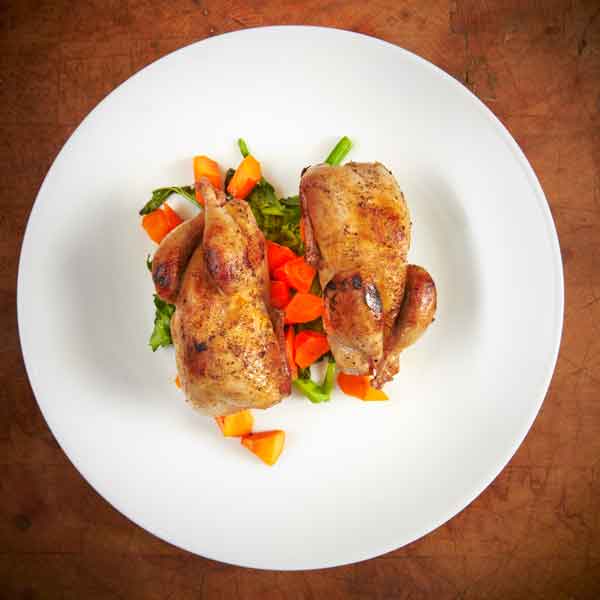 Joshua Hopkins, executive chef and co-owner of Abattoir, has built his reputation around utilizing whole animals in his cooking, crafting dishes like tripe noodle soup and duck rillettes. His upbringing prepared him well. Though he grew up in the Atlanta area, he spent holidays visiting his grandparents in rural Alabama, where hunting with his grandfather and uncle was as traditional at Christmas as attacking the presents under the twelve-foot tree. “We hunted deer, duck, quail, pheasant, and lots of squirrels,” he says. “I don’t think I could ever kill a deer again. But pheasant or quail? No problem!” Standing in front of his great-grandmother’s butcher-block table, Hopkins crumbles cornbread into a large bowl to make a stuffing for semi-boneless quail, available at specialty markets like Star Provisions. It’s the same recipe his grandmother bakes—and the cornbread is a treat on its own.

Instructions
1. Prepare cornbread: Preheat oven to 350 degrees. In a medium bowl, sift or whisk together meal, flour, sugar, pepper, and salt. Stir in eggs and buttermilk. Put shortening in a heavy 9-inch skillet; heat on top of the stove until melted and pour into batter. Mix in bacon, then pour batter into skillet. Bake 20 minutes or until cooked through. (Note: Bacon may also be stirred into the stuffing separately.) Crumble into a large mixing bowl and set aside.

2. Preheat oven to 425 degrees. In a large skillet, heat bacon fat over medium heat; add onions and celery and saute until vegetables are soft, then mix them into the cornbread. Stir in chopped sage and eggs. Add enough broth to make a very moist, but not soupy, mixture. Taste and season with salt and pepper if needed.

3. Wash and dry quail, then lay them skin-side down on work surface. Season inside and out with salt and pepper. Stuff each quail with some of the cornbread mixture. Tie legs together with kitchen twine or secure cavity shut with toothpicks. Place breast-side up in a lightly greased roasting pan and roast for 16 to 20 minutes, or until skin is nicely browned and crisp.