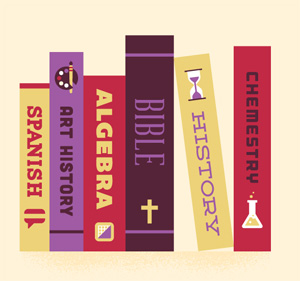 The number of Catholics in the metro area increased more than 20 percent between 2000 and 2010, and those faithful—often transplants from the Northeast and Midwest, where Catholic education is more widespread—have kept the desks filled in area schools.

Although a handful of archdiocesan schools have lost enrollment over the past few years, the majority of them are full, and overall the system is recording the highest enrollment ever, says archdiocesan schools superintendent Diane Starkovich, Ph.D. Most have waiting lists, and the admission is becoming more competitive; last year, for example, Saint Pius X had 550 applications for only 275 openings in its freshman class.
But parents don’t choose Catholic schools strictly for religious reasons. About 14 percent of students in Catholic schools aren’t Catholic. Those outside the faith are often drawn to the schools for their culture of academic rigor, athletics, and community service. The tuition is attractive too. Traditionally, Catholic schools cost less to attend than other private schools; high school tuition is $11,300 at Blessed Trinity versus $23,385 at Westminster.

In the height of their popularity in the sixties and seventies, Catholic schools employed nuns and priests as teachers and principals. Now, the vast majority of educators (at least 97 percent in Atlanta) are laypeople, which means a serious increase in salary costs. Archdiocesan schools have responded to the extra costs with minimal tuition increases, according to Starkovich, who says the archdiocese has consistently aimed for tuition hikes of less than 3 percent a year. In addition, approximately $8 million was awarded in financial aid last school year to families in the eighteen archdiocesan schools.

“We have tried to keep our schools not only accessible but also affordable,” says Starkovich. “We realize increases in tuition place hardships on families who already struggle to pay tuition in some of our schools. Therefore, we have continued to increase tuition assistance as the costs of tuition and fees have increased in our schools.”

Funds sometimes arrive from unexpected sources. Last summer, the Archdiocese of Atlanta received a significant gift from Margaret Mitchell’s nephew, Joseph. In his estate, he left a 50 percent share of the trademark and literary rights to Gone with the Wind, as well as personal items belonging to his famous aunt and more than $15 million of his own assets. Joseph Mitchell was a longtime member of the Cathedral of Christ the King.

About four miles from the cathedral, a new independent Catholic high school is set to open next school year in Midtown. Located across from the North Avenue MARTA station on West Peachtree, Cristo Rey Atlanta Jesuit High School will target primarily low-income students with a college-prep curriculum and corporate work-study program. The work will give the students job experience and help defray tuition costs. Students will attend classes four days a week and then work the fifth day. They’ll possibly have longer school days and participate in a 200-day school year versus the traditional 180 days. In other cities, Cristo Rey schools, run by Jesuit priests and brothers, have a 100 percent college placement rate and develop waiting lists.

“I see this as an opportunity to serve students we’re currently not serving,” says Starkovich. “It’s another opportunity for more Catholic students to go to a Catholic high school.”

Q&A with APS Superintendent Lisa Herring: “The work that is in front of me is vividly clear.”