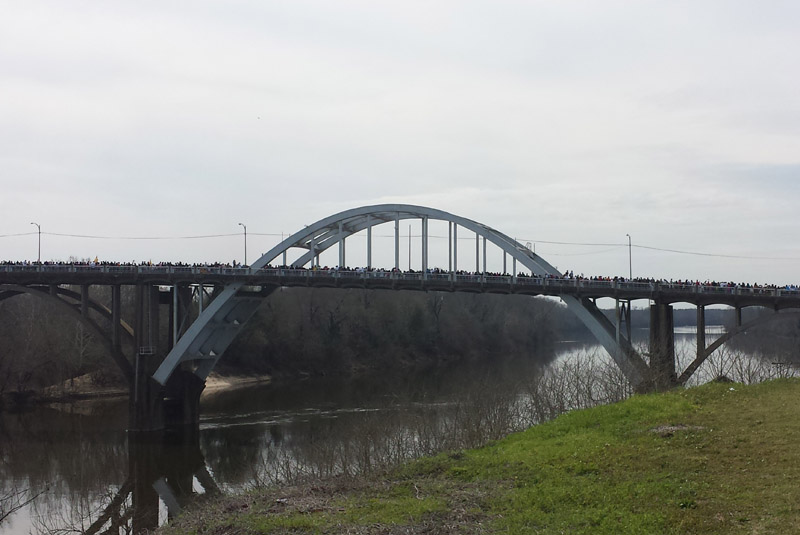 I have been to Selma, Alabama, at least three dozen times. My father grew up there with his grandparents and a gaggle of cousins. For much of his childhood, his front yard was a fifty-acre cotton field, and it was not uncommon to see a chicken running around with its head cut off.

We visited our family there twice a year for most of my youth, but it only took my father telling me one story of being chased home by white men with bats and knives and hiding under a car in a junkyard, for me to understand why he left.

My childhood memories of Selma are rooted in visiting my great aunt Sarah in her yellow and blue trailer just off of Highway 80. Half of the place was pink and half was light blue—her two favorite colors. My cousins and I played outside catching lightning bugs, shooting firecrackers, playing in the dirt, and gnashing on frozen Kool-Aid in foam cups. Going to Selma was always an escape from the daily grind, primarily because of its emptiness.

There was no Target or Starbucks, and there still is not. Selma has one of a few things and not a whole lot of anything, except history. Every year there is a commemorative march and jubilee street festival and concert to honor the civil rights activists who marched from Selma to Montgomery in 1965. This year’s fiftieth anniversary celebration brought tens of thousands of people from all over the world to march across the Edmund Pettus Bridge, as demonstrators did five decades earlier.

On Saturday, March 6, 2015, I, along with tens of thousands of others, stood in a security check line for three hours only to stand in front of a Jumbotron for another two hours in order to hear President Barack Obama speak. Congressman John Lewis introduced the president; Lewis, who along with Andrew Young and Martin Luther King Jr. marched for voting rights in 1965, said he never thought he would introduce the first African American president or be considered his hero.

Said President Obama in his speech, “Fifty years ago, registering to vote here in Selma and much of the South meant guessing the number of jellybeans in a jar or bubbles on a bar of soap. It meant risking your dignity, and sometimes, your life. What is our excuse today for not voting?” 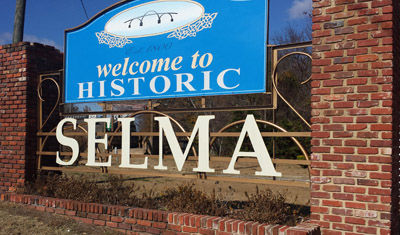 Then, on Sunday, March 7, people ages eight to eighty filled Broad Street and the surrounding areas as they walked and stood for hours. The sleepy streets of a town that time forgot were filled with food vendors, T-shirt peddlers, foot soldiers, congressmen, and people from all around the world who wanted to be a part of history. Young people carried signs and wore T-shirts bearing the slogans “Black Lives Matter” and “I can’t breathe,” references to the recent deaths of unarmed black men at the hands of police in Ferguson, Missouri, and New York, while chanting “No justice, no peace!” One group of Latino demonstrators chanted “Si se puede!” which means, “Yes we can.”

The march from Selma to Montgomery inspired people around the world to take their message to the streets. It is still inspiring movements such as the Occupy Movement and the Arab Spring. Marchers set up tent towns on the side of the road in 1965, just as occupiers set up tents in Central Park in 2011. These recent movements have been focused on creating and expanding opportunities for social mobility and economic prosperity, especially in communities of color.

Selma is a prime example of a place in need of economic help. Forty percent of the population lives below poverty level, and there are abandoned buildings everywhere. The median household income is about $22,480 per year, according to the U.S. Census, and the population is 80 percent black.

Andrew Young said in his speech at Brown Chapel Church on Sunday that “in Atlanta we were more focused on green and gold, rather than black and white.” Atlanta has become a black mecca, while places like Selma have faced population declines.

Still, there was something about walking across the Edmund Pettus Bridge that brought a sense of hope—a charge for a new generation to carry the torch and run with it. In 1965 people of color were fighting to be admitted into predominantly white colleges and universities. Today, viral videos expose fraternity members at those same universities singing, “There’ll never be a nigger in SAE.”

There is more work to be done to make this country a place where people really are judged by the content of their character. But that doesn’t mean ground has not been gained. In the words of President Obama, “If you think nothing’s changed in the past fifty years, ask somebody who lived through the Selma or Chicago or L.A. of the Fifties. Ask the female CEO who once might have been assigned to the secretarial pool if nothing’s changed. Ask your gay friend if it’s easier to be out and proud in America now than it was thirty years ago.”

That evidence exists even in the town that time forgot. George Evans, the mayor of Selma, is African American. Terri Sewell was elected in 2010 as Alabama’s first black congresswoman, representing the district that includes Selma. There is hope for us yet, as long as we do not allow the torch to be extinguished.