When it opened its doors in April 1929, the Reynolds Building was the tallest skyscraper in the South, and Winston-Salem the largest city between Washington D.C. and Atlanta. R.J. Reynolds Tobacco Company constructed the twenty-two-story Art Deco stunner as its headquarters, heralding the success of the company, which had introduced the incredibly popular Prince Albert pipe tobacco and Camel cigarettes earlier in the century. The building became a beloved local landmark, as well as the inspiration for New York’s Empire State Building.

But gradual changes in attitudes toward smoking and the subsequent downsizing of the company led R.J. Reynolds to put the iconic building on the block in 2009. Without a buyer willing to gamble on such a behemoth during the recession, it stood vacant for years. In 2015, a year after the tower was named to the National Register of Historic Places, Kimpton Hotels and Restaurants announced it would repurpose it as a boutique hotel. In April 2016, on the eighty-seventh anniversary of the Reynolds’s opening, the Kimpton Cardinal Hotel welcomed its first guests.

This evolution is only the most recent example of Winston-Salem’s tobacco-to-tourism trend. A number of local attractions, from Reynolda to Graylyn, trace their beginnings to the makers of some of America’s top tobacco products. But none illustrate this on quite so grand a scale as the Cardinal.

Named after North Carolina’s state bird, the hotel occupies the building’s first six floors. Interior spaces—from the sleek, modern guest rooms to the rec room outfitted with a bowling alley, basketball court, and adult-sized spiral slide—would be unrecognizable to the Reynolds execs who once worked there, but the grand elevator lobby maintains its original splendor. Marble floors and walls, gleaming brass and nickel elevator doors, and a ceiling studded with gilded tobacco leaves evoke the building’s glorious past.

Kimpton contributes its own nods to yesteryear in notable design elements and artwork. The living room, where guests gather for complimentary coffee and tea in the mornings and local wines in the afternoon, features a framed likeness of a longleaf pine (the state tree) rendered in matchsticks. Portraits of city namesake Colonel Joseph Winston and R.J. Reynolds are woven into the mezzanine carpets.

Off the lobby, Reynolds’s wife, Katharine, is remembered in an eponymous French brasserie, which includes a polished dining room, lively bar, and large terrace. Open for breakfast, lunch, and dinner, the restaurant offers a mix of traditional brasserie items and Southern standards—croissants and biscuits, baked escargot and fried chicken.

Learn more about Katharine and the Reynolds family on a visit to Reynolda, the thousand-acre family estate and working farm a few miles northwest of downtown Winston-Salem. Completed in 1917, the sprawling bungalow, along with the carefully designed grounds and agricultural village, was Katharine’s passion. In addition to working with an architect to create the residence and dozens of support buildings—barns, silos, schools, a post office—she introduced new agricultural methods and livestock breeds, such as Jersey cattle, to local farmers.

The estate remained in the family until 1964, when the furnished house and nineteen acres became part of a nonprofit institution dedicated to the arts and education. In 1967, that institution opened the home as the Reynolda House Museum of American Art. Celebrating the estate’s centennial anniversary this year (as well as the museum’s fiftieth), Reynolda showcases a large collection of American art from 1755 to the present, plus the home’s original furniture and the family’s vintage clothing. The surrounding farm and support buildings now serve as boutiques, art galleries, and restaurants.

Across the street from Reynolda stands another grand estate, Graylyn, the former home of Bowman Gray Sr. Once president and chairman of the board of R.J. Reynolds, Gray was responsible for the construction of the Reynolds Building. He and his wife, Nathalie, followed the Reynolds family to the countryside on the outskirts of town, purchasing eighty-seven acres of land on which to build a great manor house in the Norman Revival style. Completed in 1932, the home remained in the family for only fourteen years before a widowed Mrs. Gray and her sons donated it to Wake Forest University’s medical school, which ran a psychiatric hospital on the grounds.

Today, the university operates a hotel and conference center on the site and welcomes both daytime and overnight guests. Not to be missed is a butler-led tour of the property, which showcases an impressive range of European design styles and architectural elements, from the Georgian living room to the Italian Renaissance sunroom to the library featuring circa 1680 Louis XIV paneling from Paris. (Call ahead to reserve a time.) Another great way to experience Graylyn is the monthly Tour Pour Du Jour, which pairs a Sunday afternoon tour with a reception featuring the estate’s select house wines and cheeses.

Just up the road from Graylyn looms yet another former home of an industrial titan, the English manor–style residence of James G. Hanes, president and chairman of the board of Hanes Hosiery Mills Company. Though Hanes doesn’t have ties to the city’s tobacco heyday, his old estate currently does: Now the Southeastern Center for Contemporary Art (SECCA), it is hosting an exhibition this spring that explores cigarette machines turned art dispensers. “Art-o-mats” were developed twenty years ago by Winston-Salem artist Clark Whittington, who stocked the first such machine with small black-and-white photos mounted on blocks and installed it at local restaurant Penny University Cafe. So popular was this unusual piece of conceptual art, the restaurant’s owner asked if she could keep it. Whittington agreed and began working with other artists to create pieces for the vending machine. Today, the original Art-o-mat resides at Mary’s Gourmet Diner (the successor to Penny University), and more than 130 others have been installed at galleries, shops, and restaurants across the United States and Europe.

SECCA’s retrospective will showcase a host of the machines and the miniature works of art they dispense. It’s a wholly fitting end to your exploration of Winston-Salem, a city whose smoky past continues to burn bright. 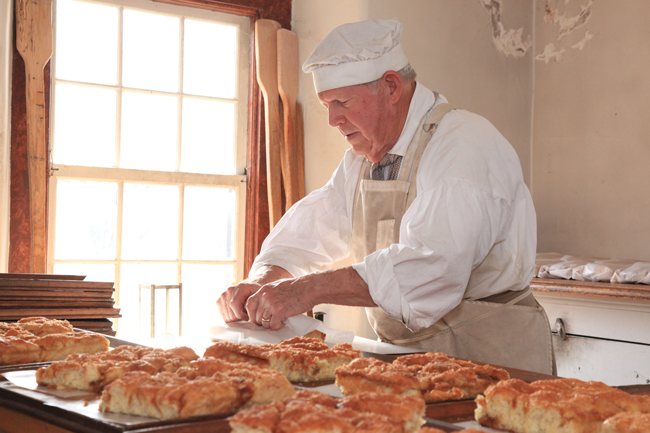 Winston-Salem’s willingness to embrace new challenges is nothing new. It dates back to 1766, when Moravians founded Salem, North Carolina. The Moravians, a Protestant denomination whose members fled to America to escape persecution in what is today the Czech Republic, were known for their hard work, love of music, and devotion to church and community.

Today, 109 of the historical settlement’s buildings have been restored or reconstructed. Fifteen of the structures are operated by Old Salem Museums and Gardens, where dozens of craftspeople and re-enactors bring the village to life. Watch shoemakers, tailors, potters, and gunsmiths ply their trades as they would have two centuries ago. Stroll the numerous gardens showcasing heirloom plants and traditional horticultural practices (such as removing weeds by hand rather than using herbicides). Plan on lunch at the Tavern in Old Salem, which serves traditional favorites such as chicken pie and syllabub, a whipped dessert featuring white wine or sherry and fresh fruit.

A number of shops offer Moravian products made on-site. Pick up handmade baskets and paper ornaments at the book and gift shop. And stock up on sugar cake and cookies at the bakery.

Before leaving Old Salem, pay a visit to the Museum of Early Southern Decorative Arts (MESDA). The institution displays one the nation’s finest collections of Southern furniture, ceramics, textiles, and other objects from the sixteenth through nineteenth centuries. oldsalem.org