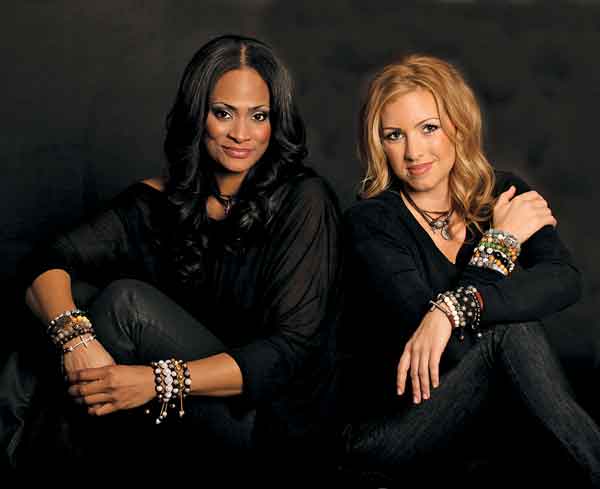 They’re called Honesty addicts—customers of Nicole Jones and Chantel Watkins’s jewelry line who pile bracelet after bracelet on their wrists. Who are they? Justin Bieber, Holly Robinson Peete, Donnie Wahlberg—just some of the celebrities who have been seduced by Honesty Jewelry’s iconoclastic designs. Made from vintage charms and flashy beads, the line sprung from a unique collaboration.
Jones, a Marietta native married to former Atlanta Brave Andruw Jones, met Watkins six years ago at a birthday party for a mutual friend. Jones was working in real estate, while Watkins’s boss was Jermaine Dupri at So So Def Records. In early 2009, they decided to parlay their love for jewelry into a brand, one they would design themselves. The duo wanted to create a line of jewelry that could easily transition from brunch to church to work, all while showcasing each woman’s individual style.
During their first year, the women hosted a trunk show at Intermix in Phipps Plaza, featuring a limited-edition line of 300 “Heal Haiti” bracelets; $5,000 of the proceeds was donated to earthquake relief. After the blog Bossip.com did a feature on the line, other blogs followed, expanding the brand’s national exposure. But their best advertising came in the form of a reality show. Two episodes of VH1’s What Chilli Wants (starring Chilli from the music group TLC) focused on the singer gifting an Honesty bracelet to her boyfriend. After the episodes aired, email inquiries jumped from 500 to 15,000 in one day. Today Honesty Jewelry is sold at specialty retailers across the country, including Lena Larose in Duluth. Among the favorites of Honesty Addicts? The Honesty Cross, a crystal pave ball and metal elastic bracelet, and the Honesty Shamballa, a knotted bracelet made from a ropelike material and the same crystal balls. Prices for these creations start at $67 and go up to $4,500 for the Diamond Collection. honestyjewelry.com
This article originally appeared in our September 2011 issue.
Advertisement