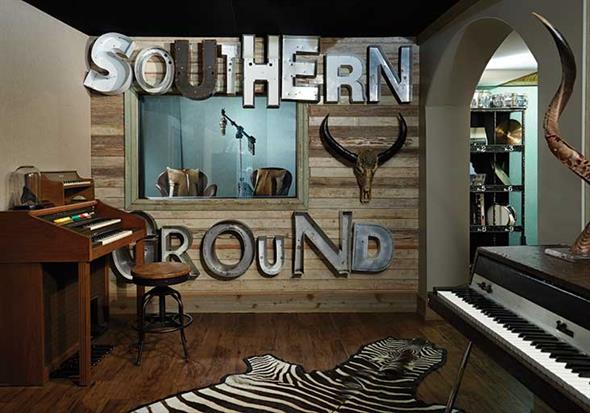 Zac Brown’s ranch house played a cameo role in his music video for “Highway 20 Ride,” but these days, the Smyrna abode functions as a recording studio for his label Southern Ground Artists. The Grammy- winning singer doesn’t live there anymore, but Brown’s basement man cave has been repurposed as an amenities-rich destination for musicians.

“A word that you hear tossed around in studios a lot is vibe,” says Tyler Walker, studio manager and recording engineer—and Brown’s best friend from high school in Lumpkin County. “We like to think that our studio is small but has a great vibe: warmth for diffusing sound, beautiful lighting, a comfortable lounge.” Musicians have access to a dedicated echo chamber and top-of-the-line gear, as well as extras such as a hot tub, SweetWater on tap, and a vintage Coca-Cola machine.

Converting the basement was not your typical remodeling project. Walker hired Atlanta interior designer Kellie Griffin Donnelly to update key areas. “A lot of what I did was space planning, so that there was more room to walk around in, without equipment on the floor,” she says. Donnelly consolidated seating in the lounge by designing a custom sectional, for instance, leaving the gathering area less cluttered.

Hundred-year-old barn wood on cabinets provides a rustic touch, and wood-paneled walls help balance acoustics, says Walker. Decorative elements give the rooms a look that’s industrial with a dash of glamour. The lounge area, for instance, features faux-crocodile wall covering in dark brown. “It’s the idea of paneling in a library, but with a twist,” says Donnelly. There’s a vintage Moroccan rug and Gothic deacon-style chairs covered in cowhide, and antique-market finds such as radio memorabilia and vintage suitcases add to the creative ambiance in a facility now nicknamed “the Crow’s Nest.” The lounge’s focal points are two custom surrealist paintings by Jay Scott Studios. A portrait of a man with a piece of fried chicken seems to reference Brown’s first number one hit, “Chicken Fried.”