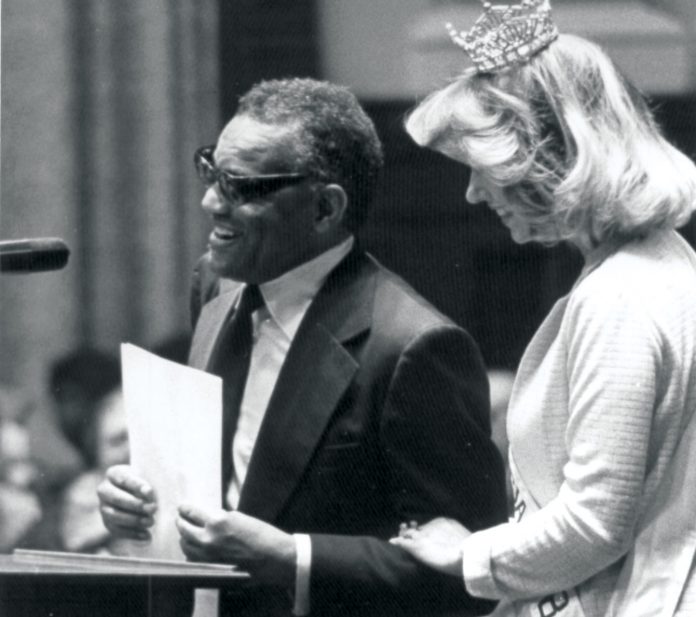 Courtesy of the Georgia Music Hall of Fame

On March 7, 1979, musician Ray Charles played an unusual venue: Georgia’s Gold Dome. Charles serenaded lawmakers with “Georgia on My Mind,” his rendition of which was named the official state song by law a month later. Although other states have official songs, Georgia’s specification of a particular performer is rare. But critics have deemed Charles’s chart-topping 1960 recording of “Georgia” the definitive interpretation, and state lawmakers concurred, passing the bill honoring him 130–10 in the House and 45–4 in the Senate.
By all accounts, Charles’s performance in the statehouse was a tender and moving scene. But it was not quite as dramatic as depicted in the Oscar-winning biopic Ray a quarter century later. In the movie, Charles is invited to play for lawmakers as part of an apology for being “banned for life” from his native state because of refusing to play a segregated Augusta venue in 1961, a move that triggered riotous student protests. The Augusta Chronicle did some archival rooting around when the movie was released and found no evidence to back up the cinematic story line. Yes, a 1961 Bell Auditorium show was canceled, and yes, Charles was sued for breaching a contract and refusing to comply with segregated seating in the theater. But while students at historically black Paine College played a role in Charles’s concert cancellation, they did not take to the streets, but instead dispatched a rep to send Charles a telegram summarizing their concerns about the auditorium.
Even if the Hollywood hoopla is false, it’s true that Charles continued to earn accolades from his home state. A few months after the Gold Dome performance, Charles was an inaugural inductee into the Georgia Music Hall of Fame.

This article originally ran in the March 2011 issue.