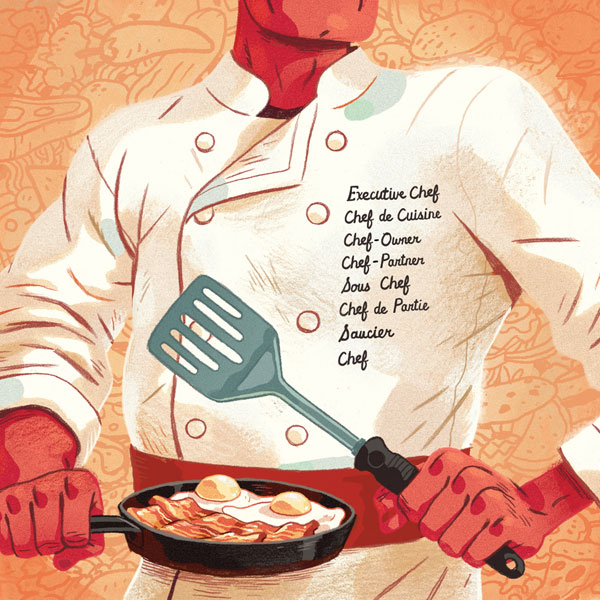 I’m puzzled by all the variations of chefs’ titles I see on menus these days. What exactly are the differences between an executive chef, a chef de cuisine, a chef-owner, and a chef-partner?

Culinary schools may be the last places where a system that resembles the classic French brigade culture still exists. Job descriptions such as chef de cuisine (the person responsible for the operation of the entire kitchen), sous chef (the second in command), and chef de partie (a line cook in charge of a particular area of production) still have clear meanings there. In actual restaurants, the lines blur, especially since many chefs now oversee more than one restaurant and/or create menus for kitchens where they barely have a physical presence.

Most perplexing of all is the popularity of the “executive chef” label, which formerly referred to a largely administrative position within a hotel or large food operation, but now often seems to be a self-imposed status symbol for head honchos. On the one hand, there’s someone like Shane Devereux, who makes the culinary decisions—food concepts, menu planning or approval, hiring and firing—for Top Flr, the Sound Table, and the Lawrence. The most ambitious of the three, the Lawrence, has a chef de cuisine and two sous chefs on staff to assist Devereux and occasionally take over the kitchen in his absence. His moniker makes sense in that context. But at single-location restaurants—I’m thinking of Joe Truex at the new Watershed on Peachtree and Kevin Gillespie, who is frequently absent during service from Woodfire Grill, as two examples—the title feels like grade inflation to me.

Ownership brings another layer of complication. At Empire State South, Hugh Acheson, who also owns two restaurants in Athens, identifies as “partner chef,” while Ryan Smith is the executive chef in charge of its thirty-four-member
kitchen staff (ESS serves breakfast, lunch, and dinner). Anne Quatrano and Clifford Harrison call themselves “chef-
owners” to describe their intense, hands-on involvement at Bacchanalia, Floataway Cafe, and Abattoir, all of which also have cooks helping to run the restaurants. Surely those titles ring with more honesty than when Richard Blais is referenced as “chef-owner” of the Spence, which is equally run by the Concentrics Restaurants group—though its name isn’t listed on the menu alongside Blais’s.

On the other hand, Billy Allin of Cakes & Ale, Steven Satterfield of Miller Union, and Hector Santiago of Pura Vida all want to be known simply as “chefs” of their restaurants, despite being co-owners themselves. Nick Oltarsh of Lobby at Twelve and Room at Twelve, both also operated by Concentrics, says that the only person who regularly calls him “chef” is his wife when she’s making a request, like “Chef, take the laundry out of the dryer.” Eddie Hernandez, cofounder of Taqueria del Sol and developer of all recipes for the corporation and its franchisees, prefers not to flaunt a title. “People in the restaurant ask me for more chips all the time,” he says with a carefree laugh. “They think I am just the busboy.” In this age of celebrity, when “executive chef” strikes me as more of a branding ploy than an accurate job description, I admire the leaders who show a bit of humility in their job titles.