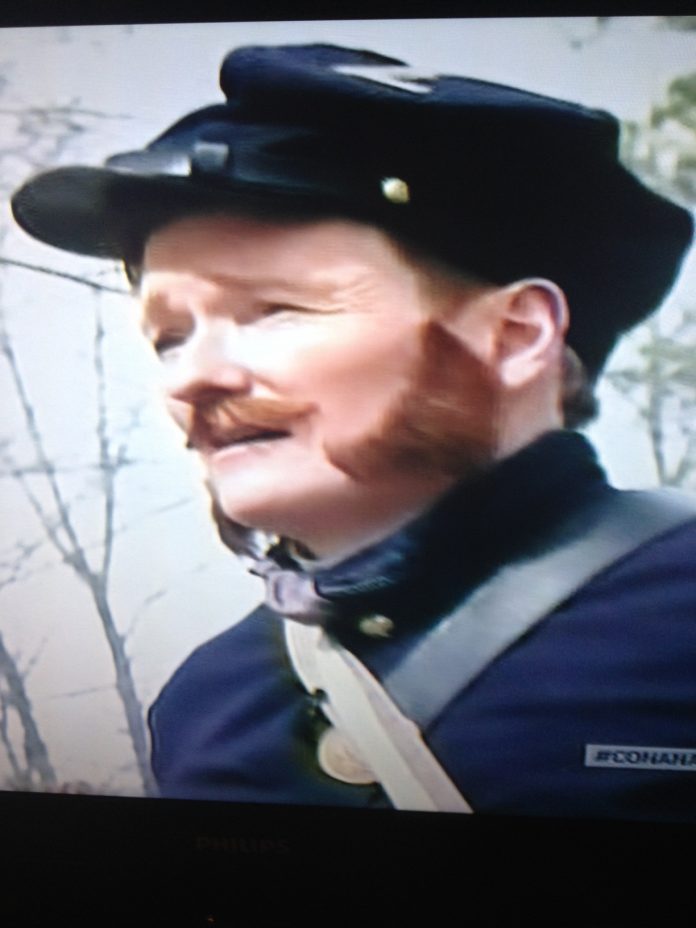 The most Atlanta-centric moments from Tuesday night’s “Conan” on TBS, shooting episodes this week at the Tabernacle downtown.

Best monologue jokes: On Southern audiences: “You Atlanta crowds are loud. I don’t know if this is a late night talk show or a monster truck rally.”

On the Braves one game winning streak: “Last night I did a show here and the Braves won their first game of the season. This morning I got a phone call from Braves manager Fredi Gonzalez. I’d like to announce I’m doing 161 more shows here. We’re going to keep this streak going!”

On fans doing the Tomahawk Chop in the audience: “Stop it. You have no idea how creepy that looks. It’s weird to be on this side of that. It doesn’t look friendly.”

On confusing street names: “There are 65 streets in this city named Peachtree. I punched ‘Peachtree’ into my GPS. It committed suicide.”

Taped piece: Conan hangs with Civil War re-enactors at the Battle of Resaca. Captain Mike McHan, who is sporting a gold hoop earring, immediately bans O’Brien’s hand moisturizer and lip balm, citing its lack of period authenticity. O’Brien’s retort: “Oh, so you just criticized me for wearing lip balm and you’re dressed like a pirate who’s about to go clubbing.” After sharing his hand cream with his fellow Union soldiers, O’Brien wipes out a band of invading rebels with a machine gun.

Best Ted Turner impersonation: “Saturday Night Live” alum Will Forte, sporting a denim shirt, rides into the Tabernacle on a “stuffed aluminum bison on wheels” named Teddy Jr. “Shuddup, you decaying lamp post,” Forte as Turner screeches to O’Brien. He then ticks off plenty of local sites for Conan to check out: “Of course, the most popular tourist attraction is Ted’s Montana Grill.” Forte then proceeds to botch the name of the Georgia Aquarium, calling it The Georgia Museum. Laughing, O’Brien tells Forte: I’m not editing this.” Recovering, Forte adds: “In that case, check out the Georgia Aquarium. It’s the largest in the world and the only one to feature an underwater Ted’s Montana Grill.” As a Photoshopped picture of an underwater bison emporium flashes on the screen, Forte exits, saying: “What’s that Teddy Jr.? Conan, We gotta go. They’re opening up a Ted’s Montana Grill inside Jane Fonda.”

Best “Walking Dead” cameo: Actors Melissa McBride (Carol) and Michael Rooker (RIP Merle) show up inside the Tabernacle interrupting the show while fleeing walkers out on Luckie Street. They manage to shoot sidekick Andy Richter twice in the chest as he says, “We’ve got a real Georgia peach of a show tonight.” “What was that?” Conan yells. Merle’s reply: “What was that?! That was a bad [expletive] joke!” The pair then take an audience member hostage and run out.

Musical Guests: Atlanta’s own acoustic quartet Von Grey featuring sisters Kathryn, Annika, Fiona and Petra playing their single, “Coming for You.” After the show, the excited teens posted a photo with O’Brien on Instagram. 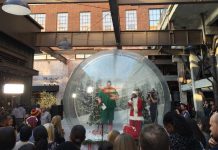 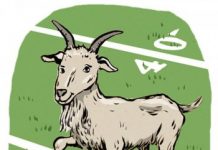