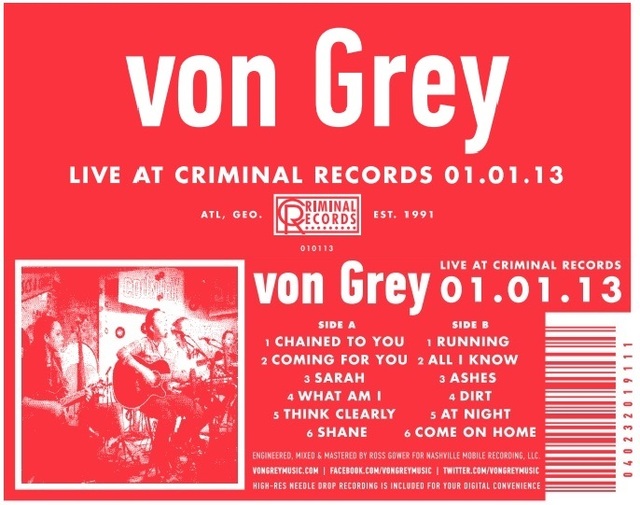 When you’re a co-founder of the now globally celebrated Record Store Day, you’re expected to step up your game for Saturday’s sixth annual nerd holiday. Criminal Records owner Eric Levin is doing just that via the first two vinyl releases on his new limited-run, boutique LP series, Live at Criminal Records. Accompanying the new live recordings of in-store sets by up-and-coming Atlanta acts Von Grey and Christ, Lord, fans who buy the LPs in advance will also get into an after-hours Saturday gig when the store closes at 8 p.m. for a VIP show with the two acts, along with Mood Rings. Of planning for his sixth annual Record Store Day, Levin reflects: “It’s astonishing, I didn’t think anyone would care and now it’s become this huge thing.”

Christ, Lord and Von Grey are both faves of Levin’s and while the singing sisters in Von Grey have appeared on The Late Show with David Letterman and Conan this year and Christ, Lord has a heady touring schedule, both acts remain unsigned which made the negotiations for putting their music out on the Live at Criminal Records series easy. Explains Levin: “These are going to be small print runs, 300 to 500 to 1,000 and the bands will have them to sell on the road and we’ll have digital editions that will be released internationally where the money goes back to the bands so they can make more records. We just made everything as simple as possible. I just wish I could go back in time over the last 20 years and record every band that has performed an in-store at Criminal.”

Levin says he’s just following the business model first established by his Little Five Points neighbor, Wax n Facts owner Danny Beard, who first began pressing up B-52’s and Swimming Pool Q’s 45s and Pylon LPs via his indie DB Recs label in the 1970s. “It’s so old-fashioned,” Levin laughs. “It goes right back to the beginning and what Danny did so well. It just took me longer. It took me 20 years to figure out, ‘Oh, yeah, why don’t I make records?!’” (Beard and the Q’s themselves, of course, are still rocking. The Swimming Pool Q’s will be greeting fans and signing copies of a new deluxe Q’s set, The A&M Years: 1984-1986 at Wax n Facts Saturday at 5 p.m.).

Levin acknowledges it doesn’t hurt that a new generation has been turned onto the vinyl, the once almost-extinct music format Criminal Records excels at selling. “This is a generation — and I’m guilty of it too — that has largely cherry-picked what they want to listen to,” Levin says. “With a record, you can put it on and not worry about ‘What do I listen to next?’ You’re good for the next 45 minutes.”

After a well-publicized financial downturn two years ago and a successful “Save Criminal Records” Facebook campaign, Levin is happy to report sales at the store have stabilized: “I don’t want to say we’re doing really well because businesses like Coca-Cola are doing really well. But for an independent business, it’s full steam ahead now. We’ve just signed a really long lease in our location [at 1154 Euclid Avenue] and business has picked up. That’s all we needed. I lay this 100 percent at the feet of Atlanta. We were honestly standing there wondering if record stores like ours were still needed and once the word went out that we were in trouble, a switch was flipped. Once you reminded people about the importance of buying local, the city responded. Sometimes, it’s incredibly beneficial to tell people, “Oh, shit. We’re in trouble here.’”