After a long holiday weekend filled with speculation from Q100 listeners, Bert Show cast member Jenn Hobby announced on-air Monday morning that she will exit the popular morning show next month. In an exclusive interview with Atlanta magazine Sunday, Hobby, who is pregnant with her first child, discussed the reasons for her departure.

“Like a lot of people in the media, when your contract is up, you need to decide whether to stay or go,” Hobby explains. “For me, it was an opportunity to take a look at the last 10 years and realize what an incredible decade it’s been for me but I feel like it’s time for me to grow.”

The Bert Show member has been working without a contract with Cumulus Media since September. In October, she announced on-air that she and husband Grant Rivera, principal at Westlake High School in Fulton County, are pregnant with their first child.

I’m a little over 19 weeks which is how mommies start talking,” Hobby says. “Everything becomes about how many weeks you are.” The baby is due in April.

This week, Hobby says she and Rivera have a doctor’s appointment to learn the sex of the baby and will ask to have the results sealed up in an envelope. The couple, along with the baby’s grandparents-to-be, will read the results together on Christmas morning.

Between 10 years of early AM air shifts at Q100, Hobby has also dabbled in TV as a featured commentator on HLN’s Prime News segments, as a guest host on 11 Alive News and, most notably, sitting in a chair next to Regis Philbin as a “Women of Radio Co-Host Search” contest winner on “Live With Regis & Kelly” in 2010. Hobby says in addition to impending motherhood, she plans to stay in broadcasting and will make an announcement about what’s next for her later this week. “All I can say right now is that I’ll be a working mom and that I’ll be staying in broadcasting,” she says.

Hobby started out as Q100’s promotions director in 2002 but stepped into an on-air role when Bert Show newscaster Melissa Carter took a leave of absence for a kidney transplant. Over the decade, Hobby has leapt out of a plane live on the air during a skydive, flirted with her celebrity crush, chiseled “American Pie” actor Seann William Scott, discussed her and Rivera’s struggles with infertility and shared painful details of her 2008 divorce from Sister Hazel guitarist Ryan Newell with Q100 listeners. For the past month, she’s been sharing insights about her pregnancy. “Every day it becomes more and more real,” she says laughing. “As my body changes and I look at this increasing bump and my clothes don’t fit anymore, I realize there’s a reason why you’re pregnant for 40 weeks. It takes that long to adjust to the changes in your life that are coming, along with this new little person. But even with all those changes, we’re really blessed.”

Hobby says the toughest part of this morning’s announcement will be saying so long to listeners and to her co-workers Bert Weiss, Jeff Dauler and Kristin Klingshirn. But the broadcaster who has often joked about her free-flowing tears on air says that Dauler should only bring a medium size box of tissues into the studio this morning for the big announcement.

Reflects Hobby: “I feel so blessed to have been a part of the Bert Show family and to have had this opportunity in radio for a decade. I realize how lucky I’ve been and how unique this job is in an industry where a lot of people don’t get to work on this kind of show. I’m very grateful. I’m sure I’ll be emotional on Monday morning when the time comes but I’m at peace with my decision and the opportunity to grow into something new is very exciting. This is the right decision for me as a career woman and for me and my husband as we start a family.” 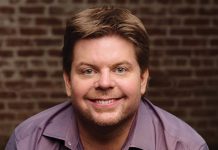 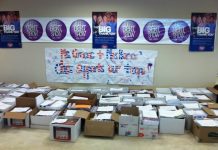