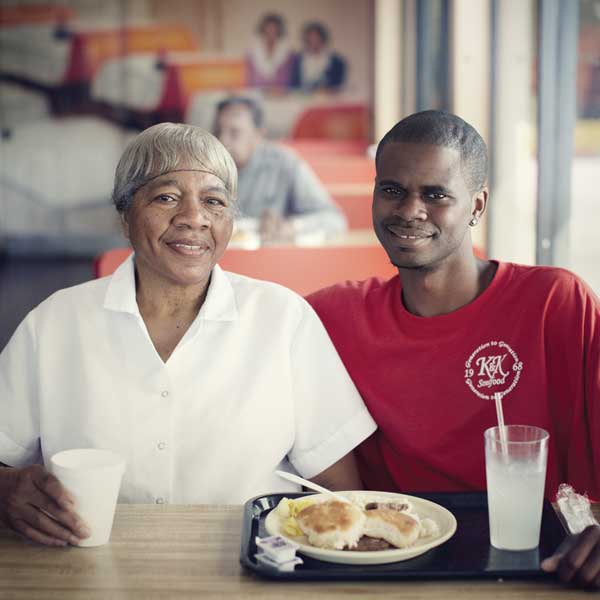 The neighborhood around K&K Soul Food, just west of Downtown, hasn’t changed much since Bankhead Highway became Donald Lee Hollowell Parkway, in honor of the civil rights lawyer, in 1998. Neither has this modest cafeteria, which was originally named Bankhead Restaurant and has been in the hands of the same family since the late 1960s. With my Parisian roots, I may not fit the expected profile of a soul food devotee. Yet the minute I tasted my first fried pork chop and caught an intoxicating whiff of turnip greens at Paschals’ Motor Hotel and Restaurant near Clark College in the mid-1970s, I have been in love with the Southern specialties served in African American–owned meat-and-twos around town. Less expensive than the Busy Bee in West End and more generous with its portions than the Beautiful Restaurant in Cascade Heights, K&K moves a constant stream of bus drivers, corrections officers, blue-collar workers, students from the nearby hairstyling school, and older local residents through its efficient line.

The restaurant opens at 5:30 a.m. Tuesday to Saturday, and breakfast, served until 11:30 a.m., can include a plate of crunchy fatback, plump split sausages, plain grits, and biscuits, all for less than $5. I prefer to show up just as the line forms for lunch, with bins of pig’s feet, oxtails, chicken gizzards (one of my favorites), and stewed pork neck bones filling the long steam table. For those less inclined to offal, there’s smothered pork chops, turkey with dressing, and an ever-changing slew of Southern sides like greens, mac and cheese, and sweet potatoes. The spaghetti baked with meat sauce is like something you’d find at a church supper.

A cheerful painted mural dominates one wall in the dining room, depicting K&K’s founders and longtime regulars eating at tables and in orange booths that mirror the restaurant’s actual furniture. I sit down with my heavy Styrofoam box, in which a sheet of waxed paper divides the corn muffins and the plastic silverware from the boiled okra, squash casserole, and meaty stews I favor. And then I bask in the heavenly scent of rich foods that connect me to Atlanta’s past and that are slowly, sadly disappearing from the dining landscape. 881 Donald Lee Hollowell Parkway, 404-685-1073