Home Eldredge ATL For one night only, reliving Rich’s Fashionata 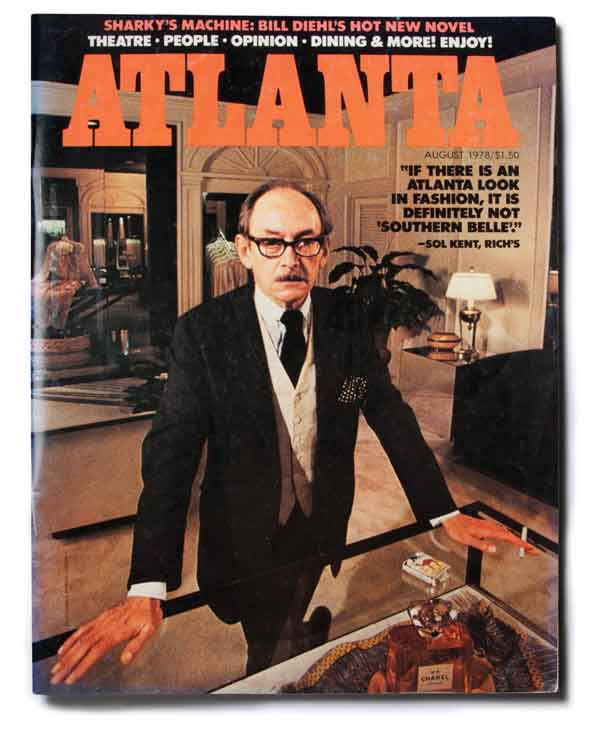 Of his legendary style sense, Rich’s fashion director Sol Kent once wryly observed to Atlanta Constitution columnist Celestine Sibley, “There’s nothing so unchic as a woman who looks too new.” Kent’s genius at merging the new with the traditional and his eye for discovering future classics will be on dazzling display at tonight’s tribute to his career, “Be Divine: A Tribute to Fashionata” at the William Breman Jewish Heritage Museum in Midtown. The evening benefiting the Breman also serves as a social set finale for the museum’s six month-long “Return to Rich’s: The Story Behind the Store” retrospective set to close on May 27.

From 1957 to 1991, Kent not only oversaw but ultimately transformed Rich’s Fashionata, the Atlanta department store’s signature runway show. In the process, he introduced Atlantans and the American South to the Parisian delights of Christian Dior and the allure of Oscar de la Renta. Kent died in 2001.

“Attending Fashionata was like attending a Broadway show,” recalls retired Atlanta Journal-Constitution fashion editor Marylin Johnson, who covered Fashionata and Kent’s career for decades. “It was truly a spectacle. He brought top designers like Bill Blass into Atlanta in an era when nobody was doing that.”

“He was truly an impresario,” his widow Irene Kent reflects. “He did it all. He flew everywhere to select the clothes. He taught the mannequins how to walk. He knew every song to every musical. When he was selecting music for the show, he would bring it home and we’d try it out, dancing together in the sunroom. He was an incredible dancer. He was learning the tango the night I met him in 1948. He was a frustrated showman, to be honest with you.”

Tonight’s runway show will feature frocks from the 1960s, 1970s and the 1980s, Fashionata’s heyday in Atlanta when the annual show, held at Symphony Hall or the Fox Theatre, was a guaranteed sell out. “Be Divine” host committee member and Carter-Barnes Hair Artisans co-owner Carey Carter helped curate the fashions for the show. For more than two decades, on the eve of Fashionata, Carter, the event’s chief stylist and business partner Mitchell Barnes — sketch pads in hand — would meet with Kent and go through the entire show piece by piece.

“He handpicked every single outfit,” recalls Carter. “He could get any piece of clothing and any designer anywhere in the world. He could write his own ticket. Selecting the fashions for this tribute is a bit of déjà vu for Mitchell and myself. Because we went through the show each year with him, his sense of style and his tastes have remained with us. It often came down to how busy the pattern was. He didn’t like a lot of pattern. He preferred neutrals and classic cuts.”

Catwalk Productions owner Randi Layne is assembling tonight’s show. The Atlanta fashion model first met Kent in 1980 when she walked in her first Fashionata. And she would escort Kent across the stage when he took his final bow before retiring in 1991. “I’m a wreck!” Layne allows with a laugh. I’m honored, humbled and at times, paralyzed to make decisions because I want this to be the perfect tribute to Mr. Kent. I’ve been working on the music for the show this week and I’ve been crying my eyes out. There will be a lot of recognizable numbers in the show, all his favorite show tunes and crooners. We reached out to some amazing vintage stores and found some spectacular outfits, including a Chloe suit from the 1980s with the Rich’s tags still on it! Every vintage piece in this show could be worn today. Mr. Kent’s taste is classic and timeless.”

Kent also worked his magic off the runway, bringing a new level of sophistication to Southern closets. He consulted with Coretta Scott King on the outfit she would wear to her husband’s 1964 Nobel Peace Prize ceremony in Sweden (he recommended a cloth coat for the December event, and she agreed).

“He had a coterie of ladies at Rich’s who wouldn’t buy a handkerchief without him,” says Irene Kent. “He was aware of the impact he was making but he was a very modest man, very practical and very honest about fashion.”

“He ruled the Rich’s Regency Room,” remembers Carter. “If a customer came out in a particular outfit and it just didn’t work, it didn’t matter what the price tag said. He’d say ‘No’ and you’d put it back on the rack immediately. He really had that je ne sais quoi about him.”

Kent also boosted a few careers along the way. “I first met him when I was 19 and a measly little hairdresser at Rich’s,” says Carey Carter. “At the time, stylists from New York were flying down each year for Fashionata but Sol wasn’t terribly pleased with them. So he asked me if I would assist one year.” Carter and Barnes ended up with the gig for decades. “Doing hair for Fashionata was the crème dela crème assignment. It helped to launch me in this industry.” Adds Layne: “Being naïve, I didn’t realize how extraordinary Fashionata was that first year in 1980. But it really hit home as soon as I stepped off the runway.”

Layne, Carter and Irene Kent urge attendees at tonight’s “Be Divine: A Tribute to Fashionata” to bring along one of those Sol Kent-selected handkerchiefs, too. There will be film footage of the man himself and some emotional moments for those old enough to recall ordering Rich’s famous frozen fruit salad. Previews Carter: “It’s a walk down memory lane, not just because we’re honoring Sol Kent and Fashionata but because of the dynasty of Rich’s. We’re also honoring every mama and every daughter who ever boarded the train from Macon and came into Atlanta and experienced a fashion show at Rich’s and then went off to have lunch in the Magnolia Room. It’s about honoring an era.”

To purchase tickets to tonight’s “Be Divine: A Tribute to Fashionata,” a benefit for the William Breman Jewish Heritage Museum ($180 a piece or $300 per couple), go to the museum’s official website or phone: 678-222-3700.

In 2011, Rich’s influential fashion director Sol Kent was selected as one of Atlanta magazine’s 50 Who Made Atlanta as part of our 50th anniversary celebration. Click here to read our tribute.

Main photo: The Be Divine host committee with Mrs. Kent (center).
Above photo: Sol Kent on the August 1978 cover of Atlanta magazine.