Home History The iconic Randolph-Lucas House has found a savior 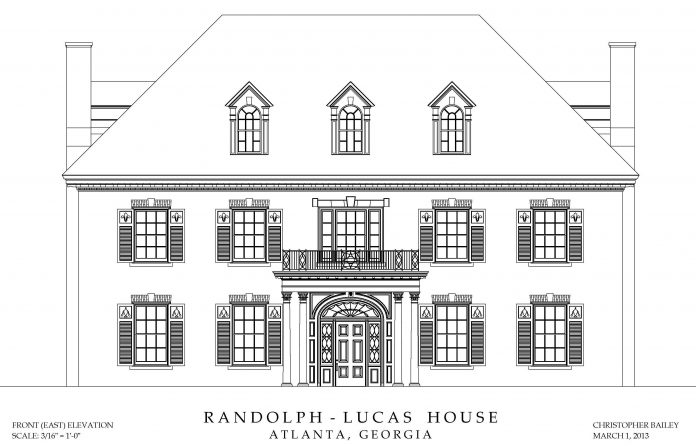 The beleaguered but beloved red brick mansion on Peachtree Road at Lindbergh Drive has finally found a savior. This summer, NewTown Partners, an Atlanta-based economic development consulting firm specializing in historic preservation, will move the home to 78 Peachtree Circle, an empty lot in Ansley Park, where it will become the private home of company founders Christopher Jones and Roger Smith.

The iconic Randolph-Lucas House, which figured prominently in the Anne Rivers Siddons novel Peachtree Road, was owned by the 2500 Peachtree Road Condominium Association, which obtained a demolition permit last fall in order to build a new pavilion.

Desperate to save the 1924 structure, the Buckhead Heritage Society had offered to give the home—free of charge—to anyone able to move it. In January, Buckhead Heritage, the City of Atlanta, and the condo association selected NewTown’s proposal. Since then, the firm has been working with JTM House Movers to coordinate logistics—which will involve relocating aerial utility lines and even building a temporary road through the large vacant lot across from the High Museum, which backs up to the new address. (The structure was actually moved once before—several dozen feet when the condominiums were built in 1998.)

The home was built for Thomas Jefferson’s great-great-grandson Hollins Randolph. Atlanta architect P. Thornton Marye, who also helped build the Fox Theatre, designed the Georgian-Revival style home to resemble Randolph’s ancestral home near Charlottesville, Virginia. Margaret Lucas purchased the home in 1935 and lived there until her death in 1987. Afterward, the home served as a special events facility and an office, but it has been unused in recent years. In its new location, an historic façade easement will prevent future demolition.