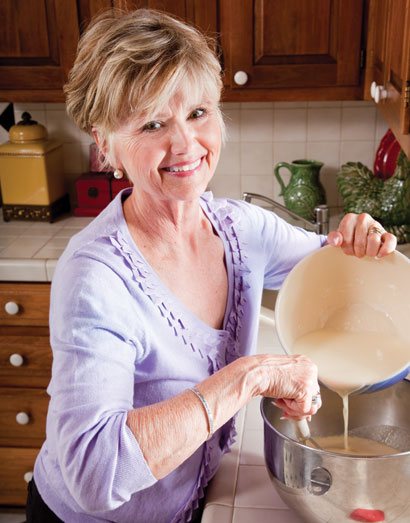 This month Johnnie Gabriel releases her second cookbook, Second Helpings (Thomas Nelson, $24.99). Her first, Cooking in the South with Johnnie Gabriel (2008), has sold more than 50,000 copies. She and her husband Ed own Gabriel’s Desserts, a Marietta cafe and bakery that has garnered national attention—thanks in part to cross-promotion by Johnnie’s famous cousin, Paula Deen.

You didn’t start out to be a professional cook. How did you end up doing this? Need. We were in that recession that began in the late eighties. My husband was a builder, and we had houses sitting. We quickly went through any money that we had. [My daughter] Laura was at Georgia, and I needed to pay her rent. There was a lady here, Mary Moon, known as Marietta’s Cake Lady. We all bought cakes from her. When she decided to retire, I asked if she’d sell me her recipes. She said, “Oh honey, I’m going to give you these recipes. Nobody in my family wants to work that hard.” Should’ve known right then. We baked them out of the house. Ed had been playing golf at Marietta Country Club, and I’d been playing tennis for years. All of a sudden we’re both giving up the golf and the tennis and baking at night and working during the day. There was a little dry cleaners down on Whitlock Avenue, and we put a bakers rack in his shop. I would box up the cakes and wrap them, and people would come by and pick them up. I would give the dry-cleaning man a dollar for every box.

What is your most popular dessert? The fresh strawberry cake.

You serve lunch and dinner now. Is your first love still baking? Baking is much more disciplined, so I like that aspect. I get in the kitchen, and I can’t be interrupted. You have to mix everything right, you’ve got to get it in the oven, you’ve got to get it out. But the savory cooking is creative. If I do a new recipe, I always make it just like the recipe says the first time. Then you start to play and add your own little touch, make it your own. That’s the fun part.

Were you and Paula close? We were close in the early years. We reconnected in our fifties. She really hit hard times. I was not aware of that. I was living pretty much the good life up here. The next thing I knew, Paula’s Aunt Peggy called me and said Paula had a restaurant and was writing a cookbook. What about some of my dessert recipes for her cookbook? When we first got together, she was negotiating with the Food Network. She was just on the cusp. She had worked hard and fried many a chicken.