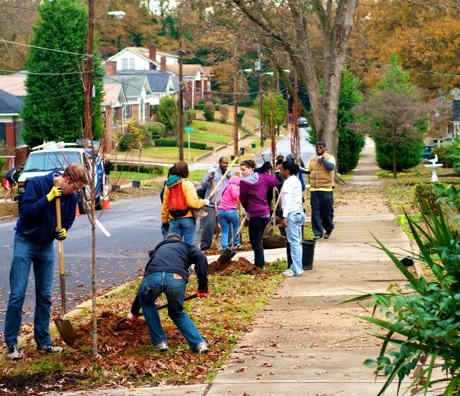 On Thursday, staff and volunteers with Trees Atlanta will head out to perform a routine task: plant a tree. That particular sapling will be a special one, the 100,000th tree planted since Trees Atlanta was founded in 1985 by Central Atlanta Progress, the Atlanta Parks Commission, and the Junior League of Atlanta. The organization was formed in response to massive tree loss cause by urban development in Atlanta.

Twenty-nine years later, the environmental outreach project continues, but has defined its mission beyond the roots and branches of the city’s tree canopy. “We’ve got this phrase, ‘we don’t just plant trees, we plant communities.’ And really that’s what we’ve noticed,” says Trees Atlanta community manager Bethany Clark.

Trees Atlanta and its team of 4,500 volunteers have distributed trees to more than 100 neighborhoods inside the perimeter. Although the organization’s focus has been on the city proper, the milestone 100,000th planting marks a plan to expand. Last October, Trees Atlanta completed its first project outside I-285 when volunteers helped plant 300 trees in Dunwoody’s Brook Run Park—Trees Atlanta’s single largest planting to date. Inside 285, the organization has partnered with the Atlanta BeltLine and the City of Atlanta to create the Atlanta BeltLine Arboretum, an educational array of trees and plants that will extend along the trail.

Trees Atlanta is celebrating the milestone on Thursday with an event at Greystone in Piedmont Park. Mayor Kasim Reed is slated to be on hand to help plant the 100,000th tree.