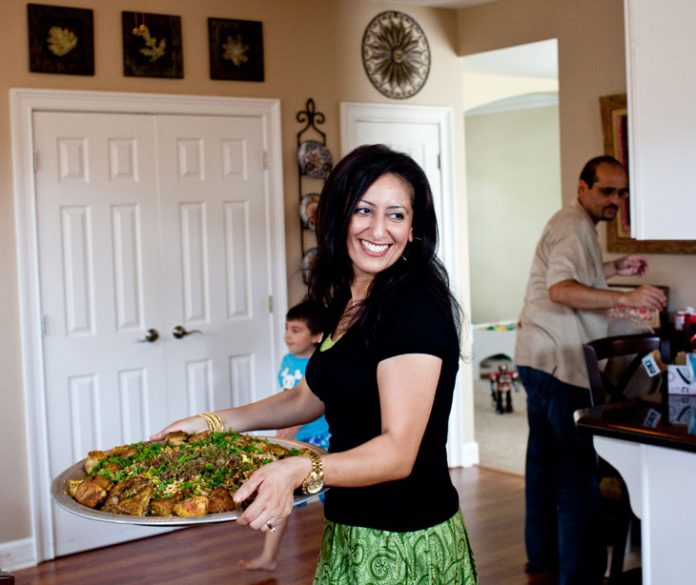 During Ramadan, the month of fasting that is one of Islam’s pillars (or essential acts of faith), Ghada Elnajjar and her husband, Nidal Ibrahim, rise before the first light of daybreak at their Norcross home. They eat sustaining foods for suhoor, the morning meal: Fava beans and hummus are traditional in the Middle East, but Elnajjar, who moved to the U.S. from Palestine when she was eleven, prefers peanut butter with pita bread. Ibrahim often opts for labneh, the Palestinian version of Greek (strained) yogurt. Then, like millions of other Muslims around the world, they refrain from food and water from dawn until the sun sets—a fifteen-hour stretch in the Georgia summertime.

Ramadan falls in the ninth month of the Islamic, lunar-based calendar. Because a lunar month is about a day shorter than a solar month, Ramadan moves up by ten or eleven days annually, revolving completely through the standard calendar every thirty-three years. For the first time since 1980, Ramadan is straddling July and August. For Muslims who need to carry on with their usual hectic job schedules, abstaining can be especially tough. “When you’re fasting, it feels like your brain is no longer yours,” says Elnajjar, who works as communications manager for the Islamic Speakers Bureau of Atlanta. “It feels like prayer and meditation are the only things you can do.”

Many Muslims break the daily fast by praying at their local mosque and then sipping water and eating dates, as the prophet Muhammad first did around 610 A.D. Mosques like the Atlanta Masjid of Al-Islam near East Lake and Al-Farooq Masjid on Fourteenth Street in Westside serve iftar—the evening meal—to their communities. Elnajjar and Ibrahim break the fast at home, starting with dates, then soup or broth to warm their empty stomachs, and then perhaps a roast chicken or eggplant stuffed with rice and ground beef.

Though strictly observant of Ramadan, Elnajjar and Ibrahim attend services only a few times a year. “You know how some Christians go to church every Sunday but some go only on Easter and Christmas? That’s us. We go to the mosque on special occasions,” Elnajjar says. Eid al-Fitr, commonly shortened to “Eid” (pronounced “eed” or “AYE-eed”), is one of the don’t-miss holidays. It translates as “the feast of breaking the fast,” the celebration that begins the day after Ramadan ends. Elnajjar, Ibrahim, and their two young children put on new clothes as part of tradition, eat a small breakfast, and then join the congregation at Masjid Al-Farooq to recite Eid prayers.

Eid is a day for visiting family, though as a modern adaptation when relatives are often in other states or countries, many Muslims host gatherings for friends at their homes (and kids take the day off from school). I attended an Eid celebration at Elnajjar and Ibrahim’s house last year. They had invited over colleagues and friends who hailed from Egypt, Palestine, Syria, and Lebanon. Elnajjar and the other women laid out a lush spread fragrant with herbs and sweet spices: hashweh, a platter of rice dyed yellow with turmeric, covered with ground beef and almonds, and surrounded with roasted chicken legs; macaroni béchamel, an Egyptian dish of penne pasta and ground meat in a white sauce tinged with nutmeg (similar to Greek pastitsio); grape leaves stuffed with rice and beef; quinoa with raisins, which Elnajjar felt was a healthier alternative to couscous; and a simple salad. Sweets are a mainstay at Eid festivities, and the day’s showstopper was kanafeh, a tray containing shredded phyllo dough, bright orange from food coloring, layered with soft, oozing-hot cheese, brushed with warm sugar syrup, and topped with mounds of crushed pistachios.

I heaped my red plastic plate like it was Thanksgiving. Then I looked around while others began to eat: Their plates held less than half of the food that mine did. The man next to me, Yusuf Mohamed, nodded and sighed. “You wait thirty days for this beef, for this whole feast, but then your stomach has shrunk,” he said. Later, though, I did notice that most of the guests managed to scarf down a hefty slice of kanafeh.

Scenes from a Ramadan Iftar meal in metro Atlanta 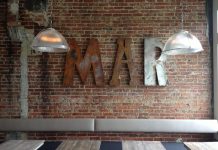