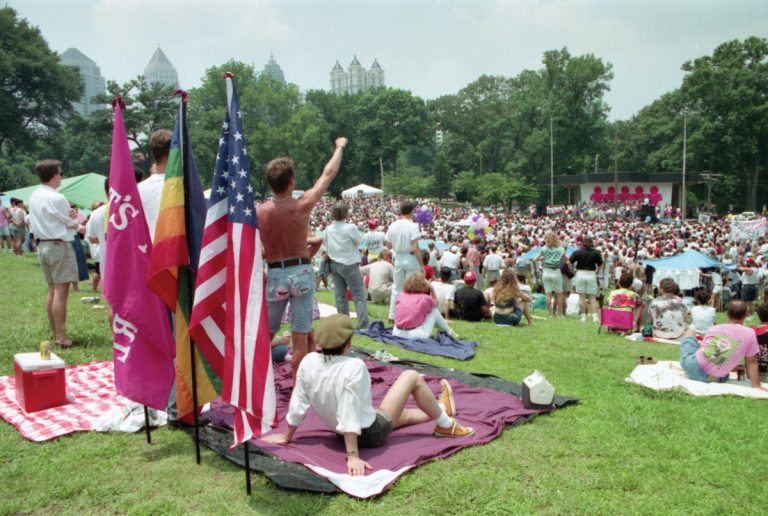 Atlanta Pride. It is as much an aspiration of what Atlanta’s LGBTQ+ community can be as it is an articulation of what it is today. It is an emblem of queer visibility and power, a celebration of liberty and key victories over stigma and legalized oppression. It is unmistakably American in its triumphs and in its failures. It has strived toward worthy ideals—yet it has reneged on its central promise of inclusion.

From its beginnings as a grassroots protest to its current status as a corporate-sponsored festival and year-round service organization, Atlanta Pride has been seen largely as a white, cisgender, male–centered space in a city known as the Black (and “Black Gay”) Mecca. Long before Black Pride was founded in 1996, many Black folks read Atlanta Pride like other Pride organizations across the country: inherently designed to honor queer whiteness, with little interest in Black participation. Despite the increased numbers of Black attendees; numerous partnerships with Black organizations, including In the Life Atlanta (the original organizers of Black Pride, held around Labor Day); and the recruitment of Black staff and volunteers, the critique still holds. Now, as Atlanta Pride marks its 50th anniversary, the nation’s heightened acknowledgment of social and institutional racism will no doubt train sharper scrutiny on Pride 2020 and the organization itself.

When Jamie Fergerson, executive director at Atlanta Pride, was asked why this perception endures, she replied without pause, “Because it’s true. The truth is the biggest thing that drives the perception.”

Many Black people who attend Pride are thrilled by the event’s magnitude, particularly when they are younger or newly arriving at self-acceptance. They eventually may notice that their musical tastes are rarely reflected on the Piedmont Park stages or that events are rarely held in the neighborhoods they call home, particularly those south of I-20 or west of Northside Drive. As years pass, they question why they have seen almost no Black leadership. As graphic designer Maurice Cook noted, “Every year at Atlanta Pride, even though I went there with my friends, I felt like we were an afterthought. The language, set-up, and venues were specific to one culture, not mine at all. I didn’t look forward to Pride. I looked forward to Black Pride.”

Some Black Atlantans have joined in to help make Pride more relevant to their communities. Reverend Duncan Teague, pastor at Abundant LUUv Ministry and a former Atlanta Pride grand marshal, said, “My deliberate participation in Pride was to bring my voice, my face, my body, and the work I had done in the Black queer community to Pride.”

Conversely, others have reserved their involvement for spaces that are more Black-affirming. Imani Evans-Baskin, a professional counselor who owns Empowered Squared Inc., said, “I attended my first Pride in 1997, and I was amazed by the Dyke March. But as I found my footsteps as an activist, I realized how limiting Pride was. What was missing was me. By my early 40s, I stopped going unless invited by a friend. I stopped going to Target looking for a Nordstrom’s dress.”

As the largest LGBTQ+ gathering in the Southeast, produced by Georgia’s longest-running LGBTQ+ organization, Atlanta Pride still reflects its traditional white base even as the face of the crowd has grown browner. Patterns of exclusion by race and gender reflect systemic issues within the community at large. The organization started in an era when LGBTQ+ communities were even more segregated than they are today. In 1970, Black gays did not have their own clubs in Atlanta, although they were welcomed at several straight Black neighborhood bars. White-owned hotspots like Sweet Gum Head and Backstreet imposed discriminatory door policies. Lorraine Fontana, who was an active member of the Atlanta Lesbian Feminist Alliance, recalled of Pride’s early days, “There were very few Black people there—a small handful of Black sisters at ALFA. We were still immersed in a racist society, not that we aren’t now.”

E.R. Anderson, executive director of Charis Circle (the nonprofit program arm of Charis Books), is a native Atlantan who has attended every Pride since his first event in 1997. Anderson points out that inequity was built into the ecosystem. “Historically, the people who have been able to give that much of their time and energy and money without being paid, they are overwhelmingly white and male or wealthier lesbian.”

There is no doubt that Atlanta Pride has evolved since its beginning. Successive waves of Black LGBTQ+ community building, health services, art, and social recreation have come forth. AP has made serious efforts at engaging Black and brown people, women, trans, and gender-queer individuals. “We have our first Black board chairperson, Wil Bryant,” Fergerson noted. “We’ve made changes to the board as far as representation. We’ve been highlighting mostly Black and young people in our programming.” From 2015 to 2019, Pride increased the percentage of its budget donated to community grants from 3 percent to 7 percent and prioritized Black, brown, trans, and youth-led recipients. In recent years, honorary parade marshals have included the late transgender activist Cheryl Courtney Evans and members of Raksha (supporting South Asians in Georgia), Solutions Not Punishment Collaborative (supporting Black trans Atlantans), and Southerners on New Ground (supporting many LGBTQ+ communities). In fact, the percentage of BIPOC attending Pride has doubled since 2015.

Taylor Alxndr, co-founder and executive director of Southern Fried Queer Pride, a nonprofit supporting queer and trans people of color, formerly served as an event coordinator for Atlanta Pride. “There’s a larger conversation around Pride in general, all over the country, as being white,” Alxndr noted. Nevertheless, they added that, during their employ at Pride, “I saw more intentional diversity and inclusion work happening. There was more programming that was more diverse. I saw more intentional discussions around race and class.”

Given recent efforts, I believe it’s more than reasonable to expect that Atlanta Pride can improve its community engagement. Counselor Evans-Baskin invites Pride’s white team members to acknowledge “their queerness does not negate their whiteness.” She adds, “This must be called out and named in order for fruitful conversations to flow.” Fontana and others suggest more programming for overlooked communities, especially Black and brown trans women.

As the progressive capital of an evolving yet stubbornly conservative state, Atlanta is often at odds with itself. As white people join Black people to protest police brutality, and BLM signs adorn manicured lawns across Midtown, what values will Atlanta Pride model for its constituencies here? The status quo of race- and gender-based elitism—including transphobia—is kept intact by all who resist radical work and shade those who want to hold more than a big party. Members of the Pride community must acknowledge their own racism and sexism and how they operate in queer spaces. Queerness does not absolve LGBTQ+ individuals from this responsibility.

Last year’s event was the last time I saw Congressman John Lewis in person. I cannot remember a Pride parade when he was not present. His last message speaks to us: “Though I may not be here with you, I urge you to answer the highest calling of your heart and stand up for what you truly believe. . . . Now it is your turn to let freedom ring.”

How might we follow Congressman Lewis’s lead not just by parroting his quotes in our email signatures or Instagram posts, but by guiding our actions with the values he modeled? White LGBTQ+ leaders who expressed glowing homages at Lewis’s passing may best honor their avowed hero by doing antiracist, antipoverty work within their own circles. What new bridges might we build by, at long last, speaking truth to the causes of our divisions and distrust?