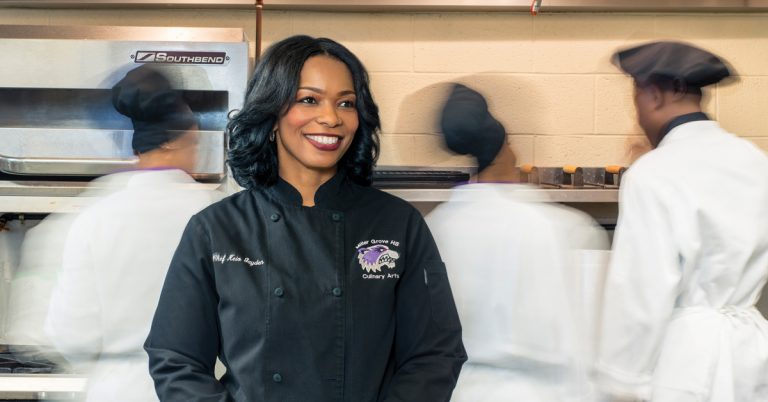 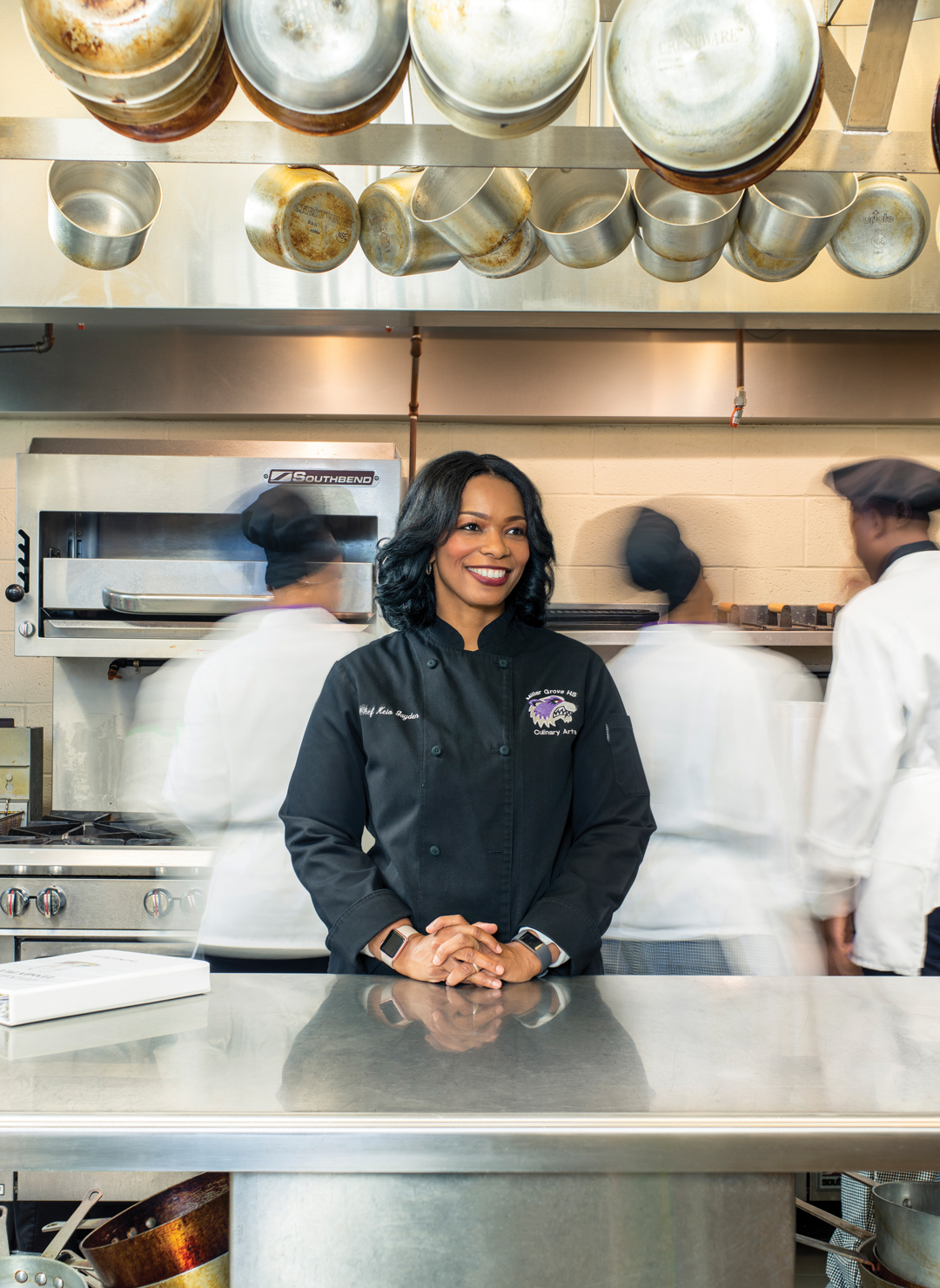 Several aspiring young chefs chat quietly while putting on their uniforms: white coats, white caps, neat purple kerchiefs. They wash their hands and line up for chef Keio Gayden, who inspects their dress and the cleanliness of their fingernails with a steely eye, calling out one student for the choker necklace under her kerchief. It’s a scene common in culinary schools, but it’s also part of the curriculum at Miller Grove High School.

Located in southeast DeKalb County, Miller Grove is big and modern—the largest high school in the district. The population is 96 percent black and 76 percent low-income, and a majority of students receive free or reduced-price lunch. Yet the school sends 69 percent of its graduates to college or vocational school, on par with the state average. And for more than 10 years, one of Miller Grove’s bragging rights has been its culinary program.

For an industry where 16 percent of chefs are black—and for a majority-black city whose chefs don’t accurately reflect the population—Gayden’s program presents an all-too-rare opportunity: It gives young black women and men a competitive edge.

“We’ve taken vocational learning out of so many schools. It’s an injustice in its own right,” says chef and James Beard Award semifinalist Todd Richards, who recently hired a graduate of the program. “Chef Gayden’s class provides great exposure to opportunity, but cooking is also a life skill that can help any of her students in a lot of ways.”

“I can honestly say I came to school because I wanted to go to her class.”

After lineup, the students head to the gleaming instructional kitchen. They’re upperclassmen in the third and final course of Miller Grove’s culinary track, and their lesson today is a surprise. Like on the TV show Chopped, they must use a mystery basket of ingredients to cook a dish without a recipe. Unlike on Chopped, the kitchen must be returned to its spotless condition when they’re done.

It’s early in the school year, only September, and most of the students haven’t cooked without recipes before. They have only about 45 minutes. Gayden dismisses their protests, expressing confidence in their abilities. Each team of two or three students must cook a different pasta dish, so she asks, “What’s the first thing we do when we’re cooking pasta?”

The students scurry to put pots of water on burners. Gayden paces between the neatly spaced stainless steel tables as the teenagers begin to prep the mystery ingredients—a different pasta shape for each team, a variety of cheeses, precooked meats, and fresh herbs—occasionally offering hints to nudge the students in the right direction.

When Gayden took over the program 12 years ago, the scene was far more chaotic. “I was the fifth teacher the kids had seen that year, and it was just November,” she says.

She didn’t have a teaching license, and she took a pay cut from her prior job as a recruiter for Le Cordon Bleu. But the change allowed her to travel less and spend more time with her children. And in short order, she was able to transform the program into a vanguard for high school vocational training. She has secured corporate sponsors, renovated the instructional kitchen, and, most importantly, helped many of her students find careers in the food world.

“I can honestly say I came to school because I wanted to go to her class,” says Dominique Gooden, 21, now a line cook at Yard House, the sports pub in Atlantic Station. He began cooking professionally shortly after graduation thanks to Gayden, who introduced him to Richards. The chef immediately hired him at Richards’s Southern Fried in Krog Street Market.

“He obviously had a passion for cooking,” Richards says, recalling his first impression of Gooden. “He asked great questions, and he didn’t falter or lose confidence in a difficult environment.”

Ivey Pace, another former student, now cooks at Leon’s Full Service after stints at the Optimist and Brezza Cucina. Pace says he had an advantage when he entered culinary school at the Art Institute of Raleigh-Durham, where he earned an associate’s degree. “I already knew most of the basics because of chef Gayden’s class,” he says. “She saw potential in me. She challenged me and held me to a higher standard because of that potential. I wasn’t running with a great crowd when I first got into her class, and I can honestly say she changed my life.”

By the end of the mystery-basket class, the kitchen is again sparkling clean, and five finished pasta dishes are ready to be tasted—including stuffed manicotti made by a student who nearly quit in frustration. After class, Gayden says of the student, “She’s a perfectionist. She just got a little flustered.” A month later, the same student participated in a demo at Taste of Atlanta, cooking alongside professional chefs.

Gayden’s success at Miller Grove has influenced curricula statewide. Her kitchen was one of the first four in Georgia to be accredited by the American Culinary Federation, and 17 more state schools have followed suit. But perhaps a greater accomplishment is the effect she’s had on her students.

“She did so, so much for me,” Gooden says. “She led me to my future. If I had a million dollars, every dime of it would go to her.” 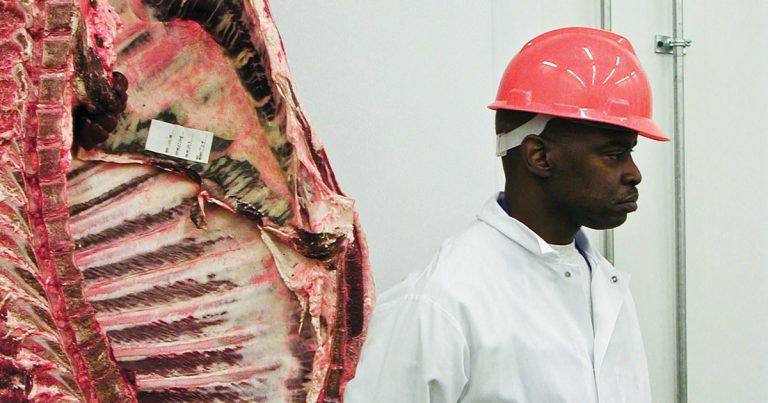 In the fall of 2019, if all goes according to plan, New York City–based chef Marcus Samuelsson will release a cookbook called A Moving Feast: Recipes and Stories of Soul Food’s Journey North. Through the lens of food, it will share accounts of the Great Migration, the massive movement of black people from the rural South to the urban centers of the Northeast and Midwest during the 20th century.

A Moving Feast will feature more than 100 photographs of food, restaurants, chefs, and cooks that characterize the Great Migration. Nearly every image will have been captured by photographer Angie Mosier, a lifelong Atlantan who is preternaturally talented, excessively humble, and unmistakably white.

Her portfolio, though, is a melting pot. Mosier’s diverse portrait subjects, from pitmasters to oyster shuckers to Michelin-starred chefs, have a few commonalities: In front of her lens, they appear confident and unguarded, humble yet elevated. A student of history and member of organizations like the Southern Foodways Alliance and the Atlanta History Center, Mosier has long been drawn to the story of the Great Migration. “This is a project that I really, really wanted,” she says. “It’s a subject I’m passionate about.”

Mosier’s photography filled the pages of three influential Southern cookbooks, each a celebration of the region’s multiculturalism, published in 2018 alone: Turnip Greens & Tortillas by Eddie Hernandez, Secrets of the Southern Table by Virginia Willis, and Soul by Todd Richards. She also contributed to Whiskey in a Teacup by Reese Witherspoon, due out this month. (Yes, that Reese Witherspoon.)

Those who know Mosier—and it seems everyone in the food world does—won’t be surprised to learn that her race was not an issue for Samuelsson or his team. “I don’t think it ever even came up,” says Leslie Stoker, Samuelsson’s project manager. As for why they chose Mosier, Stoker says: “Angie just brings such humanity and grace to every picture she takes.”

At the Atlanta Food & Wine Festival in late spring, John Currence, the James Beard Award–winning chef of City Grocery in Oxford, Mississippi, spoke about his experience working with Mosier on his first cookbook, Pickles, Pigs & Whiskey. “We got into it instinctively, from the very beginning,” Currence said. “Being in proximity to Angie, watching how she worked, it really kicked in this whole new gear of capability.”

The intent behind A Moving Feast is to deepen our understanding of history by further humanizing it. The text will be a collection of essays and recipes from black chefs across the country, sharing family stories and personal experiences. Mosier hopes that her photographic interpretations of them, their food, and the worlds they inhabit will have an outsized effect on readers’ perceptions of the role of black cooking in the country’s culinary history.

She says she’s ready for the responsibility she’s been given and for the challenge of visually capturing such complicated stories. “I’ve already taken photos of Leah Chase, and she is a queen,” Mosier says, referring to the legendary New Orleans chef and civil rights activist. “If I can do her justice, I’ll feel good about the rest of the book.”