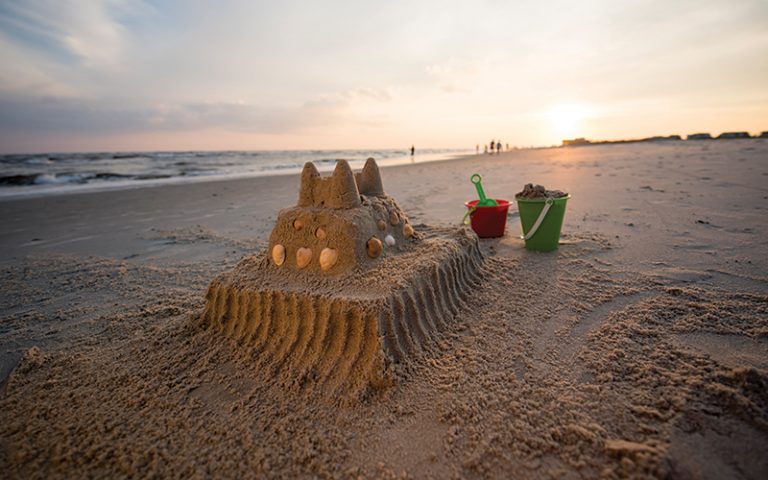 Nestled along the southernmost stretch of North Carolina’s coast, the Brunswick Islands are known for their tranquility. Bypassed for points to their north and south by development, much of these five barrier islands are pristine, covered with rolling dunes and waving shore grasses. But that respite isn’t the only attraction. There’s plenty of golf to play, cuisine to taste, celebrations to join, history to explore, and unique views to enjoy—and it’s all an easy escape from Atlanta. Hop in the car and start the six-hour interstate drive, or catch a daily nonstop 90-minute flight from Hartsfield-Jackson at breakfast, and your toes can be in the sand by lunchtime.

While the Brunswick Islands offer enough adventures to fill several trips, these eight are the ones you won’t find just anywhere.

Standing at the Cape Fear River’s mouth for more than two centuries, Old Baldy is the elder statesman of North Carolina’s seven lighthouses. Today, instead of steering ships, it beckons visitors to automobile-free Bald Head Island. Follow the wooden stairs to its top, an easy climb that turns slightly more difficult if you continue up the ladder to the lantern room. Stop at Smith Island Museum, inside the keeper’s cottage for a souvenir and local ecology lesson.

Oak Island Lighthouse, across the Cape Fear River and within sight of Old Baldy when skies are their Carolina bluest, is the state’s youngest lighthouse. Climbing its 153 feet requires a reservation and some nerve. Instead of stairs, you’ll ascend a series of ship ladders to the top. There you’ll find panoramic views of Caswell Beach. Its gentle slope makes for spectacular shelling. The best time to go is right after the tide changes, when whelks, sand dollars, and countless other varieties are exposed.

What the small fishing port of Calabash lacks in size, it makes up in flavor. Savor it by grabbing a seat at one of the self-proclaimed “Seafood Capital of the World” family-run restaurants. Most were started by local fishermen almost a century ago, when they began serving visitors the shrimp, crab, scallops, and fish they plucked from nearby waters. The unique preparation—a light breading and gentle fry—and generous portions make it popular and widely imitated.

Furry family members are welcome, too

Many of the islands’ accommodations are pet-friendly, and dogs are welcome to splash and run in the water and sand as long as beach-specific regulations are observed. At Caswell Beach, for example, dogs can be off leash in the morning year-round and in the late afternoon and evenings, October through April. Oak Island allows dogs on leash year-round and off leash mid-October to mid-March.

Take part in the state’s official Fourth of July Celebration

What started with a simple toast and a few cannon blasts in 1792 has become a 10-day celebration of our nation’s birthday. The North Carolina 4th of July Festival welcomes about 50,000 people, who see firsthand why Coastal Living named the “Best Beach Town in America for the Fourth of July,” to Southport each summer. Watch the parade, admire classic cars, and take part in plenty of family-friendly fun, beach activities, and a gigantic firework display on the waterfront.

Enjoy some solitude on one of the world’s best beaches

Ponder your thoughts to a soundtrack of rolling waves and salt-air breezes on Sunset Beach, where the lack of development earned it a spot on National Geographic’s list of the “21 Best Beaches in the World.” Explore adjacent Bird Island, where the Kindred Spirit Mailbox has stood for more than 35 years. Write your experiences or thoughts on the notebooks inside, or read entries left by previous visitors.

Play all the golf you like, all in one place

You’re never far from a tee in the Brunswick Islands. Nicknamed “North Carolina’s Golf Coast,” the islands are home to more than 30 golf courses, whose 120 miles of fairways wind through scenic stands of pine and oak and along quiet estuaries. Mild weather drives year-round play, and the variety of courses, designed by some of golf’s biggest legends—Arnold Palmer, Willard Byrd, Fred Couples, and Rees Jones—means you won’t have to play the same one twice.

See the real stars of Nicholas Sparks’ books and movies

If the Brunswick Islands seem familiar at first glance, you can credit North Carolina resident and novelist Nicholas Sparks. His books are filled with plenty of local sights, with more than a dozen starring in their movie versions. All of the filming locations are easy to explore and enjoy, starting with a drink and sunset view at Southport’s Old American Fish Co., where Katie Feldman worked as an Ivan’s Fish Shack waitress in “Safe Haven.”

Plan your one-of-a-kind beach vacation to the Brunswick Islands today and make memories you’ll treasure for years to come. 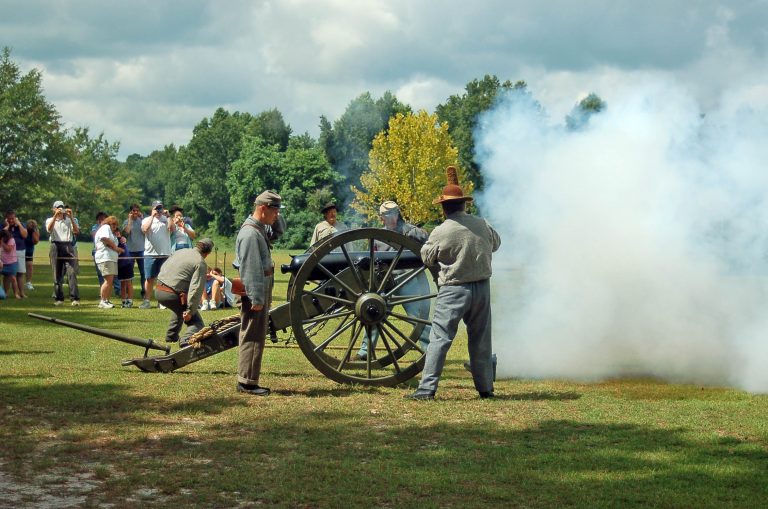 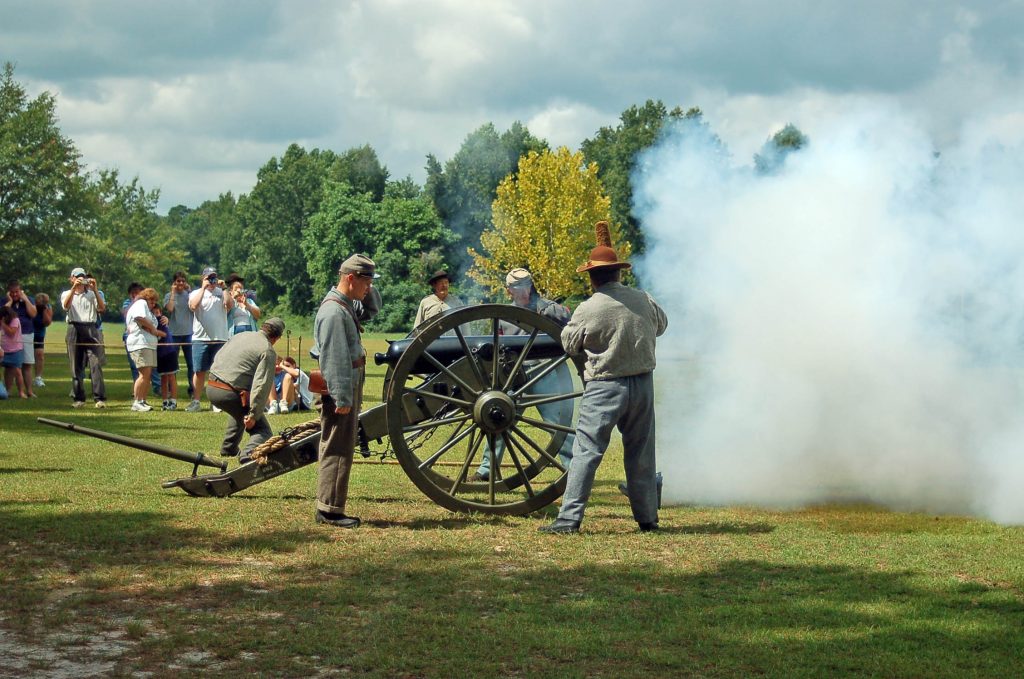 Most days, the forests and fields in this peaceful corner of eastern North Carolina belie the battle that occurred here. Nearly 155 years ago, Confederate General Joseph E. Johnston’s 20,000 troops fought Union General William Tecumseh Sherman’s 60,000 soldiers, who were headed to Goldsboro for supplies. It was the last major engagement of the Civil War—Johnston surrendered his remaining troops about a month later—and the largest fought on North Carolina soil.

Bentonville Battlefield State Historic Site hosts a full-scale re-enactment of the three-day battle every five years, with the next edition taking place the weekend of March 20-22, 2020. About 64,000 people came in 2015 to attend lectures, review artifacts, listen to period music, and purchase Civil War-related items. And legions of re-enactors replayed the Confederates’ failed attempt to stop the northerly march of Sherman’s army, which had left a path of destruction through South Carolina and Georgia. 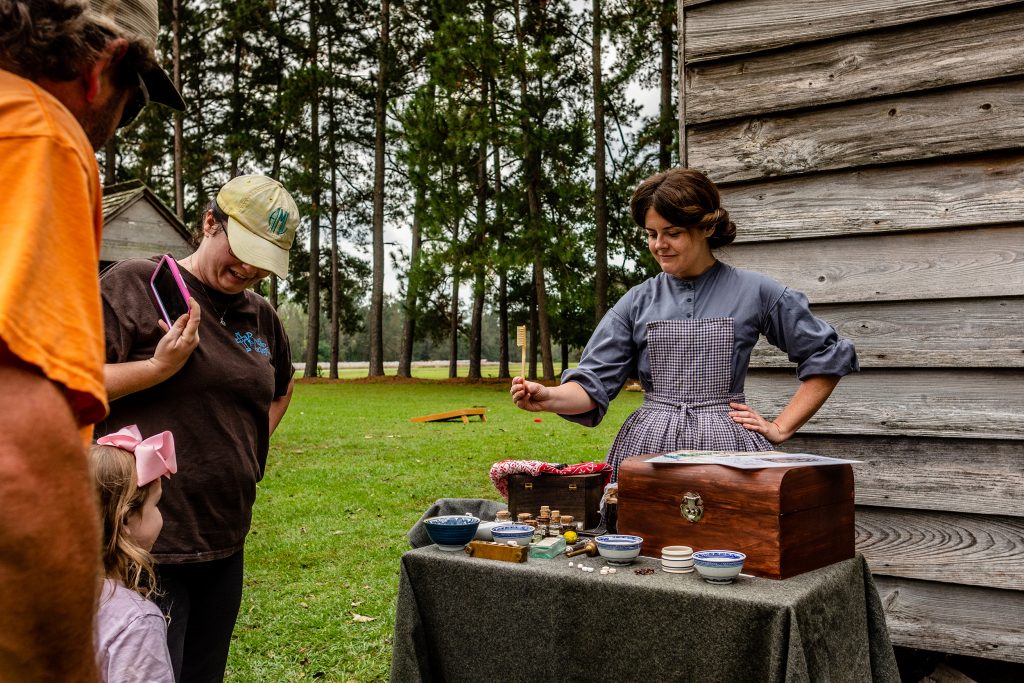 But you don’t have to wait until 2020’s full-scale re-enactment to experience the battlefield, because the history and hospitality in the cities around Bentonville in Johnston County are always on display. Tours, living history events, and smaller battle re-enactments—always held during March’s third weekend—bring it to life nearly every day, and you’ll also find plenty of shopping, unique craft brews, delicious meals, and comfortable places to lay your head.

Johnston County is roughly a six-hour drive from Atlanta, and Amtrak trains stop twice daily in Selma. Delta and Southwest airlines combine for about a dozen daily nonstop flights between Hartsfield-Jackson and Raleigh-Durham international airports. The latter is about 45 minutes up Interstate 40 from Benson, home to a recently built Hampton Inn.

Each of the Hampton’s rooms includes a 50-inch HDTV, minifridge, microwave, Wi-Fi, and use of the fitness center. Take time to enjoy the complimentary hot breakfast, outdoor saline pool and pergola-covered patio, complete with fireplace. Pets are welcome, with a dog park conveniently located next door.

If you want a modern version of the soldiers’ accommodations, make reservations at Raleigh Oaks Campground in Four Oaks. Choose from cottages with furnished kitchens and flat-screen TVs that sleep up to eight people or one of 150 full-service RV sites. Either way, make time to enjoy its nine-hole miniature golf course.

More accommodations are available up I-95 in Smithfield, where you can tour a museum that honors Hollywood star Ava Gardner or relax with a board game, beer, and hand-tossed pizza at Simple Twist Taproom and Bottle Shop. Try its JoCo calzone—grilled chicken, bacon, mozzarella, and a side of ranch dressing. And nearby Selma antique district has more than 100,000 square feet of stores that are steps apart.

Find more treasures from the past at Stanfield’s General Store. It has the hardware, homewares, and creaky floorboards that its name suggests, but its surprises—antiques, North Carolina-made foods, local art, and more—will make you linger. 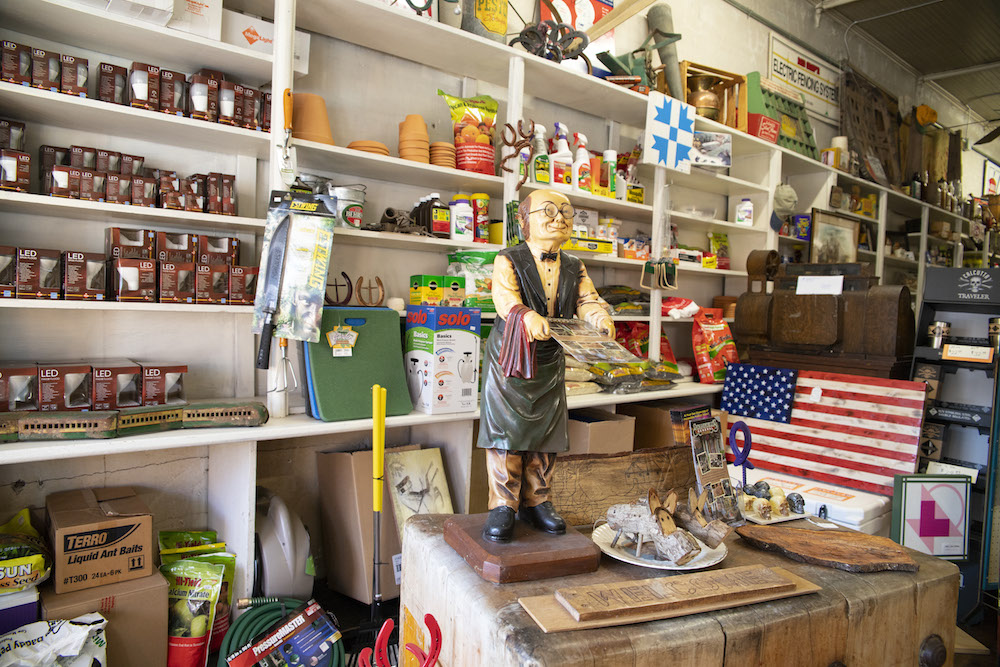 Back in Benson, browse handmade creations, vintage and antique furniture, collectibles, and farm-style décor at Morgan’s on Main. Much of its inventory isn’t listed on its website, making a visit worthwhile. It’s a two-minute walk to Salvaged Heirlooms, which began selling refurbished, vintage, and handmade items as a pop-up shop. Enjoy craft beer, local wines, and quick bites to eat in its Lounge.

The local craft beer scene will be even bigger by the end of the year, when Fainting Goat Brewing Co. opens its expanded brewery and second taproom. While the new capacity will allow limited runs of specialty beers, you’ll be able to still enjoy longtime favorites including Der Hoof Hefeweizen, a light body German wheat, and seasonal offerings such as No Kidding Belgian Wit, a Belgian white.

Enjoy more libations at Broadslab Distillery, whose name comes from southeastern Johnston County’s historical nickname. Learn about the owners, bootlegging, and modern distilling on its one-hour tour, which ends with a sampling of handcrafted products, from Legacy Shine white corn whisky to Carolina Coast Spiced Rum.

If you’d like one more history lesson before your trip ends, there’s more to learn at the historic site’s visitor center, starting with the 10-minute film that sets the Battle of Bentonville’s stage. Afterward, view battlefield artifacts and trace troop movements on a large fiber-optic map, complete with narration and battle sounds. And grab a scavenger hunt list, which makes children’s visits interactive. 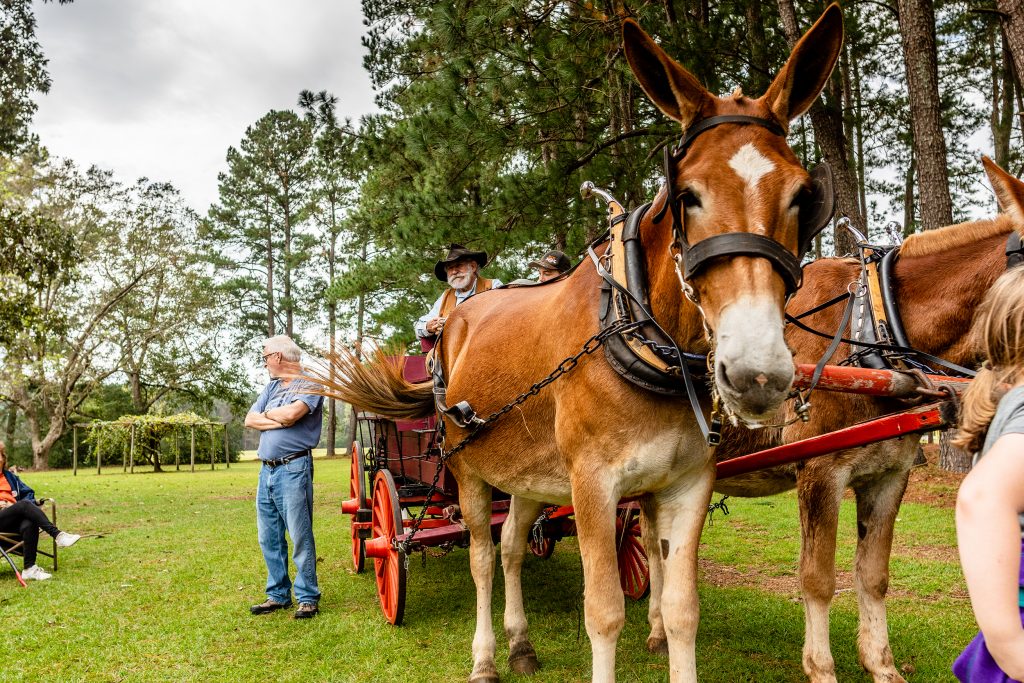 Next door, take a guided tour of Harper House, which predates the Civil War and served as a field hospital for some of the casualties during and after the battle. Then, download the free smartphone app for the 10-mile driving tour through the 6,000-acre battlefield, much of which has remained unchanged since March 1865.

Get out of the car and explore the battlefield’s nearly four miles of trails, which made it one of USA Today’s top 10 places to hike through Civil War history. Start with the nearly one-mile trail that begins across Mill Creek Church Road from the visitor center, following it to reconstructed field fortifications, a replica cannon, and the remains of Union trenches.

But before you march across the battlefield, fill your stomach at family-owned Cornerstone Café & Coffee in Benson. Start with a coffee, espresso, or frappé made from rich and sweet Guatemalan beans. You can order its breakfast menu favorite—fluffy Belgian waffles topped with everything from fruit to candy—all day. 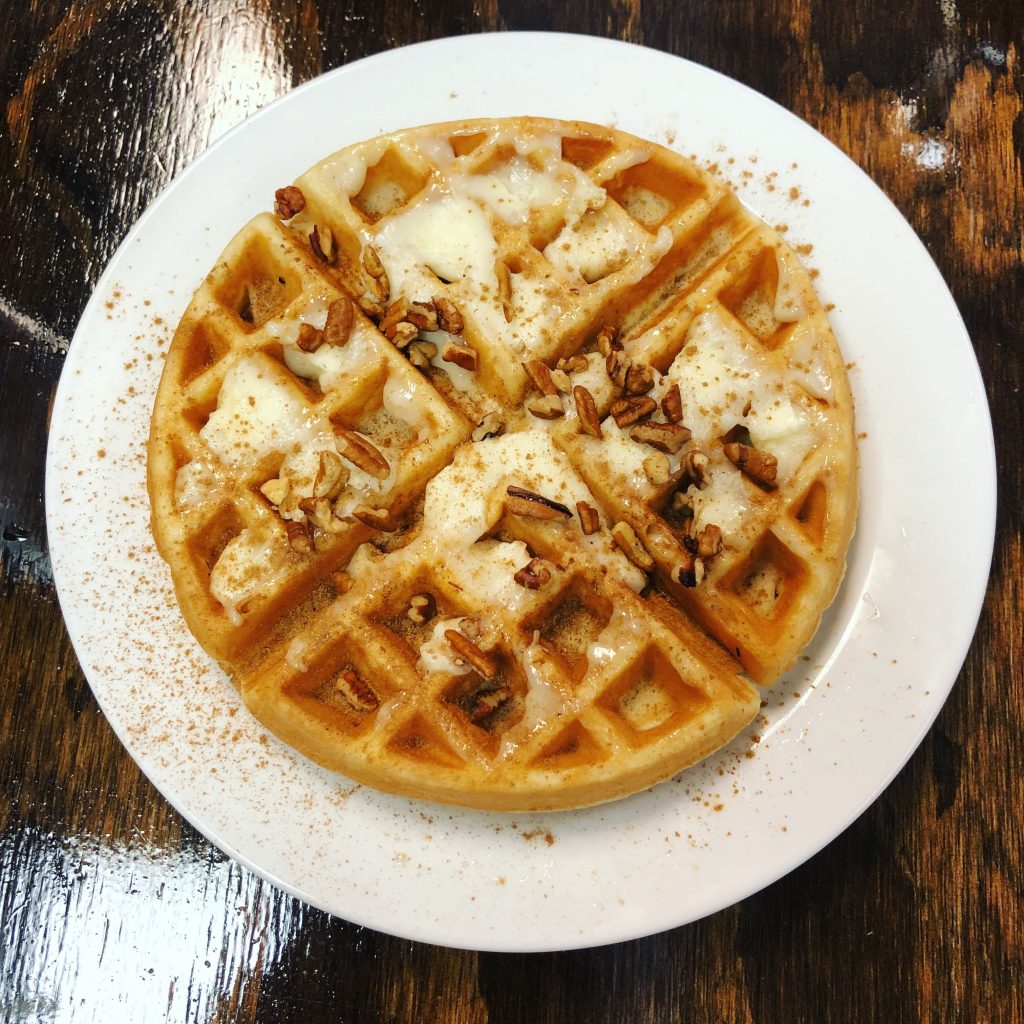