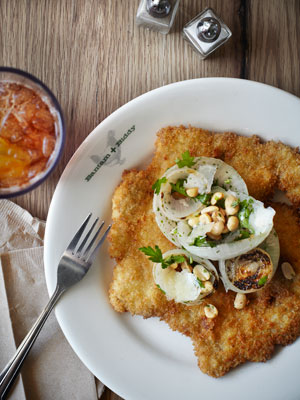 It took a few months for Shaun Doty’s sunny rotisserie chicken joint, which opened last fall in Ansley Mall, to find its true personality. At first customers ordered at the counter, but Doty soon realized that the laid-back and immediately loyal clientele would be happier with table service. And random dishes like pork schnitzel scattered with onions, parsley, and peanuts (a specialty at Doty’s defunct Inman Park bistro, Shaun’s) initially outshone the bird itself, which was inconsistently seasoned and frequently dry. That’s changed, happily. Now Doty and Lance Gummere—who was previously chef at the Shed at Glenwood and is, incidentally, Doty’s brother-in-law—run an operation that feels like a next-generation meat-and-two. The menu sprawls with sandwiches, salads, and entrees such as meatloaf with smoked tomato gravy or sauteed salmon with dill-mustard sauce. But I usually opt for the clucker, now crisp-skinned and precisely salted, with a dollop of spicy piri piri and sides that lean toward the Southern lexicon, like rice and beans or braised cabbage (an occasional special). For breakfast, go for the fried chicken and waffles: Its keenly engineered balance of sweet and savory served as a prototype dish for the menu at Doty and Gummere’s follow-up restaurant, Chick-a-Biddy, which launched in Atlantic Station in July and features wood-grilled and fried chicken.