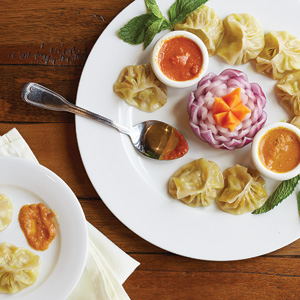 A curious phenomenon: Although mainstream, independent restaurants are popping up now as frequently as in the pre-recession aughts, hardly any new noteworthy, global-minded mom-and-pops are opening along Buford Highway. Or, for that matter, in northern suburbs with pockets of dense Asian populations, like Duluth. I can only hope this trend (which has no simple explanation; high rents and scarce bank loans surely figure) doesn’t persist. The flux of intriguing international fare lends enormous vitality to our dining landscape. Himalayan Spice, in the Williamsburg Village Shopping Center at the intersection of Clairmont and Briarcliff roads, happily came along late last year. It specializes in an underrepresented cuisine in the metro area: Nepalese. Reflecting Nepal’s geography, the cooking straddles Indian and Chinese traditions, with mild spices and a fragrant abundance of onions, garlic, and ginger. Start with badam and bhatmas sadeko, a salady snack of crunchy, gently seasoned peanuts and soybeans; variations made with lamb or chicken benefit from the meaty heft. And be sure to order momos, a Nepalese staple of gauzy dumplings stuffed with chicken or vegetables and served with a tomato-ginger dipping sauce. Stick to the Nepalese novelties and ignore the generic Indian dishes.