Bocce
Two Urban Licks
There are two outdoor bocce courts at this Poncey-Highland restaurant—both facing the Atlanta BeltLine, with easy access to a fully stocked bar inside. Courts are gravel (our preferred surface; Astroturf is a deal-breaker). There’s league play on Sundays, but otherwise you can start a game during normal restaurant hours. Bonus: The patio offers a scenic skyline view, plus primo dog- and people-watching.
820 Ralph McGill Boulevard, twourbanlicks.com

Darts
Twain’s
The best spot to nail a bullseye—and not somebody’s right eye—is at this Decatur den, which sports four boards in a roomy nook just behind the second bar in the back. There’s no charge to play, with the assumption that you’ll be ordering a pitcher or two—or three—of beer (American brews only). Aim’s off? Billiards and shuffleboard are just around the corner. 211 East Trinity Place, Decatur, twains.net

Billiards
The Independent
With ample room to angle around the bed and set up your next pocket shot, this Midtown bar hosts
pool tournaments on Thursdays, with drink specials ($2 High Life!) sprinkled throughout the week. Don’t know a bridge from a break? Sidle up to the stack of board games. 931 Monroe Drive, theindependentatlanta.com

Video Games
Battle and Brew
Gamers can order a pint and rent a bigscreen TV to play first-person shooters, platformers, and sports titles on consoles both old (the original Nintendo) and new (Wii U, Play­Station 4, and Xbox One). Don’t worry about spills; they keep the top-notch tech out of easy reach. Think you know everything about Star Wars? Bring your squad on Wednesday for the toughest nerd trivia in metro Atlanta. 5920 Roswell Road, Sandy Springs, battleandbrew.com 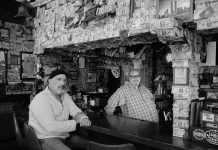