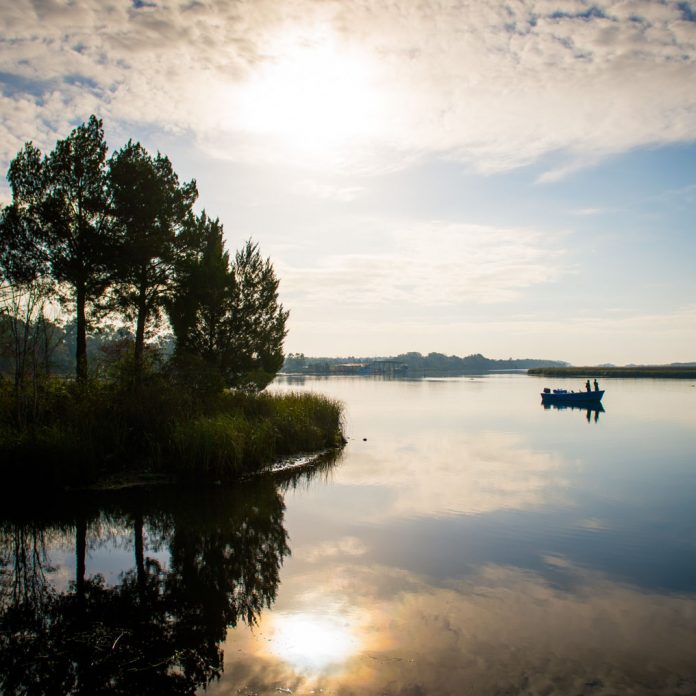 On the newsstands in Wakulla County, Florida, home of the Sopchoppy Worm Gruntin’ Festival*, you’ll find Rifle & Rod rather than Garden & Gun. The glossy’s curvy ampersand is just as elegant as G&G’s, but R&R’s ads are for trucks and tractors rather than rarefied bourbons. In the predawn gloom, I browse a year-old copy at the Shell Island bait shop, where my son and I have come to meet the day’s fishing guide, Garry Schnake.

Captain Garry is not hard to recognize. From his bushy white beard to his rubber-soled shoes, the Navy vet is every inch the old salt. Give him a yellow slicker and a pipe, and he could be hawking frozen fish sticks. We hop aboard his skiff, the Maggie Lou, and head up the Wakulla River, past where it runs into the St. Marks and out to where the Gulf of Mexico laces its brackish fingers into dozens of freshwater tributaries. As we race V’s of migrating shorebirds down misty channels, Schnake gives us instructions: five-gallon bucket of saltwater for shrimp, one-gallon tub for sharing the bait. Blue bucket? Ladies room.

Stoic pelicans gaze at us from atop green and blue buoys, and a crabbing boat passes on its way home. Schnake says the crew most likely caught the black-tipped stone crabs we ate last night in St. Marks. As we anchor in shallow waters called flats, hovering above underwater grass teeming with marine life, we’re quickly pulling in saltwater trout, ladyfish, sea bass, and redfish as fast as we can cast. The whole trip is worth it when my son reels in a nearly two-foot-long redfish.

Shell Island is the quintessential Florida fish camp. The state that is the Census Bureau–certified fishing capital of the U.S. (tops in number of recreational fishing days, number of anglers, dollars spent, etc.) was once home to hundreds of rustic compounds where fishers slept near a dock to get a jump on the day. As waterfront property became more expensive, many of these small businesses vanished, and now most of the survivors are along lakes and rivers, says Terry Tomalin, outdoors/fitness editor for the Tampa Bay Times.

Asked what distinguishes the Sunshine State’s camps from ones in Maine or Michigan, Tomalin says, “You know you’re in a Florida fish camp if they have a ten-pound bass stuffed up on the wall and at least one gator head. You’re batting a thousand if they’ve got something from a rattlesnake. That’s the blessed trinity of Florida fish camps: the stuffed bass, a gator head, and rattlesnake parts.” Shell Island, family-owned for more than fifty years, has only a mounted 8.5-pound trout, but Tomalin concedes the outpost is still a classic.

Our cottage—a prefab “park model” with a cozy little front porch and motel-like furnishings, down to the Gideons Bible ($73/night for two people)—doesn’t have a kitchen, and it’s too cold to grill. So we grab a few pounds of our fillets and head over to the Riverside Cafe. During October’s annual Stone Crab Festival (we sampled some claws here the night before) or on hot summer nights, patrons crowd umbrella tables around the outdoor stage, but this late fall evening we have the kitsch-filled main room to ourselves. We hand over a plastic bag of fish and ask if the cook can prepare each type differently. When we get a blank look, we say, “Fry it all.” Turns out that when fish is this fresh, pretty much every variety tastes sweet and tender inside a hot battered crust.

Downtown St. Marks is just a smattering of businesses where Highway 363 dead-ends into the river or, more accurately, the tiki garden outside Riverside Cafe. There’s a cantina, a bed-and-breakfast, a park, a historic fort, and Bo Lynn’s Grocery—a sort of Cracker Barrel antetype that’s been serving the community since the 1930s. Nearby is also the St. Marks National Wildlife Refuge and Lighthouse. Visitors can’t climb up the circa 1832 lighthouse, but nature is on view at the surrounding park, one of the nation’s oldest wildlife refuges, which dates back to 1931. On our way out, we come across two majestic bald eagles, just yards away. My son whips out the camera. Best catch of the trip.

*Sopchoppy is a town near St. Marks. Worm grunting is a way to catch bait. You drive a wooden stake into the ground and rub a flat metal rod across the top. The resulting vibrations drive worms to the surface because they mistake them for burrowing predators. The festival takes place on second Saturdays in April. 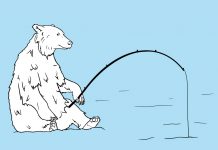 Where to reel in trophy trout in North Georgia streams