Home Uncategorized How it feels to patrol the toughest neighborhoods 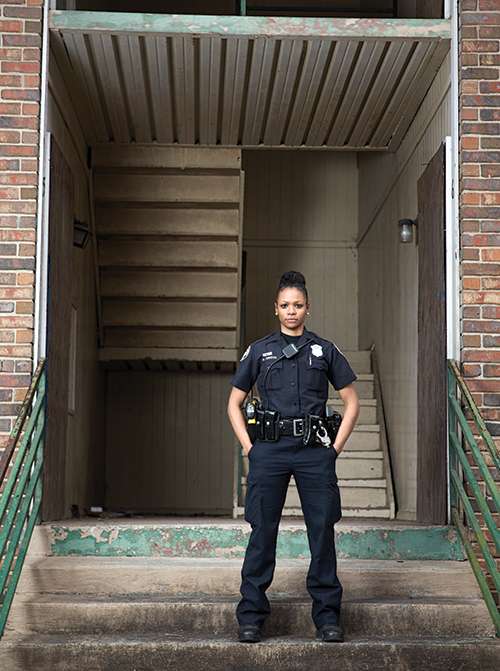 A family dispute is flaring in a cramped kitchen in southeast Atlanta when Ashley Gibson arrives. Gibson is five foot three, with pearl earrings and pink-painted fingernails, her hair swept into a high bun that recalls her cheerleading years. Despite her slight stature, Gibson doesn’t flinch. The Gwinnett County native graduated the police academy two years ago and requested to work Atlanta Police Department’s Zone 3, a rectangular swath of generally tough neighborhoods stretching from Downtown to near the airport. Over the course of a dreary afternoon, Gibson, nicknamed “Smiley” for her sunny disposition, investigates an attempted burglary, races to assist officers at a high school brawl, sternly advises a pedestrian to pull up his pants, and tells one bozo on a four-wheeler to take it home. In the kitchen, Gibson settles everybody down and persuades one unruly teen to dole out apologies and hugs. The boy’s mother praises Gibson: “Girl, you good!”

I wanted to come here. I figured, I’m a big girl, I might as well start with a big department, where you can get good experience.

I don’t come out here judging people. Everyone has a story. You never know somebody’s struggle.

Couple weeks ago, I arrested a twelve-year-old for two felonies. She brought 4.7 grams of weed to school and tried to sell it. I was sad for her. She’s so young. They don’t realize your record follows you.

From what I hear, they used to call Zone 3 “the war zone.” It was a little more intense than it is now. Some zones are prettier than others. This isn’t the pretty Downtown area of Atlanta. Crime happens.

There are scenarios where you might encounter a subject that has a gun or knife on them. I wouldn’t say it’s an everyday occurrence. I’ve never had to pull my gun out. In some situations, if you can talk to people, that can get you a long way, that verbal judo.

Sometimes, being a female officer, people automatically underestimate you. That’s just a fact of life. To be honest, the females are the ones that give you a harder time than the males. I can’t say specifically why. People say, “You’re a police officer?” People are so quick to say that, but they can’t explain it, you know? What’s a female cop supposed to look like?

My dad wishes I would have gone into criminology instead of policing, but he still supports it. My mom tries to not let me know she worries. You have your own family, but here, in the work environment, in the zone, especially on [evening] watch, those officers really do become your brothers and your sisters. I truly believe that.

I ultimately want to be a homicide detective. I’ve always had that goal, ever since I was little. I know it’s kind of weird, especially for a girl. Homicide’s different, but I still view it as helping people in need.