Home Uncategorized A farmer fled violence in Myanmar to start over in Atlanta. After...

By mid-June, most of the greens at Bamboo Creek Farm had gone to seed. Left untended, heads of dinosaur kale and heirloom lettuce sent up scraggly, flower-crowned stalks toward the sky, rendering their own leaves too bitter to sell or eat. Near the silty creek that snakes around the southern edge of the farm, a handful of fat, dusky Cherokee Purple tomatoes sagged on the vine or dropped from their bamboo stakes to rot on the ground.

No respectable farmer would neglect their own healthy, lush crops in the middle of market season. Especially not one who’s been working with the land since he was an adolescent, as Steven Than Ceu has. But after a series of storms in April, when Snapfinger Creek rose up, washed away the farm’s topsoil, and left a loamy layer of sand in its place, the crops were possibly contaminated and definitely unsellable. The flood also took with it the primary source of household income for Ceu and two of the other four families who farm these 15 acres in Stone Mountain.

Ceu had farmed rice and corn in the Chin state of Myanmar (formerly Burma) from the time he was 14, when the country’s government shut down his school. As violence escalated, Ceu fled in 2010 at the age of 36, seeking refuge with his wife and four children in the United States. The family was resettled in Atlanta, where Ceu initially found work at a poultry-processing facility—he calls it “the chicken factory.” The following year, he discovered Global Growers.

The organization, founded in 2010 to help create economic opportunities for refugee farmers, had begun its outreach by meeting with groups active in the refugee community. One of those groups was the Georgia Chin Baptist Church, where Ceu is both a member and a leader. Global Growers had just leased the plot of land in Stone Mountain that would become Bamboo Creek Farm, and the organization offered Ceu a 10th of an acre to farm at nominal cost. Ceu began spending his days laying out his beds and setting up irrigation, continuing to work at the chicken factory by night.

The following year, 2012, Ceu harvested his first crops at Bamboo Creek: long beans, mustard greens, and corn. He farmed alongside fellow Chin refugees, who shared not only the land but also infrastructure like irrigation, cold storage, and a washing station—resources that would have been too costly for each of them to procure on their own. Ceu made $560 in sales that first year. He was working himself to the bone, but he was happy. “My favorite English word is farm,” he says.

Ceu’s plot grew in size each of the following years, as did his earnings—mostly thanks to Global Growers’ CSA program, which brings its produce directly to subscribers. In 2014, Ceu quit the chicken factory and became Global Growers’ first farmer to transition to working the land full-time. He expanded his crops to include staples like tomatoes and squash, upmarket produce like specialty greens, and a few culturally specific crops like roselle leaves, pumpkin leaves, and bitter greens. With time, Ceu became intimately familiar with the land, the climate, and the terrain, all of which differed drastically from what he’d known back home. In Myanmar, Ceu had no irrigation and often had to endure cycles of long droughts in which crops would wither. On-demand water felt like a revelation to him; he joked that it made the hard labor of farming “easy.”

Now, walking around the dusty acre he once farmed daily, Ceu looks down at the dirt, yanks a handful of ripe turnips out of the sandy soil, and tosses them to the ground. “No harvest,” he says with a sad smile. Green onions, mizuna, kohlrabi, broccoli, cauliflower, radicchio—the fruits of nearly a decade of labor continue to flourish but can’t be sold and shouldn’t be eaten. Ceu doesn’t like coming here anymore; it’s too gut-wrenching for him to see. “I was here every day, seven to nine,” he says. “And now, it’s all gone.”

The flooding of Snapfinger Creek compromised not only Bamboo Creek’s delicate soil structure but the crops themselves. The FDA stipulates that edible crops that come into contact with floodwater cannot be sold, since they could have been contaminated by heavy metals, pesticides, or pathogens like salmonella. Before replanting, farmers have to test their soil regularly. Such testing at Bamboo Creek would be prohibitively expensive. The financial risk, according to Global Growers cofounder and executive director Robin Chanin, is too great. There are other plots in the Global Growers network, but they’re small by comparison, closer in size to community gardens than to commercial farms.

Since the flood, Ceu has grown a few crops in his own small backyard in Tucker, but it’s not nearly large enough to make up for the land he lost. He keeps his seeds with the hope that he can sow them next year. That hope isn’t unfounded.

“We had been planning for the last several years to invest in a larger commercial farm site that would build on the model that we’ve created at Bamboo Creek Farm,” Chanin says. “We’re working now to see how we can double down and accelerate those plans. It’s not quite a silver lining, but it is an opportunity.”

In the wake of the April flood, Global Growers raised money to help its farmers make ends meet until they found other work. Now, the organization is actively looking for land and seeking more money from the community to make that larger-scale farm happen.

Until then, Ceu—who, earlier this year, became an American citizen—supports his family by working night shifts at Hormel’s meat-canning facility in Tucker. He chose the graveyard shift to keep his days free for the tilling, sowing, and harvesting he hopes are in his future. “Maybe next year,” he says, “we’ll find another farm.” 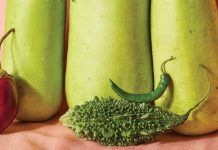 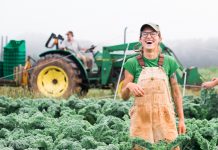 Female farmers are rare in Georgia. Ashley Rodgers wants to change that.