Home News & Opinion From the Magazine A visit to Che Butter Jonez, one of Southwest Atlanta’s happiest little...

Detric Fox-Quinlan and Malik Rhasaan were talking excitedly about the regulars at Che Butter Jonez, the restaurant they opened a little over a year ago just off I-85 on Cleveland Avenue. “What I love about us is that our customer base is so diverse,” Fox-Quinlan was saying. “We get old women—we have two older Jewish ladies—”

“From New York. They come in, they get their usual fix, get their water, take their pills before they eat. They love Bustelo—that’s the only coffee they want.”

“Everybody comes here. We don’t get any of that tension,” Rhasaan said, referring to the gang violence that’s drawn Cleveland some notoriety. “We get the little Jewish ladies and the alleged gangbangers here at the same time. Food is the common denominator.”

“If they’re out there loud, as soon as they come in, immediately, they’re like—oh.”

“Yeah, ’cause it look like a wellness spa in here.”

There are few restaurants in Atlanta like Che Butter Jonez, where Rhasaan interprets some of the dishes he grew up eating in Queens—a flagship lamb burger, chicken pitas and bodega-style breakfast sandwiches, a pastrami-topped patty melt called the Patti LaBelle—while Fox-Quinlan works the counter. The restaurant is located in the plaza of a Chevron station in what used to be a MetroPCS store. “There was, like, laminate on top of carpet,” said Fox-Quinlan, who is better known in the CBJ universe—the pair are prolific Instagrammers—as Bae Butter Jonez. It now looks a lot nicer, with white walls and blonde wood furniture, and pictures on the walls of high-profile fans including Samuel L. Jackson (who heard about it while in town filming a movie) and Dominique Wilkins (who DM’d to ask if he could get his 60th birthday catered). “It has the hood vibe and the hipster vibe,” Rhasaan said. “Everybody gets this thing.”

More than a decade ago, in New York, Rhasaan cofounded the organization Occupy the Hood, which aimed to bring the needs of communities of color into the conversation around Occupy Wall Street; in 2011, when Time magazine named “The Protester” its Person of the Year, Rhasaan and another Occupy the Hood founder were photographed in an accompanying photo essay. Between then and now, Rhasaan and Fox-Quinlan met and married; Fox-Quinlan worked a corporate job in Atlanta before becoming burned out. The day after she quit, the two drove down to Florida to buy a food truck.

The Cleveland Avenue space was going to be a commissary kitchen for the truck before they decided to turn it into a full-fledged cafe. Their success has brought new opportunities: Recently, the couple purchased a space in Osceola, Arkansas, of all places, where they want to launch a restaurant (“It’s just the cutest little downtown,” Fox-Quinlan said), and they’ve signed on to operate a restaurant and bar out of Origin Hotel Atlanta, a boutique hotel set to go into an old office building on Pryor Street.

That’ll be more upscale; the vibe on Cleveland should remain the same. “We are the neighborhood Cheers. We know first names and everything,” Fox-Quinlan said. And, truly, she and her husband have a kind of Sam-and-Diane relationship, bickering happily in front of, and sometimes with, whoever happens to be around. “Even back then, we were arguing!” Rhasaan said, talking about the food-truck days. “The customers would be taking sides. Getting along? No way. We don’t even get along at home.” 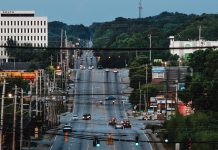