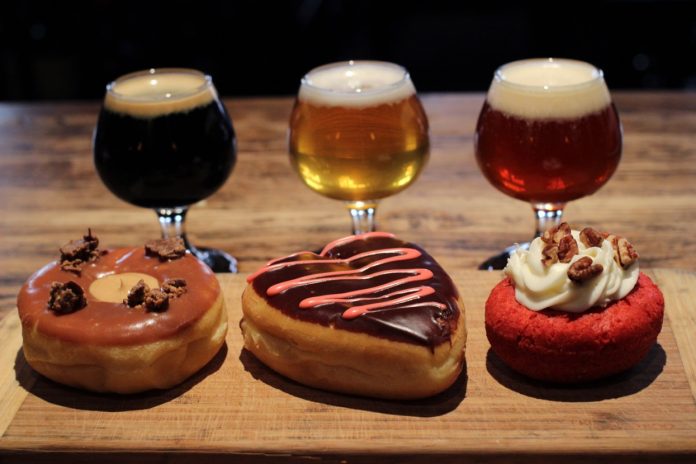 Good news for all the lovebirds, love-weary, and those in search of affection—Cypress Street Pint & Plate has got all the Valentine’s Day bases covered next week. The Midtown bar and restaurant is hosting two events where the only requirement is that you like beer.

On Tuesday, February 11, Beer Geek Tuesday starts off with a Valentine’s Day Blackout Party featuring Sublime Doughnut pairings. If that sounds too wrong to be right, consider the selections—the Red Velvet Cake doughnut paired with Belgian strong dark ale Delirium Noël; a strawberry-filled chocolate doughnut paired with Allagash Saison; and Reese’s peanut butter cup doughnut paired with the velvety stout Pistols at Dawn, from Lonerider Brewing Company. Then on Friday, February 14, the bar will host a V-Day Singles party with live DJ, featuring a craft beer ice cream milkshake and $2 SweetWater IPAs. If you’re looking for love, you just might find it.

Rob “BrewRu” Merrick is the assistant manager and resident beer aficionado, who has overseen the Cypress Street bar program for the past two years. Merrick curates a bound binder of mostly craft options, but I usually stick to page one where rotating drafts are listed. Three Taverns had a lucky three taps on not long ago; last weekend I enjoyed He’brew’s American strong ale, Reunion. Merrick’s list is always a mix of local gems and well-known delights—good luck getting your hands on that Bell’s Hopslam before it kicks.

Beer Geek Tuesday is a treasure for Merrick, who takes this time to offer new beers to people interested in beers that might symbolize a new season, celebrate the launch of a local brewery, or could be a rare find. Below, Merrick talks more about this weekly tradition that dates back to 2010.

What goes on at a regular Beer Geek Tuesday? Each week it kicks off at 7 p.m. and you can usually find me introducing new beers to people. Sometimes Ryan Crocker (our GM) and I will just come up with a crazy idea to celebrate beer. Ryan recently had the idea to do an SNL Beer Geek Tuesday because the Southern Tier brewery came out with a beer called “Goat Boy.” All of our staff will come dressed as their favorite SNL characters.

Do people really call you “BrewRu”? Please tell me you have a pose that goes with this name. Yes, I am really called the BrewRu. Its origin came from the thought that I could host my own show related to fine beverages and good food. The name sort of stuck. As for a pose, I think it would be holding a beer stein in the air like Conan the Barbarian holds his sword.

How did Beer Geek Tuesday come to be? It was the brain child of Cypress co-owner Bill Streck and my predecessor, Wes Anderson, as a casual exploration of all things beer: food and beer pairings, rare casks, tap takeovers, and specialty events.

This coming Tuesday features two New Belgium beers. What do you love about these styles? The Snap Shot is a sour wheat and the Spring Blonde is a Belgian-inspired blonde ale with big citric notes. These styles scream bring on the spring! Everyone is ready to put the top down and wear flip flops.

You guys are doing a mash-up of BGT and the Valentine’s Day Blackout party. What happens when you turn off the lights Tuesday night? Our annual Valentine’s Day Blackout party was born when the power went out one year and we had to wing it. The guests loved it, so we’ve been doing it every year since. Guests will see the glow of hundreds of red candles.