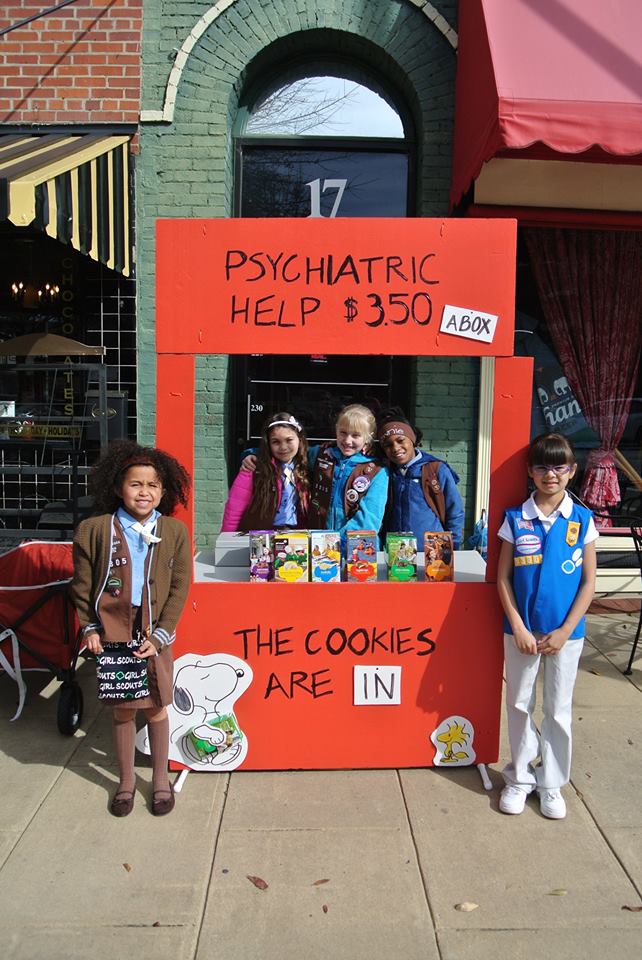 From cool Thin Mints to buttery Trefoils, Girl Scout cookies are a seasonal obsession, and every year, thousands of girls arrange rows of brightly-colored cookie boxes outside of grocery stores and local businesses. But underneath the sweet façade of smiling girls and delicious treats lies a fierce spirit of competition as girls command their own companies. Each sets her own goal, and those who sell the most are recognized or, in some cases, adorned. At one thousand boxes, she is officially a “top seller.”

I recently spoke to three veteran cookie-mongers to see what it takes to sell. Here’s what they had to say.

Each girl must order her own inventory, says Heyman. After, she takes orders from regulars, adds boxes for booth days, and, on occasion, gives in to buying cookies for herself. Heyman says that business cards are critical for creating a regular customer base. She’ll then spend ten hours a day at a booth handing out those cards and pulling people in to buy cookies. As for interacting with people, Heyman is careful not to be over-the-top aggressive or energetic. “The cookies sell themselves,” she says.

Poole says success takes patience and determination. She remembers the year she aimed to sell 2,000 boxes, and the day when a heavy thunderstorm blotted out the sky. Given that she had reserved a spot for her booth in advance, bracing the weather was the obvious choice to make.

“I went out with my girls, and we were all wearing raincoats and boots underneath big pink tents outside of a Walmart. We stayed all day and ended up selling 200 boxes despite the weather,” she says.

Devine has been selling cookies for twelve years and estimates that she has sold more than 16,000 boxes throughout her entire career. In a single month, she once sold 3,000 boxes. Her success has led to ambassadorial trips to different countries and funds for her Gold Award service project.

Devine says that up-selling is an important part of her record. “One time I was selling outside of Walmart and a man pulled up in a really nice car talking business on a phone,” she recounted. “We made eye contact for a second and he asked how much the cookies cost. I could have told him $3.50 a box, but given the attire he was wearing and the businessman look, I told him it was $42 for a case. He bought a case.”

As for attracting those walking by, Devine says it’s important to arrange boxes neatly so that customers can see all of the varieties. Smiling is imperative, she says, regardless of whether or not it’s cold, windy, or the drive to sell just isn’t there that day.

Besides, you never know when the hard work will pay off. Devine remembers standing outside of a coffee shop at 6:30 a.m. in the sixth grade. After a woman walked outside with coffee, she bought a box of cookies and talked with Devine, then just twelve years old and wearing a cookie costume. Apparently impressed, the woman handed Devine her business card.

“Call me in ten years when you graduate college,” she said. “I have a job for you.”

Six Atlanta cookie bakers who will help you win the holidays