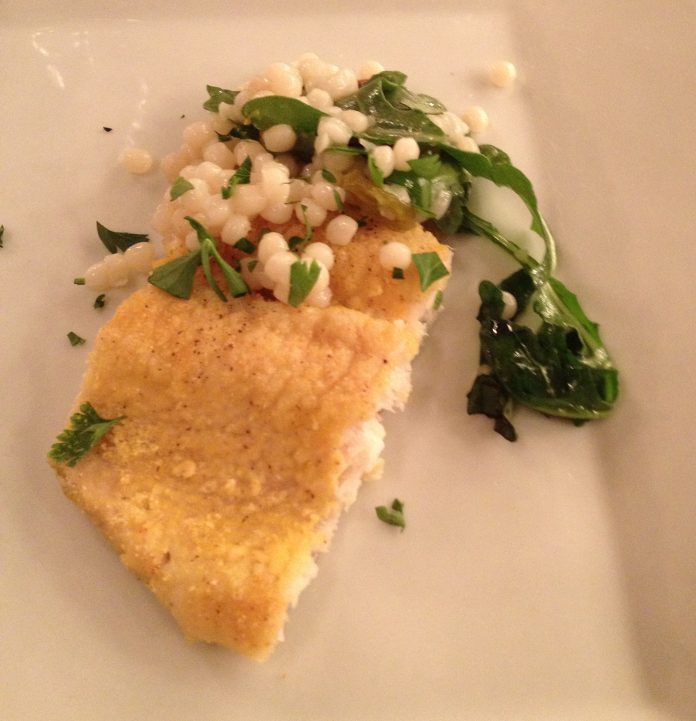 Zeal restaurant and bar opened Friday in the East Cobb shopping center just down the street from Doug Turbush’s Seed and Stem, at 1255 Johnson Ferry Road. The corporate-restaurant veterans behind Zeal—managing partner Scott Sawant (previously of La Madeleine), executive general manager Michael Braver (of Hilton Hotels and Ruby Tuesday), and executive chef Eric Mulville (of Maggiano’s Buckhead)—are approaching their fledgling venture (broadly labeled a “modern eatery”) as the first of many restaurants to come: They plan to open nine other concepts in the next seven years.

While future endeavors will be more focused of a specific cuisine—seafood, high-end Mexican, Italian, fanciful pub fare, and a soup-salad-sandwich-sushi spot—the group opted for a more “international” approach for Zeal. Like the space—dartboards and flat-screens, a sleek bar and low couches, light wood communal tables lit by Edison bulbs—the menu is a collage of influences. There are appetizers like garden hummus on ciabatta chips and crispy chicken lollipops with mango chipotle; portabella sliders and balsamic glazed chicken and arugula flatbreads; and entrees that include lamb stuffed with pine nuts, mint, and golden raisins in a light curry cream or ribs given a Southwestern makeover atop green chile grits. Then there are the eight “share plates” that can be ordered in both small or large sizes and include seafood carbonara and skirt steak. The menu also offers sandwiches, salads, and sides like lobster macaroni and cheese.

Braver describes the restaurant as farm-to-table, noting that almost everything is locally sourced and 80 percent of the menu items can be prepared gluten free. The breads come from Bernhard’s Bread Bakery off Marietta Square, the beef from a farm in Florence, Ala., where Kevin Gillespie sources Gunshow’s beef, and the ketchup and mayonnaise are made in house. He says their newly formed SK Restaurant Group had been looking to open Zeal in Colony Square, but they saw a need in Marietta.

“We looked at Jason Hill’s menu [Wisteria] and turned it upside down. We also used Ron Eyester [Rosebud, the Family Dog, and Timone’s] as a sounding board,” he says. “Our clientele is a little more established. They want to taste what they know, so we’re giving old favorites a spin.”

Once Zeal settles in, the plan is to begin construction on a seafood spot Braver describes as “similar to what Ford Fry is doing at the Optimist,” possibly in March. Mulville will lead the menu, testing out dishes as specials at Zeal. He’s training recent graduates of the Culinary Institute of America, Johnson & Wales University, and Le Cordon Bleu at Zeal now, grooming them to lead the kitchen in future SK restaurants.