Home Restaurants One last voyage for Dante’s Down the Hatch? 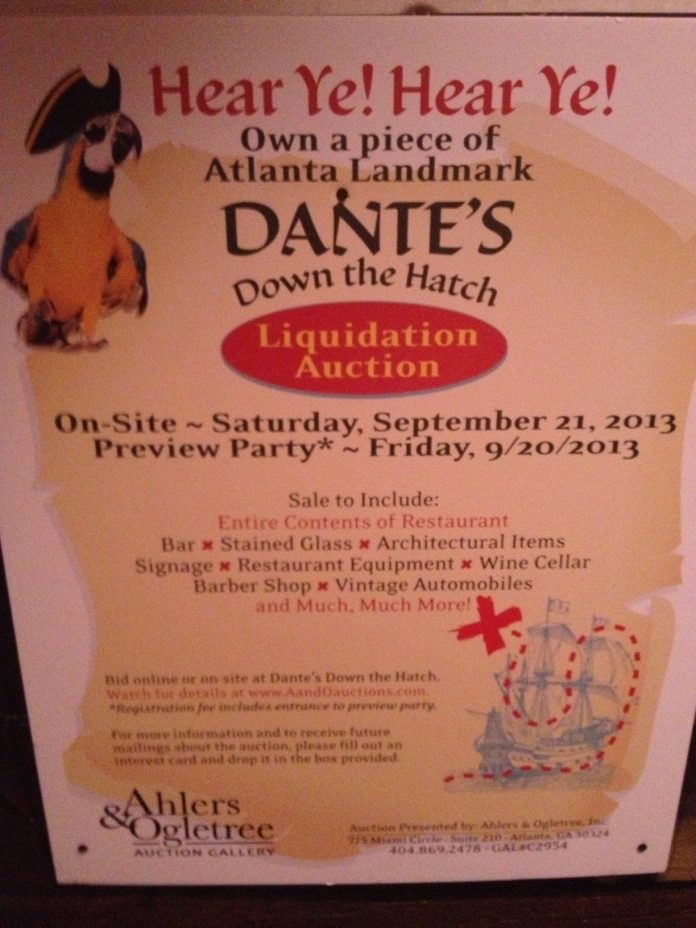 This week, as longtime employees stopped by to pick up their final checks and his phone continued to ring off the hook, a full week after Dante’s Down the Hatch officially closed, the landmark Buckhead fondue and jazz emporium’s owner Dante Stephensen faced some difficult decisions. With a wrecking ball tentatively set to begin swinging at his 43-year-old business at 3380 Peachtree Road on October 31 and representatives at Ahlers & Ogletree Auction Gallery eager to auction off everything from the vintage autos parked out back to the last Dante’s daiquiri cocktail glass on September 21, the 77-year-old restaurateur has to figure out his future — and fast.

“I’m continuing to look at locations,” Stephensen told Atlanta magazine. “If I’m going to do another place, which is still on the tip of my tongue, I’ve got to do it quickly because I’m committed to these auction folks and they would have to release me from the deal because I would want to take some of this stuff with me.”

While Stephensen declined to put odds on rolling the dice one last time with a new Dante’s Down the Hatch location, a couple of factors are giving him pause. “To be honest, I don’t like the condition of our economy right now,” he explained. “And I’m old enough that I don’t want to deal with the pressures of Obamacare. It scares the hell out of me. My industry has been hit particularly hard by Obamacare. They’re making some modifications to it now but, who knows. At Dante’s, we offered a health plan. Our employees could sign up for it if they wanted and they paid into and we paid into. That’s the way it should be. But to force it on everybody? It sounds good but I don’t know if it will work and I’m pretty scared about that.”

So far, the veteran Atlanta businessman hasn’t found a lot of safe harbors for his ancient schooner and crocodile residents. “I’ve been looking at places since November and there aren’t many out there,” he said. “I understand Fulton County’s problem. I don’t support it but I understand it. We are in the highest taxed county in the state and Buckhead is the highest taxed region of the county. And we are the second-highest taxed piece of property here. We’re paying a tax as if we were a 30-story building and their attitude is, ‘If you don’t like it, move on.’ If I see a place I really like, where I think it will click, I would try and go for it.”

Regardless, Stephensen is taking care of his loyal staffers who stayed with him until closing night on July 31 (on the final evening, every staffer was given a red gift bag and included in each was a Dante’s Down the Hatch T-shirt with the slogan “Employees Who Give A Damn” printed on the back). Every staffer who has been at Dante’s Down the Hatch three years or longer is receiving a one-year severance package. “Take care of your staff,” Stephensen explained of his business model. “If you take care of your employees, they’ll take care of your customers. And if I re-open, those employees will come back. When we had our fire [in 2001], 55 employees found other jobs and when we re-opened seven months later, 53 came back. That’s our legacy.”

The restaurateur was off to scout more properties this week. “It could happen,” he said with a puff on his pipe. “You can’t hold a Navy SEAL down for very long.”