Home Restaurants Q&A with Micah Willix of Latitude
ATL Food Chatter: October 31, 2011
(To receive the Chatter and other culinary tidbits directly in your inbox, sign up for our weekly dining newsletter)

Just when it seems that every hot new restaurant is either a Buckhead big box featuring standards like surf and turf or a small, chef-driven resto in an emerging intown neighborhood featuring local fare, along comes an intimate Buckhead chef-driven restaurant—inside of a mall of all places—that promises to offer innovative global cuisine and revamped classic cocktails

The completely overhauled space, designed by Atlanta interior designer Brian Watford, will seat seventy-two inside and thirty on the patio.

Willix recently chatted with me about why he left Ecco, how he chose the name Latitude, and his vision for the restaurant.

Q: After 5 years with the Fifth Group at the nationally renowned Ecco, you left to operate your own restaurant here in Atlanta. Was this a long-term goal of yours or did you have a deal too good to pass up with Latitude?
MW: Being able to develop and introduce my own concept has always been my greatest professional aspiration. It was simply a matter of all the pieces coming together at the right time, and I am very fortunate to have great partners who are well respected within the industry working with me to bring the Latitude concept to fruition.

Q: With so many of the new/proposed restaurants in Atlanta being neighborhood bistros, why did you select Buckhead and upscale dining for your first project?
MW: When selecting the location for Latitude, Buckhead quickly become the obvious choice, and I think the area has a lot of great opportunities to offer chef-driven restaurants. Not only is the space one of the best in the city in regards to exposure and convenience, but it lends itself to creating the quaint feel that we want. The dining room is just the right size with seventy-two seats—just big enough to offer great energy and just small enough to be cozy and comfortable.

Q: How specifically will Latitude’s menu be different from your award-winning food at Ecco?
MW: At Latitude I will continue to honor my commitment to utilizing only the finest-quality ingredients but I will be doing so on a broader scale as I begin to incorporate a wider range of flavors to create a more globally inspired menu. I used traditional European cooking techniques at Ecco to create a specific experience for diners. The next natural step in my culinary journey was to fuse those methods with new, innovative techniques to offer Atlanta diners something fresh and unique.

Q: Where did the name Latitude originate?
MW: We wanted a name that brought to mind the global concept of food and drink that we will offer our diners. Latitude represents procuring the best cuisine, dishes, and ingredients from around the world and then presenting them to our guests.

Q: You selected an architect/interior designer, Brian Watford, who has not done a lot of restaurants here in Atlanta. What inspired you to make that choice?
MW: Our goal was to select an architect with a talent for designing beautiful yet comfortable spaces. We want to create an environment that is not only innovative but also feels homey and welcoming.

Q: What restaurants, either local or national, would you describe as being comparable to Latitude in terms of menu and style?
MW: We hope to create an entirely unique dining destination with Latitude and not draw comparisons to other restaurants. Atlanta is one of the foremost dining cities in the country and I believe one reason for that is because each restaurant has something unique to offer diners while remaining dedicated to offering delicious, quality food no matter if it is globally or locally inspired. Atlanta chefs have a high demand for quality product and probably compete more for local farmers than guests at times.

Buckhead. Travelgirl editor Jan Shroder raves about her experience at Southern Art on her Girl on the Go blog .

According to its PR firm, Ocean Prime, which opened Tuesday, October 25, raised nearly $5,000 for Project Open Hand, a community-based non-profit and the nation’s largest provider of home-delivered meals, during a special pre-opening celebration held on Thursday, October 20.

Downtown. During the month of November, the Downtown Dining District is offering $5 drink and appetizer specials five days a week starting at 5 p.m. The promotion, Five After Five, will feature restaurants in downtown Atlanta, which offers more than 300 diverse dining and nighttime options.

Dunwoody. Wildfire, a steakhouse from Chicago-based Lettuce Entertain You, is closing on December 21. According to Tomorrow’s News Today, the location will become Atlanta’s second Capital Grille because its parent company, Darden, bought out Wildfire’s lease.

On Monday, November 7, Joon Lim, winner of Taste of Atlanta’s first-ever Best Sommelier competition, will become bar manager at Rathbun’s, according to Cliff Bramble, Rathbun’s co-owner. Joon, who is a Certified Wine Specialist via the Society of Wine Educators and a member of the Guild of Sommeliers, formerly worked at Kevin Rathbun Steak.

Taqueria Tsunami is opening its second store at 70 South Park Square in November, according to a report in the Atlanta Business Chronicle’s online edition. The Asian fusion eatery will occupy 2,500 square feet.

Morningside.  The Family Dog will kick off Sunday Jazz starting on November 6. Sunday Jazz is a series of free live music evenings featuring local group The Trio along with a different guest artist every week. Admission is free, and full food and beverage menus are available.

Smyrna. Dameren Parenteau, who has been with Muss & Turner’s since 2009 and has worked his way up from dishwasher, has been promoted to chef de cuisine.

Westside. Just when you thought Kamal Grant’s shop couldn’t get any better, it does! Sublime Doughnuts now offers an assortment of house-made ice creams and also features some ice cream doughnut combos, according to Foodie Buddha.

Question of the Week: What Art Institute of Atlanta culinary grad is part of the leadership team for a recently opened intown wine bar? 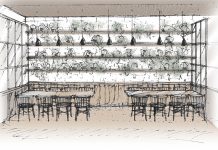 Community Smith takes over the Briza space in January