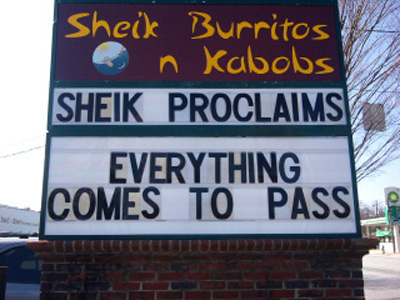 After three years in a nondescript shopping center on Piedmont Road just south of Buckhead, Sheik Burritos n Kabobs will close its doors on December 23. Owner Jahan Ostad said Sheik is by no means going out of business—he plans to reopen in a larger location in Midtown or Poncey-Highlands in spring of 2013.

The upcoming closure is a result of the shopping plaza being under contract with developer Archstone. The deal is scheduled to close at the end of this year. If it goes through, the plaza, including the Sheik Burritos unit, Pots ‘N Pans restaurant and Taco Cabana, will be demolished and turned into apartments with possible retail space underneath. Ostad said Archstone posted “Now leasing for 2014” signs and announced plans to break ground in the second quarter of 2013.

To celebrate Sheik’s temporary close, the restaurant is hosting a “3 Year Going Away Party” on December 16 from 2 p.m. until dark, weather permitting. This free event will feature King of Pops, live rock ‘n’ roll by the Sheik Allegiance Band (a group of regulars playing covers), a burrito-eating competition, and several “very special guests,” Ostad says. The burrito-eating competition costs $20 to enter but is free for those who eat at least three burritos. SweetWater beer may be provided as well.

Ostad says he sees the restaurant’s impending closure as a positive thing. “We’ve been stifled in our current location without the proper space to grow,” he says. “It’s bittersweet because of the fond memories we have here, but we welcome the closing of this chapter and look forward to the future.”

Sheik lovers fear not: the Persian-Southwestern burritos may just make an appearance at festivals or pop-ups, come New Year’s. Ostad is busy working on revamping the menu, and he has high hopes for expansion. “Four restaurants in four years in Atlanta, then nationwide—100 units!” he exclaims.