Lombardi Family Concepts plans to open the first Georgia location of Taverna in the former Thirteen Pies space in The Shops in Buckhead this coming October. The Dallas-based restaurant will serve pizza, risotto, and fresh-made pasta dishes such as spaghetti with lobster bolognese. There will also be an extensive drink menu that heavily features wine from California and Italy.

Alberto Lombardi, president of Lombardi Family concepts, wants to bring in a design team to overhaul the space. He plans on building an all-season patio, redesigning the bar, and putting the pizza oven in view of the dining room in order to make the space feel more like the other Taverna locations.

Even though this is first Georgia-based location of Taverna, it is not Lombardi’s first venture into Atlanta. “We opened a restaurant, Lombardi’s, in Underground Atlanta many years ago, in 1994, I believe,” he says. Even though the restaurant had a few good years, he closed the restaurant in the early 2000s.

Lombardi is confident that the company’s newest Georgia restaurant will be much more successful. While he has yet to hire somebody to run the kitchen, he wants the chef to add local flavors to the menu. “We have Tavernas in Dallas, in Laguna Beach, we’re opening one in Houston, but I don’t call it a chain,” Lombardi says. “Every restaurant is personalized. We change the menu according to every city and the ingredients we find.” 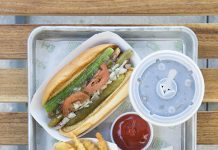 Fresh on the Scene: New Atlanta restaurants to check out in December