For those who haven’t yet had the pleasure, chef Pat Pascarella describes it best: it’s like mozzarella squared. The chef-owner of restaurants like the recently opened Bastone and the White Bull explains that the cheese, which originated in the Puglia region of Italy, consists of a mozzarella shell that’s filled with a salty blend of cheese curds and fior di latte (sweetened cream). The result is a soft cheese that resembles a blob, but is extremely satisfying to cut into and gives way to a thick, creamy interior when you do.

Burrata is rich and can easily be served on its own with some bread. “We want the burrata to be a star of the show, so it’s literally just a little bit of olive oil on top,” says Pascarella of the serving style at Bastone. However, it’s also a blank canvas of sorts which makes it versatile and a delicious companion to sweet and savory items alike. You can find it in salads, atop pizzas, and even in pasta. Here are 14 burrata dishes to enjoy in Atlanta right now.

Bar Margot
The swanky restaurant inside the Four Seasons offers a textural spin on the burrata dish. They pair it with house-made pistachio butter, grilled stone fruit (plums for now, peaches when they’re in season), sorghum, and French batard for dipping and spreading.

Sugo
In Johns Creek, burrata is a worthy meal opener before those pasta dishes that Castellucci Hospitality Group restaurant is so known for. The burrata is presented on its own plate with a drizzle of olive oil but comes with accoutrements like prosciutto, marinated tomatoes, and grilled bread. Pair it with a Pour Man’s Ferrari (their cocktail made with Fernet branca, Campari, and orange bitters), and your aperitivo is set.

Lyla Lila
Pasta is the star at this chic Midtown restaurant helmed by chef Craig Richards. It’s no wonder, then, that they bring pasta and burrata together for a dish of cappelletti ravioli with field onions, squid ink breadcrumbs, and osetra caviar.

South City Kitchen Avalon
At South City Kitchen’s Avalon location you can find a match made in heaven: burrata and grilled peaches. We are in Georgia, after all. It’s also served with speck ham and focaccia crisps.

Bastone
Of course, the self-described mozzarella bar has not just one variety of burrata, but three. Each burrata comes from a different place—there’s the burrata from Puglia, but also a burrata from North Carolina and one from California. You’ll have to order one of each to see how they compare.

Oreatha’s
The recently opened Oreatha’s at the Point has burrata with a Southern twist. Here, it’s served in a panzanella salad with collard greens, toasted cornbread, heirloom cherry tomatoes, and red wine vinaigrette.

The Select
Located in the City Springs development, the French-inspired brasserie serves up a refreshing burrata and beet salad. Expect a dish that’s salty, earthy, sweet, and crunchy with burrata, roasted beets, as well as olives, pickled onions, hazelnuts, crispy Serrano ham, and a lemon vinaigrette.

Bellina Alimentari
Ponce City Market’s laidback Italian restaurant is a casual spot to post up and sip a glass of wine—and a snack, too. Their burrata with arugula, strawberries, black pepper, and vin cotto (a syrupy wine reduction) is best enjoyed with a glass of Arneis, says beverage director Demario Wallace.

Taverna
Taverna is an upscale-casual restaurant with a killer patio located in Buckhead Village. They have two burrata dishes on the menu, but if you’re going to pick just one, go for the pizza topped with burrata, cherry tomatoes, and mozzarella (because more cheese is never a problem).

The Usual
Nick Leahy’s newest restaurant concept, The Usual, is located in Buckhead. When it comes to burrata, he serves it with herb oil-marinated tomatoes, saba (similar to balsamic vinegar), and little gem lettuce.

Biggerstaff Brewing
Beer and burrata can totally be a pairing, especially at Biggerstaff Brewing in Old Fourth Ward. They serve up a burrata toast with Italian olives, roasted tomatoes, and basil all on sourdough.

Mozza Bella
If you find yourself craving burrata on the west side, head to Mozza Bella, which recently opened its stall in the Chattahoochee Food Works. They have a tasty combination of burrata with prosciutto and house-made focaccia.

Le Bon Nosh
Some like it hot, and if you’re “some” then Buckhead’s Le Bon Nosh has you covered. The European-inspired cafe has a burrata starter with Serrano pepper, arugula, coriander seeds, and olive oil. 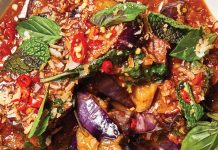 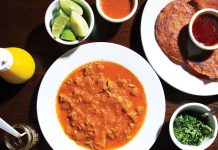