Home Uncategorized The only cheese dip recipe you’ll ever need, plus 6 other things... 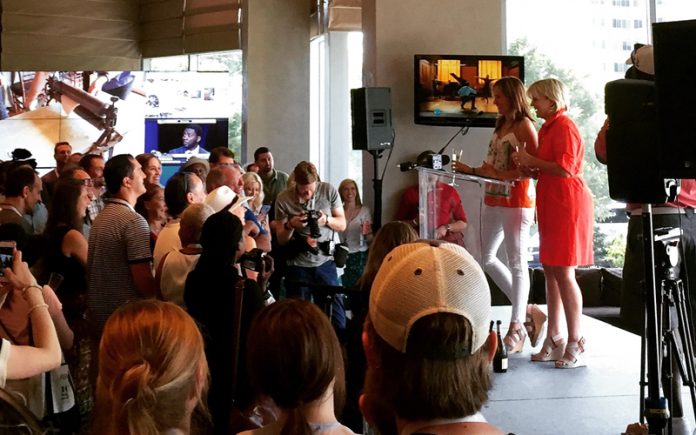 Thousands of festivalgoers, chefs, mixologists, cookbook authors, and other food and drink authorities descended upon Atlanta over the weekend for the 5th annual Atlanta Food & Wine festival held at the Loews Hotel in Midtown. Organizers Dominique Love and Elizabeth Feichter have put in more elbow grease than the fryers at Popeyes to rally the region’s most talented culinary minds to our city. Below, a few observations from my time at the event.

Those who didn’t take Uber or Lyft clearly did not understand how this worked. When you’re paying anywhere from $185 for a day pass and up to $2,000 for a three-day VIP experience, you bet people were consuming every fine spirit and morsel they could find. For many, the four-day fiesta started around 10 a.m. and stretched late into the night at one of several after-parties, one of which, reportedly, ended at the Clermont Lounge.

Finding something to eat was oddly hard to do. Unlike last year, food beyond the nibbles offered in (some) classes was almost nonexistent. I found plenty of cocktails, Coca-Cola, and something called Coca-Cola Life (more on that next) but nothing to tide me over until the tasting tents opened later in the afternoon. Even the Connoisseur Lounge for VIP-ticket holders had zero food the times I poked my head in (but plenty of Stella Artois). All of which to say: breakfast and lunch on Saturday was two glasses of boozy punch, a flight of wine, and a handful of Goldfish crackers.

Coca-Cola Life is disgusting. Imagine if Diet Coke had a hangover—and was sweetened with Stevia. But hey, it’s got 60 percent fewer calories than regular Coke!

Justin Amick, the high energy wine-whiz who owns the Painted Pin in Miami Circle, might be the only advanced level sommelier to describe a wine as having cherry notes so excessive as to be “up the ass.” Enough said.

The only cheese dip recipe you’ll ever need is from Mark Abernathy, the first chef in America to serve white cheese dip from his restaurant in Little Rock, Arkansas (the birthplace of cheese dip and the site of the World Cheese Dip Championship, seriously). His recipe: In a double boiler, melt 2 ½ lbs. of extra melt cheese (cut into 1’’ chunks) in 2 ½ cups of whole milk. Add 16 oz. of shredded Monterey Jack cheese and 1 lb. of shredded white cheddar. When all of the cheese has melted, add 1 cup of chopped, roasted green chilis, ¼ cup of chopped onions, ¼ cup of chopped cilantro, 1-2 jalapeños diced small, 1 mined garlic clove, 1 tsp. of ground cayenne pepper, 1 tsp. of cumin, and 2 tsp. of black pepper. Cook for 30 to 45 minutes until the onions are clear and soft. If it’s too thick, thin with a little warm water. Set aside and cool to room temperature before refrigerating. To reheat, microwave.

If you didn’t pre-register for classes, you missed out. No doubt a testament to the festival’s popularity, 32 of the 82 classes offered over the weekend had already sold out by Thursday night. And nobody could slip past any of the volunteers: Love and Feichter run a tight ship, and their clipboard bouncers were about as hardcore as airport security on a Friday. [Editor’s clarification: For some classes, not everyone who had pre-registered showed up. In those cases, their seats went to other attendees in line at the door.]

There’s nothing wrong with leftovers. Missed out on the Texas wine seminar or didn’t catch the demo on (edible) invasive species? On several occasions I walked into classes as people were walking out to see what leftovers the host had. Success Rate: 100 percent.