Brian Maloof speaks of chickens with a combination of reverence and zeal. For several years, he has been having visions of chickens; they would come to him in dreams, while he was praying, when he’d hear the Big Chicken mentioned on the radio. “I just kept seeing chickens everywhere,” says Maloof, the owner of Manuel’s Tavern, the iconoclastic bar known as a center of lively political debate and for the quirky mementoes adorning its walls. (See more on the history of Manuel’s in the feature from our August issue, here.)

Maloof couldn’t shake those seemingly prophetic images of poultry, and thus began the “roof-to-table” egg-laying operation. Bill McCloskey, who’s worked at Manuel’s for more than four decades, thought his boss was crazy and tried to get customers to chime in likewise. But rather than suspecting Maloof of insanity, they found the idea charming.

The rooftop chicken coop, a luxurious 550 square feet, went into operation in early 2014. Maloof and the tavern are certified by the state agriculture department to serve the organic eggs in the restaurant. Built entirely from recycled or repurposed materials, the coop includes a cozy climate-controlled hen house (where eggs are laid) and a spacious outdoor “porch” screened from the elements and cooled in the summer by fans.

The flock is small—just twenty-four hens—which means that each chicken has plenty of space to roam as well as a comfy nesting box. By contrast, many commercial laying operations  confine hens to cages that measure about one square foot. A diminutive rooster named Thor keeps the hens productive; he’s a Bantam, which means he crows just loudly enough to serve as a chicken coop alarm clock but not loudly enough to wake the neighbors on North Avenue and North Highland. (Any romantic overtures on Thor’s part are ignored by the hens, notes Maloof. “They will have nothing to do with him that way.”)

The flock produced about 20 eggs daily in winter and spring and has been producing about 15 during the summer. So for now, the eggs are reserved for weekend brunch specials.

“They are the fluffiest eggs I’ve ever made,” swears Angela Jackson, who has worked in the Manuel’s kitchen for fourteen years. Indeed, having sampled a plate of Jackson’s scrambled eggs after a rooftop tour and a steak omelet on a subsequent weekend visit, I can attest to that.

For now, the egg operation remains small, but Maloof is having more visions: One day he hopes to operate a small farm with organic produce and eggs. 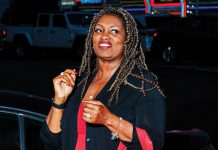