If you’ve never tasted pastured chicken (and most Americans under the age of 60 have not), this is a good week to change things up a little. In Georgia and New York, it’s Pastured Poultry Week.

Launched last year by the advocacy group Georgians for Pastured Poultry to highlight the benefits of birds raised in a more natural habitat than conventional broiler houses and to encourage the curious to try it. This year, 55 restaurants in Georgia and two dozen in New York City are featuring pastured poultry on their menus through June 16.

Like most “sustainably raised” foods, pastured chicken is retro-cool. Until 80 or 90 years ago, all chickens were “pastured,” raised in backyard or barnyard flocks to provide eggs and, on special occasions, meat to families or a few customers. According to the National Chicken Council, the commercial broiler industry (birds raised exclusively for meat) did not take off until after World War II. By the early 1950s, broiler production outnumbered farm chickens as the country’s primary source of poultry meat.

There are lots of good reasons to try old-fashioned pastured poultry—among them compassion, health, environment and taste. Factory-farmed birds have little or no access to the outdoors and are raised in cruelly crowded spaces, where they are exposed to disease and a great deal of stress during their short, miserable lives. In contrast, pastured birds spend their days outside with rooms to stretch their wings … and to scratch, peck, and generally act like birds. Because they do not experience the stresses that high-population broiler-house chickens endure, they do not require routine antibiotics to keep them alive. As farmers move flocks from one patch of land to another, the birds’ excrement naturally nourishes the soil they have lived on. And chefs say that the lean meat of chickens raised this way have a fuller flavor.

You can read more about the benefits of pastured poultry here. And then try it for yourself at one of these restaurants this week. 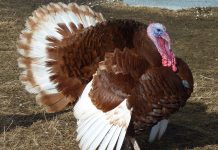 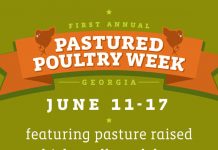 Here’s your chance to try a real chicken