Home Restaurants “Why Can’t the Lawrence Keep a Chef?”

Open for less than a year, the Lawrence—a highly anticipated Midtown restaurant and bar by Top FLR veteran Darren Carr and Dinner Party Atlanta founder Patrick La Bouff—is already on its third chef. Shane Devereux (also from Top FLR and its sister gastropub/club Sound Table) was the opening chef. Then Jonathan St. Hilaire, previously a pastry chef and owner of the now-defunct Bakeshop, took the reigns in November 2012. Now, St. Hilaire is gone, and Jeff Sigler, who worked alongside Richard Blais at Element, is in charge.

The Lawrence co-owner Darren Carr says Sigler is in it for the long haul. “Jeff is not a temporary chef,” he says. “I know tongues are wagging: ‘Why can’t the Lawrence keep a chef?’ It’s not like that at all. I always knew Jonathan would be leaving town. He and his wife wanted to get out of Atlanta and start fresh somewhere else. The opportunity for the bakery he wanted just came up sooner than I expected.” (St. Hilaire and his family recently moved to Michigan.)

Carr points out that Sigler worked in the kitchen there under Devereux last summer, so he’s familiar with the restaurant. “He’s showing himself to be a good, mature chef. He understands he’s cooking for people, and his personality is coming through in his food,” Carr says.

To that end, Sigler says he’s already transitioning the Lawrence menu, keeping the accessibility and affordability St. Hilaire’s menu offered, while bringing back some of the creativity Devereux brought the restaurant. After only nine days at the restaurant, he’s already changed nearly forty percent of the menu.

“We realized we needed to appeal more to the neighborhood,” Carr says. “What we tried to do at the beginning was a little too creative for the time and the place that we were in, so we’ve cooled it down a little.”

“The Lawrence is a business bigger than any one chef. It’s a neighborhood restaurant that will keep on producing quality food no matter who’s at the helm,” Carr says. “Think of this as another opportunity to try the Lawrence again. How many other places do you get to eat at where you can try the food from so many different chefs?” 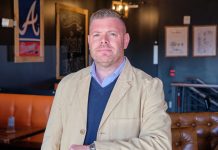