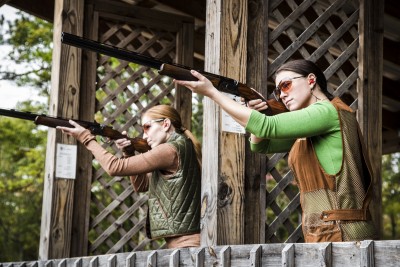 Driving through Adairsville, I nearly missed my turn for Barnsley Resort. It’s a 3,300-acre enclave tucked inside this mostly rural town in northwest Georgia–when the rolling pastures gave way to a manicured golf course, I should have known I’d found it. When at last I turned into the main drive, I told security I was there for a shooting-and-spa weekend. Exchanging chuckles, he showed me and my friend to guest services, where we were given the keys to our cottage and a detailed itinerary of the events that were planned for us.

Schedules in hand, we drove to the back door of our cottage, which fronted onto the main lawn. It had everything a hotel typically doesn’t: pine floors, a claw-foot tub, a private porch. I helped myself to a strawberry from the plate of fresh fruit the resort had left for us and realized just how hungry I was.

Good thing lunch service had just begun at Woodlands Grill, the resort’s casual restaurant with a hunting-lodge feel. Famished, I indulged in a burger so big, I thought my friend, disgusted, might leave me alone at the table.

But I needed the sustenance, and perhaps even the hunting-lodge ambiance. Because next, it was shootin’ time. I’m a city girl and so is my friend, so to us, guns are big biceps, not ammo-packed firing machines. We walked to the SpringBank Sporting Club, where we met Skip, who taught us that a little fear of firearms is healthy. After inculcating us with a holy reverence for gun safety , it was time for the games to begin.

I’d like to tell you that I started with a bang (pun intended), hitting every target and holding perfect form. But that didn’t happen until Skip got in my brain and picked around for a minute. At first I didn’t understand why he was prying about my hobbies and sports interests . But when he learned that I love tennis, he began to relate shooting and aiming to serving and volleying. Imagining the moving target as a tennis ball, and never, ever, taking my eye off it, I soon was hitting every flying target as if I’d been shooting for years. Whether or not I was as talented as Skip told me , I had a blast learning the art and game of sporting clay shooting.

After an afternoon of shooting, I was hungry. Again. We changed and walked to the Rice House, the resort’s fine-dining restaurant set in a nineteenth-century farmhouse. Over three courses, we nibbled on lobster waldorf, wolfed down a hearty New York strip steak, and finished with the chocolate-dipped strawberry cake. Then we strolled back to our cabin, but not before stopping to roast a s’more at the outdoor fire pit.

The next morning, we learned about the resort’s rich back story during a tour with resort historian Clent Coker. In the nineteenth century, wealthy businessman Godfrey Barnsley built a garden-framed estate on the property for his wife, Julia. In a tragic twist, Julia passed away from an illness before she could ever appreciate the finished home. In the ensuing years, the manor saw family intrigue, tornadoes, and plenty of Civil War action, and its ruins still stand on the resort’s property, along with the gardens.

It was almost time to leave, but before I did, there was one thing left to do–and it rhymes with “ah.” My shoulders were sore from the previous day’s shoot, yet my mind was relaxed from a full twenty-four hours’ escape from city life, so it was the perfect time to try the Inner Peace Body Treatment at the spa. My therapist massaged me with a dry brush from head to toe as soft ocean sounds echoed through the room. Falling asleep, I swear I nearly drifted to heaven; I then awoke to the pleasant realization that this was not a dream. As I closed my eyes again, I rolled back into relaxation as I was treated to a foot massage and facial. By the time I was finished with the treatment, I smelled like I had just emerged from the very gardens I had toured that morning.

As I got in my car and drove out the very road I’d almost missed, I couldn’t help but smile. I’d be back for more shooting and spa-ing, and I wouldn’t zoom past that turn again.