The USDA scored every census tract in the country by location of grocery stores and income distribution. Metro Atlanta is no land of plenty.

Food Deserts
Shaded in red, these are areas with at least a 20 percent poverty rate and in which at least a third of residents live a mile from a grocery store. Food deserts in the city include the neighborhoods near Turner Field, downtown Atlanta, and Sweet Auburn. Suburban food deserts include Lithonia, Stockbridge, Clarkston, Conyers, South Cobb, and parts of Smyrna.

Low Access to Fresh Food
Shaded in yellow, these are neighborhoods where at least a third of residents live more than one mile from a grocery store (ten miles in rural areas). Intown communities that fall under this classification include Cabbage­town, Grant Park, portions of Druid Hills, and Oakhurst. Large sections of suburban Fayette and Gwinnett counties are designated as low access.

The perils of “food swamps”
When the only food available is high in calories and low in nutrition, health suffers.

357
The average number of calories in snacks bought by grade-school children at urban corner stores, according to a study in Pediatrics. Those calories were cheap: Kids spent an average $1.07—on candy, chips, and sweetened drinks. The conclusion: The rate of childhood obesity in lower-income neighborhoods is related to the prevalence of convenience stores.

70%
Rate of obese children who have at least one
cardiovascular disease risk factor; 39 percent have two or more.

$2.1 billion
The amount spent annually in Georgia to treat obesity-related diseases. By 2030, the adult obesity rate could be 54 percent—up from 29 percent.

40 grocery stores
serve all of Clayton County—compared with 175 in Fulton County. With no public transit, many Clayton residents have no choice but to shop at the county’s 152 convenience stores.

75,000
residents of Cobb County live in food deserts. According to the USDA, the metro counties with the highest rates of low-income residents and low access to grocery stores are Clayton, Rockdale, and Douglas.

600%
Increase in farmers markets in Georgia between 2007 and 2012. But many markets are out of reach for Atlantans without transit.

This article orignally appeared in our March 2014 issue. 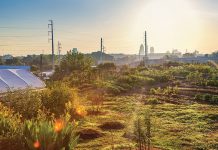 Maps: A grocery trade imbalance and diet-related deaths in Atlanta