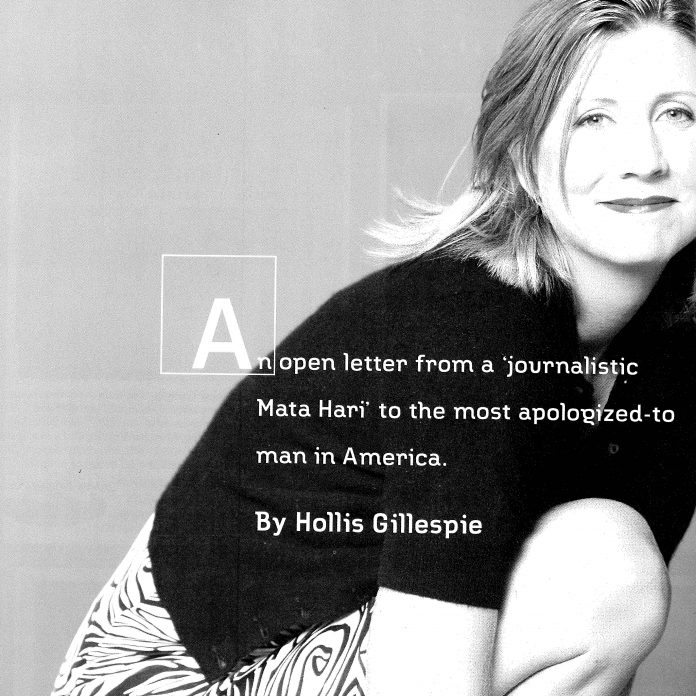 This article originally appeared in our October 1997 issue.

We had dinner last January?

We haven’t seen much of each other since. Nevertheless, I’ve always remained interested in any news about you, so I eagerly started reading a New York Times story in July that said one of the the most insurmountable hardships you’ve faced since the media and the FBI incorrectly fingered you as an Olympic bombing suspect is that you lost your ability to trust people.

“That will happen, he says, when the only woman you have dated in a year sells her story to a magazine,” the Times reporter wrote.

Wow, I thought to myself, who is this bitch?

Imagine my surprise when I realized the bitch was me!

“Perhaps more than any other incident,” wrote Times-man Kevin Sack, “Mr. Jewell’s date with Hollis Gillespie, an Atlanta freelance writer whom he had met on an airplane, seems to have deflated his dreams of normalcy.”

Wait a minute. The article I wrote about our evening was a five-paragraph testimonial to what a nice guy you were. And now all America thinks I’m the biggest downside to your unwanted notoriety?

Very special, because I still have the answering machine tape of the phone message you left me thanking me for what I wrote. Let’s listen to it, shall we?

“Hollis, it’s Tuesday, April Fool’s Day, but I’m not joking, I gave you a call to say thank you for the nice things you wrote about me in the article in Atlanta Magazine—”

Why, you’re welcome, Richard. And I’d like to take this opportunity to thank you for questioning my integrity as a writer in front of the entire nation!

“—and to apologize. I would rather do this in person—”

You were apologizing because apparently you had misjudged me. Because when I told you I planned to write the piece, you had expressed apprehension over how it would turn out.

“I hope you understand that I’ve got a lot of things going on in my head. I’ve been burned by a lot of people that I was trusting, and I was scared about what you were going to put in there, to be quite honest with you. . . . I’d like to see you again and apologize in person. Maybe we can shoot a game of pool or something, or maybe I can cook you some lasagna or spaghetti or something. Give me a call. . . . “

What? You wanted to cook lasagna for a journalistic Mata Hari? Why would you extend another invitation to a person you would later complain about to The New York Times?

“I’ll talk to you later. I hope you’re feeling better.”

Why don’t you ask me how I’m feeling now, Richard? I was feeling fine, thank you, even after my surgery, until I read the Times. But at least Mr. Sack didn’t print my ill-conceived lament to him that I wished I had never written the story about you. And he didn’t mention my tacky request for a plug for the little biweekly newspaper that prints my humor column [for no pay, I might add).

Later you left another message for me: “This is Richard again, how you doin’? .. When I called you yesterday I forgot to tell you that I found that picture you were looking for and I went ahead and picked it up for you – the one with the dogs playing poker. So give me a holler, and I’ll either bring it over or I can meet you somewhere or something … Bye.“

Now, does a girl who enjoys paintings of poker-playing dogs fit the profile of a sophisticated conniver? Let me remind you that I never misrepresented myself to you. When I met you I didn’t say, “Hi, I’m a cashier at Kentucky Fried Chicken.” I said, “l’m Hollis Gillespie. I write a humor column in Atlanta.”

It was the second sentence out of my mouth when I met you, and I didn’t say it in the secret language that Siamese twins invent, either. It was pure English. And during our dinner at the Thai restaurant you kept saying to me, “For a writer you sure don’t ask many questions.”

So, you knew I was a writer going in. You thanked me for what wrote about you. You apologized for doubting me. And you asked me out again.

When did you change your mind about me? When was it you decided to offer up me and my little article as a symbol of the emotional pain you’ve been feeling after you were falsely branded a mad bomber last year?

I could have gone to the tabloids if I had been willing to lampoon you. But I didn’t. The story I wrote about you appeared in this magazine last April. The pay? $100. It was not enough to cover flea medication for my cat. She’s the size of a small walrus, her name is Lucille Ball, she has shredded my entire collection of used furniture, and she eats like a lumberjack lost in the woods even though her front teeth are missing. I’m not digressing here, Richard. I’m listing my assets, which, judging by the number of suits you’ve initiated, will interest you.

My story was five paragraphs bound with a birthday bow and now you’re using it as yet another example of the never-ending suffering of Richard Jewell.

In Washington, while testifying before a House Judiciary subcommittee about how you were handling the travails of notoriety as the world’s most famous nonsuspect, you said, “I just want to keep trying to be the man my mama raised me to be.”

Richard please don’t tell me your mother raised you to question a lady’s honor.

I’ve been in public with you twice. The only people who approached you were well-wishers — one group even raised their glasses and gave you a cheer. So now you dash around the nation’s capital while I cower beneath my desk, all snarly-haired and swatting at imaginary insects.

Everybody’s apologizing to you these days: the U.S. attorney general, congressmen, maybe even the gendarmes who confiscated your mama’s Tupperware. People are foaming at the mouth and falling over themselves to get in line to say they’re sorry.

So I’ll put it to you like this: I wouldn’t mind an apology myself. And that picture of the poker-playing dogs wouldn’t hurt either. 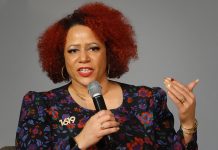 Journalist Nikole Hannah-Jones: “I want everyone to read [the 1619 Project] because it’s the American story”