Home News & Opinion Journalist Nikole Hannah-Jones: “I want everyone to read because it’s the...

New York Times Magazine staff writer and former Atlanta resident Nikole Hannah-Jones did something unheard of, even after she was told countless times by critics that her efforts would ruin her career.

But the calculated risk paid off. She curated the 1619 Project, a special issue for the Times developed entirely by African Americans that gives an unapologetic bird’s-eye-view on how modern inequality toward black people has evolved since enslaved Africans first landed on American soil in 1619.

The compilation of art, essays, photography, poetry, and interviews was released on August 20, 2019, 400 years after the arrival of the first African slaves, and has sold out numerous editions already. It trended on social media and received mixed criticism from historians, but Hannah-Jones says she was wowed when she received praise from everyone from Oprah to 95-year-old women living in the South.

The Pulitzer Center partnered with Jones, a MacArthur Fellow and Peabody Award winner, to offer a free curriculum around the 1619 Project for educators. Jones even raised funds to publish an additional 200,000 copies to distribute to various schools and community institutions.

Taking seven months to complete, the 1619 Project continues to expand. It’s now a podcast, a special section in the Times, an interactive website, a series of live events, and an upcoming series of books.

The former investigative reporter for ProPublica and the Oregonian was in Atlanta last week speaking at a handful of Dr. Martin Luther King Jr. Day events. The good-humored history buff-meets-news junkie came directly from delivering a keynote address before the Georgia Budget and Policy Institute to a speaking engagement at Morehouse College on Friday evening, where she also chatted with Atlanta about the 1619 Project’s origins and its ongoing acclaim, how she plans to continue to spread 1619 Project’s message across various communities, and her relationship with Atlanta.

Tell me about your connection to Georgia.
I moved to Georgia a year after I graduated from Notre Dame. Our Black Student Union had taken a trip to Atlanta. It was the first time I’d ever lived in a city where there were so many professional black people. I’d never experienced that before in my life. I wanted to live and experience a city where black people are running things because where I grew up [in Iowa], you didn’t see that. I worked for a year after graduation, saved, and just packed my bags, moved down here with no job. I lived in Georgia for two years, and I did a lot of partying [laughs]. I met my husband here. All of his immediate family are in the metro area, and we come here at least twice a year.

Is visiting almost like a homecoming for you?
I never lost a connection to the city. I actually thought Atlanta would be the place I would live forever, but it didn’t work out that way. I charge for speeches, but I don’t charge Historically Black Colleges and Universities. It’s a beautiful thing to be able to bring this conversation to [Morehouse’s] campus. It feels awesome.

Where exactly did the idea for the 1619 Project start?
That’s a hard answer. I’ve been thinking about this project for many, many years. It brings all of my past work into fruition in one place. Many of the stories and pieces of it are things I’ve thought about for a long time but didn’t have the opportunity or time to report. But around November 2018, I’d already been thinking about the 400th anniversary [of the first African slaves arriving in America]. I was on book leave, thinking about returning to work, and really just understanding that most Americans probably had never heard of 1619 and many important moments in our history. I started thinking what would be the best way to do that in the New York Times. I got this idea that we should dedicate an entire issue of the magazine not to telling history, but to actually assess a modern legacy of slavery. This was a chance to do that journalistically: make a sweeping argument across a spectrum of American life in ways that I hope will be very surprising to most Americans. I pitched it, and it went from there.

How did you keep all of the contributors to the 1619 Project on the same page?
It was very, very important to me that most of the people who are going to be telling this story were going to be the people who descended from those that were enslaved. We had to be the ones who were producing the project, so the writers, essayists, photographers, and original artists are all black. Seeing all of those black faces sends a message and sets the tone. We weren’t working in a newsroom. We didn’t have a cohesive unit because everyone was working remotely. [Instead] there was an intense understanding of the mission of what we were trying to do. A lot of folks had to move things around on their schedule to make it work. They were willing to do that because it was so important for them to mark this moment in this way. It’s a very hard history. There’s no part of the project I didn’t have a hand in. There’s the pressure of wanting to do right by the story and our ancestors. I knew there were going to be some white people who loved it and hated it. But if black people hated it, I would’ve been devastated. I was always thinking of who was I doing this for.

Your vision has become a special section in the Times, a free curriculum, and a podcast. How does that feel to see how the 1619 Project touches people?
It’s surreal. We were not trying to worry about white sensibilities and feelings with this project. To be able to actually do that in the paper-of-record is something I still can’t believe they let me do.

The 1619 Project is also being adapted to a book, right?
A series of books. We sold two adult books, a graphic novel, and four children’s books from elementary school to high school. The adult book will come out in 2021. It’ll be everything that you saw in the original project but expanded. There will be four to six additional essays covering different aspects of American life that were not covered in the project, and it features some other writers who weren’t in the project. 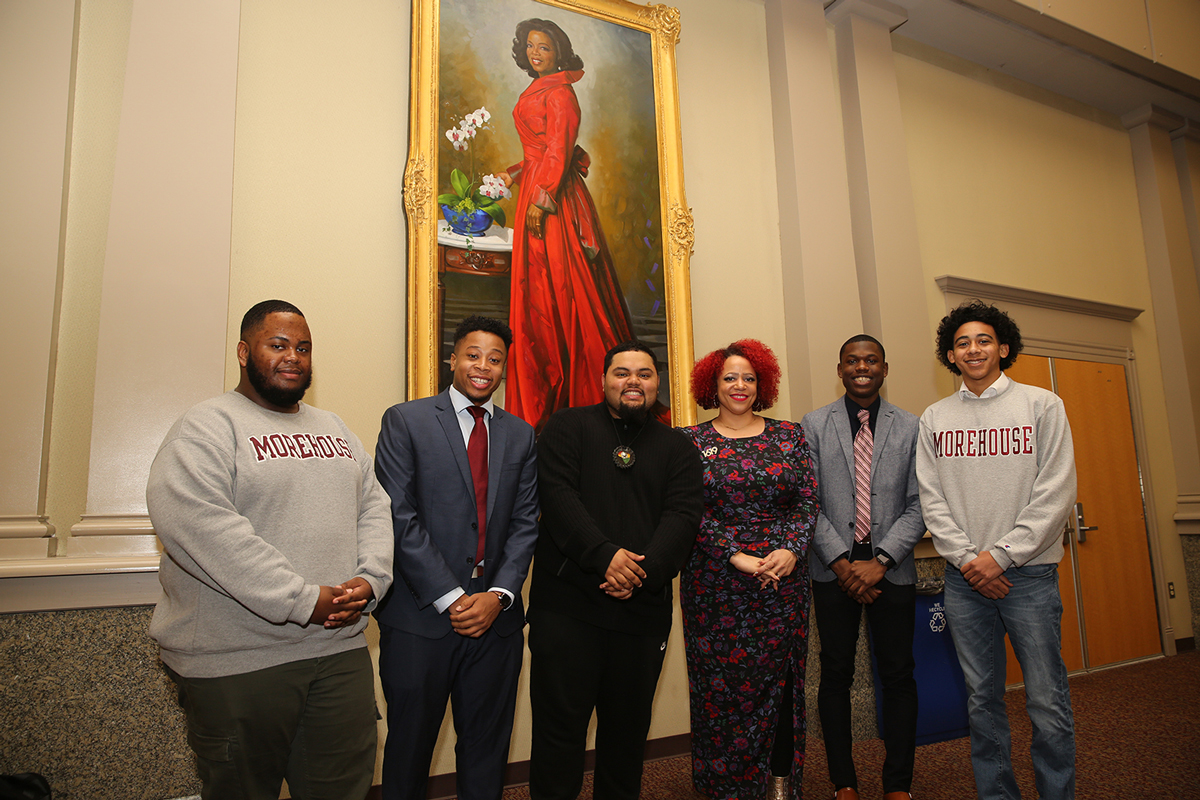 The Ida B. Wells Society for Investigative Journalism, which you co-founded, hosted a training workshop at Morehouse College. Tell me a little about that.
Our training is typically a day-and-a-half. The introductory boot camps are [to try] to help journalists get their feet wet in investigative reporting. It’s not going to take you from being a beat reporter to a projects reporter in one day, but what it will do is demystify a lot of the tools, give that basic framework, and really help folks understand that all journalism uses investigative tools. You don’t have to have six months to do a project. We cover a very broad range of topics. A lot of time, journalists of color don’t admit what we don’t know because we feel like people will take that and think that we’re incompetent and not supposed to be there. But you can come here, and we’ll give you those basic skills you can build upon. One of our key goals for the Ida B. Wells Society for this year is to train many more HBCU [students] to make sure we really reach the core group of folks we want to benefit.

What are you most proud of?
I’m really proud of how important the 1619 Project has been to black people. I’m very conscious of the audience at the New York Times. It was very, very important to me. I want everyone to read this because it’s the American story. It helps you not just understand black folks, but our country. I wanted to make sure that our communities were seeing this and engaging in it. It’s important we make this accessible to our folks. This is literally the first project in my 20 years as a journalist I think my regular, working-class family actually read. It mattered to them. I’m proud of the amount of opposition I’ve gotten to the project because what that tells me is people fear the knowledge in the project and [shows me] the ability for the project to be transformative about how we thought about black people and our country’s origins.