The only way to be more literally farm-to-table would be if this congenial Athens restaurant set up service in a pasture. Run by the Full Moon Farms and Moonshine Meats collectives, Farm 255 serves as a showcase for foods grown and produced in Athens and environs. The daily menu draws on what’s brought in fresh from the communal fields.

Luckily for diners, the menu pushes the boundaries of a crunchy do-good ethos. You don’t just eat virtuously at Farm 255; you eat well. Executive chef Whitney Otawka trained under Athens-based James Beard winner Hugh Acheson (and had her own star stint on Top Chef Texas) and that influence shows. On a recent visit we had a succulent braised pork belly on zesty kimchi-infused grits, a charming dish right out of the Acheson playbook (see Bill Addison’s review of Empire State South.) Otawka, who also put in time at Beard-winning Restaurant Eugene, shines when it comes to using fresh produce. A simple salad of pea shoots was revelatory.

The dining room is large and airy, offering views of the open kitchen and an outdoor patio/concert space. During the dinner hour you’ll see Athens professionals, UGA professors, and visiting parents treating students to a good meal. Later at night, Farm 255 also serves as an occasional band showcase, and the bar, open til 2 a.m. Thursday through Saturday, is busy.

Atlantans can get a quicker, cheaper taste of Moonshine Meats through Farm 255’s sister operation, Farm Burger (locations in Decatur and Buckhead). Athenians have the Farm Cart, a food truck that rolls into the Athens Farmers Market and provides late-night snacks on the Farm 255 patio. 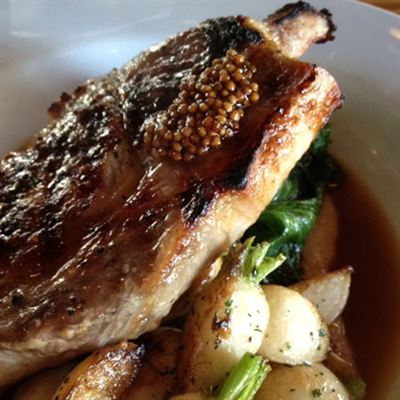