Shami Kabab isn’t a place you visit for the ambience. Burgundy saturates the eyes: It’s the color of the drapes, the walls, and the tablecloths. But you come to relish the singular specialties. Try the aushak—translucent dumplings filled with leeks, spinach, and fresh cilantro in a tomatoey meat sauce—or the mantoo, in which the meat becomes filling for the dumplings.

The restaurant’s namesake, the beef shami kebab, most enthralls among the grilled meats. It’s essentially a sandal­shaped hamburger, Afghan-style. Lamb kebabs, offered as boneless hunks of leg meat or as marinated chops, appeal more than the chicken. (If you’re set on fowl, order the variation on the shami kebab made with ground chicken.)

No matter the protein, entrees come with a generous vegetable side and one of three rice pilafs. Home in on the pumpkin, a staple in Afghanistan that comes in two versions: as a coarse puree sugary enough to rival any American sweet potato casserole, or sliced, fried, and blanketed with tomato sauce and yogurt sprinkled with dried mint. The sweeter one pairs well with the lamb, and the saucy one jazzes up the beef shami kebab winningly.

The pilafs hail from the Persian school of rice cookery, prepared so that every grain remains distinct and fluffy. There’s basmati boiled and then baked with just enough aromatics to lend a sweet scent; another with chopped spinach; and qabili pilau, an Afghan classic with a distinct whiff of cardamom that’s strewn with julienned carrots, almonds, and raisins. The kitchen doles out so much, you’ll start dreaming up ways to use leftover rice before you’ve finished the meal. 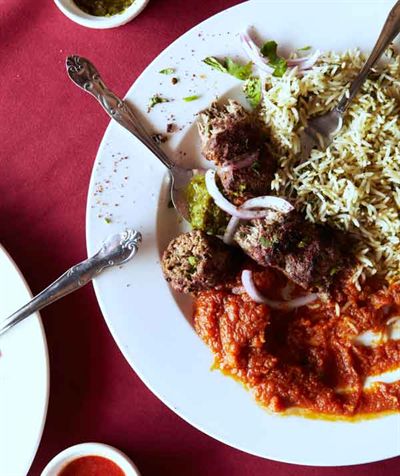