Home Fitness A Straight Man’s Ode to Ansley L.A. Fitness
The twenty-first-century gym is a burlesque under bright lights: lathered bodies, spandex, inner-thigh machines, and wall-to-wall mirrors offering intimate angles and startling curves. It follows that these facilities often function as meat markets. The L.A. Fitness at Ansley Mall serves as such for chiseled gay men. But I began going there for a different reason: It’s the closest gym to my house.
As a kid, I bought baseball cards at the ancient Woolworth’s that would eventually make way for the slick-looking gym chain. I was sad to see my childhood haunt disappear, but three years later, after my mother joined, I gave the place a shot. I was back from college, jobless, and capable of forty-five minutes of daily self-improvement. Also, I could walk there. Without quite realizing it, I’d joined a healthy reincarnation of Studio 54; protein powder, chin-up bars, and techno had replaced coke, showgirl swings, and disco. The hot pants and affectionate ass-slapping remained.
It was a shocking place for a straight young man with a pretty face. I felt, for the first time, like a piece of meat. Early on, catching a few furtive looks, I assumed a defensive posture. I’d put my earbuds in, keep my eyes down, and stalk around the back where the free weights are kept, only glancing up at the rare woman—she was a woman, wasn’t she?—who braved the sea of massive, mingling, unseasonably bronzed males.
Why continue this masochistic ritual? Despite my best efforts, I found camaraderie. Sure, it was mostly limited to grunts of “Done here?” “Can I work in?” and “Mind leaving those weights on the bar?” But it felt nice. Nonverbal communities are communities nonetheless.
One day I was benching too much weight without a spotter. I went for an extra repetition and couldn’t push it up all the way. Seeing this, a man wearing a shirt that said “Tight End” came to my rescue. He didn’t look like a football fan. But he helped me extract myself from the vise of my own weighty ambition. When I sat up, my face was beet red—both from oxygen deprivation and embarrassment. “Oh, don’t worry, sweetie,” he said, smiling. “Sometimes a spotter is just a spotter.”
Illustration by Scott Garrett
Advertisement 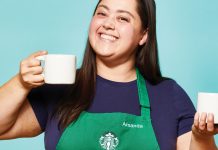 Atlanta Starbucks workers are still working toward formalizing a union