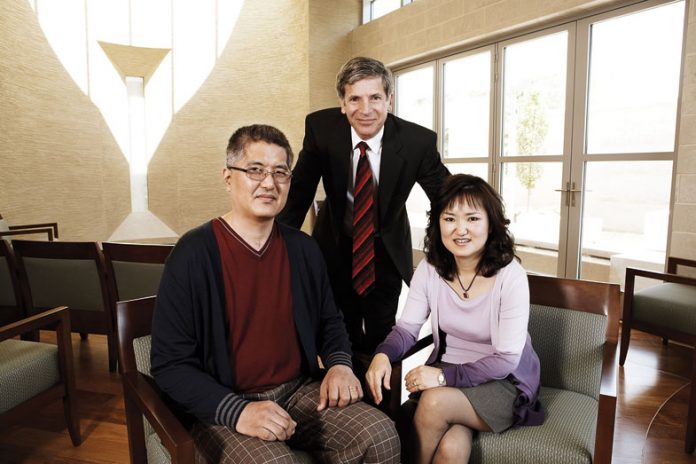 Maybe James Kinsey swerved to avoid an animal. Maybe his cell phone rang. Maybe, as the investigating officer suspected, he dozed off at the wheel on Old Fountain Road, just a half mile from his home in Dacula, after a long night shift. Whatever the cause, his Chevy Aveo crossed into an oncoming lane and was struck by another car. Too tall for the Chevy’s tiny cabin, the six-foot-one Gulf War veteran smashed his head against the door frame. The seat belt saved his life.

When Dr. Michael Stechison saw Kinsey the morning of April 21, 2009, the neurosurgeon’s assessment was almost hopeless. Kinsey arrived at Gwinnett Medical Center’s ER with every type of cerebral hemorrhage possible. The brain function assessment was grim. “He was in the deepest level of coma that one can quantify,” Stechison says. “It was almost beyond our ability to really do anything.”

The only hopeful sign was a gag reflex, so Stechison, who has more than twenty years’ experience in neurosurgery, wasn’t ready to give up. Without time to contact family, he immediately prepped for the rare procedure of simultaneous surgery on both sides of the brain. Stechison started on the left side, removing a large piece of skull so he could access and suction out three deadly clots. He did the same on the right, leaving a strip of bone down the middle similar to, as he describes it, “a T-top on an old Camaro or Corvette.” While Stechison was working on the right half, Kinsey went into cardiac arrest. The operating room staff had no choice but to start pumping his chest. Stechison had no choice but to finish surgery. “I timed my scissor cuts,” he recalls, “synchronizing them with the chest compressions so I could continue working while they were trying to revive him.”

After more than two hours in the OR, Stechison closed up the skin around Kinsey’s head and applied a dressing. The brain was so swollen it was literally rising out of the skull openings. Kinsey’s wife, Sun, had received a call from the emergency room at around 11 a.m. from her husband’s phone. She, their two sons, and her minister met with Stechison after the surgery. He leveled with her. “He said, ‘If you need to contact your family, go ahead, because he’s probably not going to make it tonight,’” Sun Kinsey says, her breath catching. A nurse asked about organ donation.

Sun and Stechison have something in common. She wasn’t ready to give up, either. She stayed, and she prayed. “One of my church members said, ‘Hold his hand, he can hear your voice.’ So I grabbed my husband’s hand and said, ‘Honey, if you can hear my voice, can you grab my hand?’ And he [squeezed] my hand and started moving his legs. All of the nurses went, ‘Don’t make him too excited!’”

Kinsey made it through that night, and all those that followed. His recovery hasn’t been easy: seven more surgeries to install a shunt to drain excess brain fluid, to remove built-up spinal fluid, and, finally, to replace the skull flap on the right and create an artificial one for the left. Eight weeks at Shepherd Center and continued weekly therapy at Glancy Rehabilitation Center at GMC-Duluth have restored Kinsey’s ability to walk, talk, and laugh at jokes. But the accident left him blind in his right eye and stole much of his memory. In addition to forgotten names and places from a life that included twenty-four years in the Army, he doesn’t recall the accident. Sun points out the spot where it happened whenever they drive by. James never remembers the place, but she keeps trying.