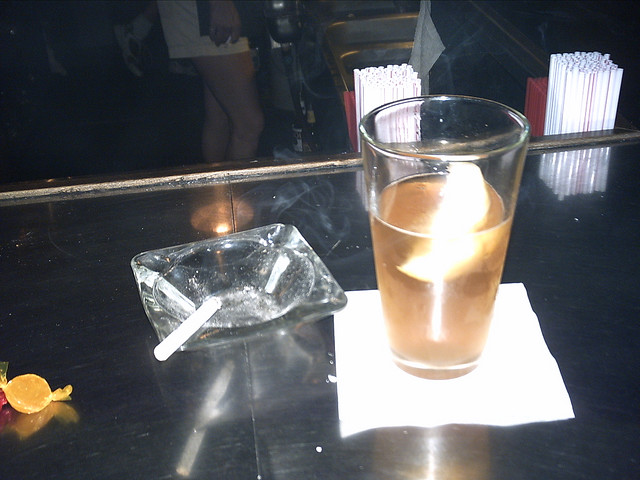 Maybe raising the cigarette tax could do more than make people smoke less. It could also make people drink less. U.S. researchers looked at data from more than 21,000 drinkers and found that higher cigarette taxes translated to reduced drinking in certain groups of people—particularly male smokers. The results were published this month in the journal, Alcoholism: Clinical & Experimental Research.

We asked Charles A. Downs PhD, assistant professor at Emory University’s School of Nursing, to take a look at the study and weigh in on all the debauchery.

Is it reasonable to assume that if a person who drinks and smokes cuts back on one activity, he’d cut back on the other?
Anecdotally, you would anticipate that a reduction in one vice would lead to a reduction in the other. For example, ex-smokers and those actively engaged in the smoking cessation process often state that certain behaviors trigger the desire to smoke—such as socializing with a smoker or having a drink. Often individuals will avoid these circumstances in order to minimize the desire to pick up smoking again. However, the difference in this scenario compared to the published study is that they evaluated alcohol consumption among smokers, but they didn’t specifically evaluate alcohol consumption among ex-smokers.

From a broader perspective, studies clearly show that increasing the cost of cigarettes (for example, through cigarette taxes) provides a financial incentive to reduce cigarette use and discourage non-smokers from starting to smoke.

The study says tobacco can increase the risk of heavy drinking. What is the connection there?
It’s common for smokers to drink and drinkers to smoke. In fact, studies clearly show a correlation between tobacco and alcohol-use, such that smoking can be used as a clinical indicator for alcohol use disorders. The reason is likely related to changes in neurotransmitters and receptors in the brain that are activated when a smoker lights-up. However, studies are inconclusive at this time.