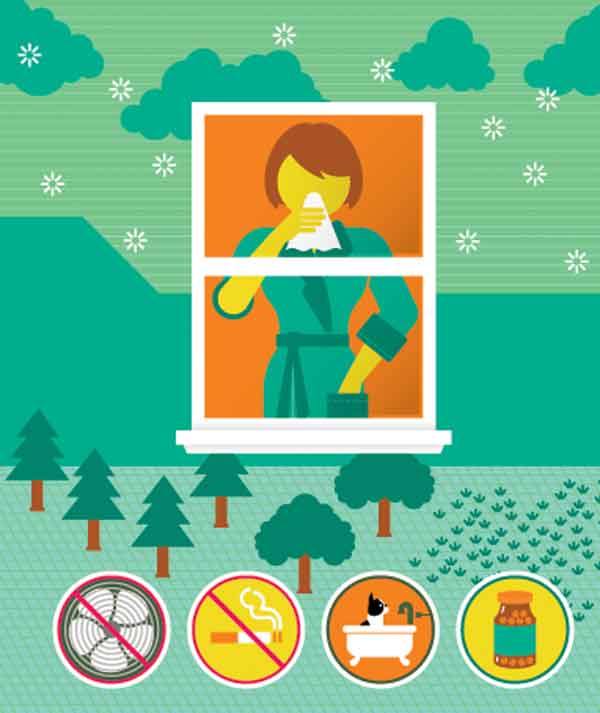 By the time metro Atlanta is covered in yellow pine pollen each year, many residents are a sneezing, red-eyed, sniffling mess. There are three distinct pollen-growing seasons every spring: pine and oak in March and April, other trees in early May, and grass from mid-May through the end of June.
“I know everybody thinks that their area is the worst [for allergies], but I think we really are,” says George Gottlieb, M.D., an allergist with offices at DeKalb Medical and in Snellville. “We have every pollen here except for a few in the Southwest, like tumbleweed.” (For the record, the Asthma and Allergy Foundation of America ranked Atlanta forty-fourth on its Spring Allergy Capitals 2011 list, but what does it know?) In addition to spring pollen, there is ragweed in the fall. Year-round we have high humidity, which breeds dust mites. Are your eyes watering yet?
If you have an allergy, the first step is simply avoidance, says allergist Stanley Fineman of the Atlanta Allergy & Asthma Clinic in East Cobb and Marietta. “You may have to look at the beautiful trees inside during exposure,” he says. Fineman’s practice is the certified Atlanta pollen-counting station for the National Allergy Bureau. The daily pollen counts are posted online at atlantaallergy.com. Avoid the outdoors when those counts get high.
Most allergy sufferers can get relief from over-the-counter antihistamines such as Claritin and Zyrtec, says Gottlieb. Contrary to popular belief, he says, you don’t have to build up the drugs in your system for days or weeks before allergy season strikes. Just take them when symptoms surface. If antihistamines don’t work, a primary care doctor can write a prescription for a nasal steroid spray.
If you’ve tried these remedies and continue to have symptoms—ranging from runny nose and itchy eyes to lack of energy and inability to concentrate—see an allergist, Fineman suggests. He or she will probably schedule a skin test and may suggest injections to help build up an immunity to allergens.
Some other tactics to try, according to Gottlieb and Fineman:
Right now there is some good news for Atlantans, says Gottlieb. “Our best months of year for allergy are July and August. We have the air-conditioning on all the time, and the humidity is quite low.” Enjoy.
Home Remedies
It’s no accident that the nation’s fastest-growing allergy, asthma, and sinus relief products company is based in Atlanta. Cade McDonald, founder and CEO of AchooAllergy.com, firmly believes that this is the allergy capital of the world. Growing up in Gainesville, he was plagued with allergies and resulting sinus infections. When he was sixteen, an allergist advised him to put protective covers on his bedding. “Of course, I never did it until fifteen years later when I was sick,” says McDonald. At the time, McDonald—who has a severe cat allergy—was also engaged to a woman with two cats. Something had to be done in the name of love. After he encased his mattresses and pillows and bought an air purifier, McDonald says, he had never felt better.
Combining his new passion for allergy relief with a void in the market, McDonald started his website and opened a retail showroom in 2001 (3411 Pierce Drive, Chamblee, 770-455-9999). “Essentially it was dumb luck,” he says. “We opened the doors to the showroom and nobody came.” But the website flourished. A decade later, it is home to more than 1,000 products, ranging from $2 pollen masks to $1,200 vacuum cleaners.
“If you’re allergic to anything, bedding is a cost-effective solution that is going to make you feel better,” he says. “If I’m sleeping next to a dust-mite-laden pillow and my immune system is already on overload, guess what happens when I walk outside into the pollen?”
Allergy sufferers can encase their favorite pillow for less than $20. But don’t plan on keeping the same pillow indefinitely; some actually come with expiration dates to remind users to replace them every two to three years.
Miele vacuum cleaners, which can cost more than $1,000, come with a HEPA filtration system and are especially popular in the Chamblee showroom. “Maybe we’re really good at selling them,” says McDonald. “But I think people like the comfort that we’re right here when they buy something that expensive.” Other products that are popular with Atlanta allergy sufferers are air purifiers and dehumidifiers.
Illustration by Jude Buffum
Advertisement