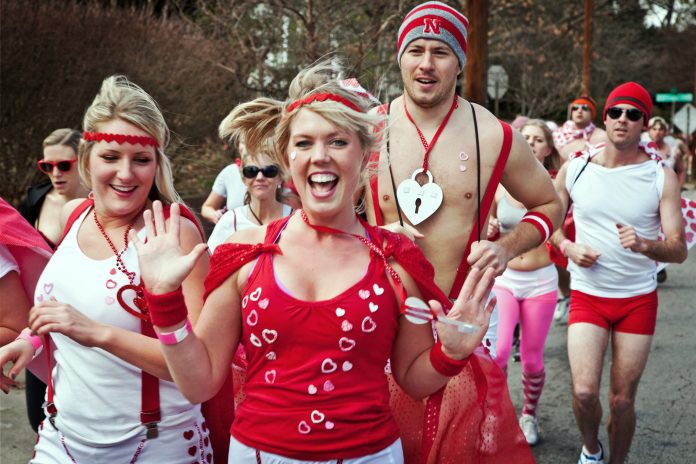 Been thinking about doing a run for charity, but can’t decide which one? There’s a race Valentine’s weekend that’s only a “mile-ish” long and that starts and ends at a pub. It’s hardly an athletic commitment, but there’s just one catch. You have to run it in your skivvies.

More than 600 people are signed up here to participate February 15 in Cupid’s Undie Run, a fundraiser for the Children’s Tumor Foundation to raise awareness of neurofibromatosis (NF). Taking off from Ri Ra Irish Pub in Midtown, it’s one of 30 Cupid’s Undie Runs being held on the same day in twenty-seven U.S. cities and three in Australia.

Originally from Lilburn, race executive director and co-founder, Chad Leathers, talked to us about his brotherly motivation and the definition of underwear.

What’s the background on the race?
It’s a crazy name, crazy event but with very serious results and intentions.
It started because my youngest brother Drew has a weird nerve disorder called neurofibromatosis or NF. There are three types and Drew has schwananomatosis. It’s a progressive disorder that typically gets worse. It causes tumors to grow throughout your body. It can cause any number of issues from blindness and deafness to learning disabilities. For Drew it was very severe, chronic pain. These tumors were growing on his nerves. He had his first tumor taken out when he was 10 but wasn’t properly diagnosed until he was 13 or 14. It started off as a small issue and became much more dramatic. There have been many culminating surgeries.

Complications rendered him paralyzed in the spring and summer of 2009. At that point, our family had been fundraising and had worked very closely with the Children’s Tumor Foundation, the world’s leader in NF research. I was doing marketing and design work and found myself working on this project. It became clear I should be doing this fulltime.

How did you come up with the run idea?
It came from my friend, Brendan Hanrahan, also a Georgia boy and class clown, Parkview High School, 2002. He said, “Let’s run around the Capitol. It will be fun. It will crazy.” So he and I and his roommate at the time organized the website and the legal arrangements that we would’ve needed to do this and stay out of jail. We estimated we would have thirty people. Within two days, we had about 230 people.
We ultimately ended with about 600 runners.

We ran around the U.S. Capitol and no one was injured; everyone had a great day. It raised $10,000 that first year. The following year we added a fundraising element and it raised $75,000. The third year it expanded to five more cities including Atlanta. A year ago we raised $1.6 million. This year we’re on pace to raise $3 million internationally.

How is Drew doing?
Drew was gracefully given the opportunity to be on a drug, actually a kidney cancer drug, and began taking it 2 1/2 years ago. Not only did it shrink some of his tumors, it also quelled a lot of the activity that was going on in the nerves that was causing a lot of pain. This drug has been a godsend, very literally. It had taken him from a bed. He lived at Johns Hopkins Hospital for 183 days in 2009. Now he just started college (Georgia Gwinnett College) again. The NF is being treated and monitored. The unfortunate reality with NF is tomorrow is a new day. We don’t know what’s going to crop up.

Any tips for newcomers to the race?
Long johns and leggings are underwear, too.

To register for Cupid’s Undie Run in Atlanta, visit This is a link to www.cupidsundierun.com/city/atlanta/.